Mary works as a secretary at a medical clinic in London. She’s somewhere in her 40s or 50s, it’s hard to say. However old she is, she’s still quite beautiful, full of energy, and a lot of fun at parties. That’s in small doses, anyway. Spend enough time with her, though, and you realize how hopeless she is. She drinks way too much. She’s constantly falling for the wrong guys. She makes terrible, impulsive decisions. A lifelong train commuter like most Londoners, she buys herself a small used car and thinks her newfound mobility and independence will set her free.


Some months later, she’s spent many times the car’s original price on speeding and parking tickets, repairs, and towing until finally the lemon has to be junked. Her life is full of ongoing tales of woe like this, and a litany of bad things that have happened to her comes tumbling out of her mouth to anyone who cares to listen and quite a few people who don’t. Yet she still desperately tells herself and everyone else that things are great, that her next blind date or half-baked idea will somehow make her happy. 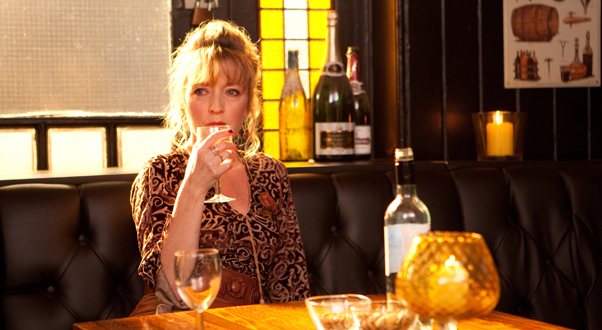 Mary is played by Lesley Manville in Another Year, and it’s one of 2010’s most powerful performances. Manville is not nominated for an Oscar this year, partly because voters were unsure whether to slot her into the Best Actress or Best Supporting Actress category and partly because nobody in Hollywood knows who she is, even though she used to be married to Gary Oldman. Regardless, she makes Mary pop off the screen: her boozy reveries, her self-pitying storytelling, the zigzag lines in which she runs. (Mary is always running, because she is always late to wherever she’s supposed to be.) I’ve heard unmarried female moviegoers of a certain age leaving the film wondering, “Am I like that?” As I said in my article on the year’s best acting a few weeks ago, Manville conjures up an uncanny sense of presence.

The film around her was a centerpiece of last year’s Lone Star International Film Festival in Fort Worth. Broken into four chapters titled “Spring,” “Summer,” “Autumn,” and “Winter,” the story spans one year during the life of Gerri (Ruth Sheen), a psychiatric counselor at the clinic where Mary works, and her husband Tom (Jim Broadbent), an engineering geologist who works on large municipal projects. Tom and Gerri — and yes, they’ve heard all the jokes — are former flower children who’ve become settled, prosperous citizens. Over the course of the year, they’re visited by a number of friends and relatives, including Mary.

Another Year is a typical work by Mike Leigh, a master of slice-of-life dramas that carefully observe the British middle class. His best movies are wonderful stuff indeed: the fiercely quirky 1997 female-buddy comedy Career Girls, the sneakily weighty 2008 comedy Happy-Go-Lucky, the grim 2004 drama Vera Drake, and even the atypical 1999 historical piece Topsy-Turvy. His films are deliberately half-formed; he’s not afraid to leave story ends hanging loose. At his best, these loose ends take on a life of their own. Besides commenting meaningfully on the main characters, they also give tantalizing suggestions about the lives that the supporting characters have going on outside the confines of the film that they’re in.

Here, though, the loose ends just seem loose. We never find out what’s eating Janet (Imelda Staunton), the ferociously guarded patient who comes to see Gerri for her insomnia, gives monosyllabic answers to Gerri’s questions, and then disappears from the film. The same goes for Ken (Peter Wight, giving a rather potent performance of his own), an old friend of Tom’s {and a fat guy} who seems bent on eating and drinking himself into an early grave. Tom and Gerri themselves aren’t that interesting, either, in their happiness. (Compare Leigh’s fascinating, layered portrait of an essentially contented person in Happy-Go-Lucky.) The couple seems to have curiously little effect on all these sad, pathetic people orbiting around them. You wonder how such a nice couple wound up with so many screw-ups for friends.

Still, there’s a great set piece that involves Mary, who’s not so secretly angling romantically for Joe (Oliver Maltman), Tom and Gerri’s 30-year-old lawyer son. So when Joe turns up at a dinner party with a new girlfriend (Karina Fernandez) whose existence was previously unknown even to his parents, it’s no wonder the smile drops right off Mary’s face. Mary spends the rest of the scene doing her best to wreck the evening, and it’s riveting and dispiriting in all the right ways. The movie may fall short of Mike Leigh’s luminescent masterpieces, but in bringing this one character so vividly to life, it makes itself important, Oscar nominations or no. Maybe you know someone who’s painfully self-deluded to this degree. Another Year makes you feel like they’re sitting across from you.