In December, the Dallas-Fort Worth Film Critics Association named Biutiful the best foreign language film of 2010. Last week, the movie picked up Oscar nominations for Best Foreign Language Film and for Javier Bardem’s lead performance. Come Feb. 27, it seems like a pretty good bet to win the statuette for the former. All this rather mystifies me; I saw about 20 foreign films last year that were more interesting than this gritty, well-intentioned Spanish-language drama that’s rather in-your-face about its grit and good intentions. 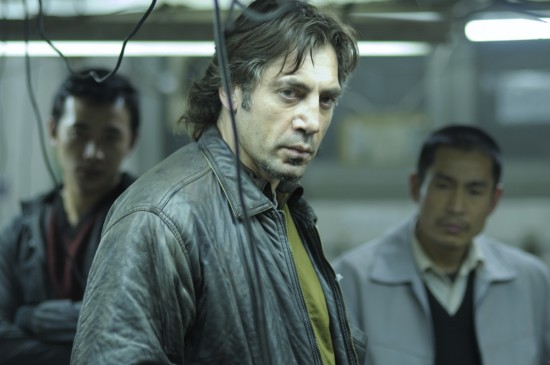 Bardem portrays Uxbal, a Barcelona man who’s scraping a meager living in petty crime, acting as a middle man for drug dealers, fencers in stolen property, sweatshop owners who employ illegal immigrants, and crooked cops who look the other way for a price. He does all this to provide for his young daughter Ana (Hanaa Bouchaib), since her mother (Maricel Álvarez) is a flaming unreliable hot mess. Yet he turns out to be desperately ill and ends up searching for a way to give meaning to his wretched life. The title comes from Uxbal’s misspelling of the English word as he helps Ana on a homework assignment.

This is the latest drama by Mexican filmmaker Alejandro González Iñárritu, whose last film Babel traversed the globe in its search for drama. Here the globe comes to him in Barcelona’s multicultural stew, as his story includes a Senegalese couple (Cheikh Ndiaye and Diaryatou Daff), day laborers in Uxbal’s employ, who are being torn apart by deportation and a gay Chinese couple (Taisheng Cheng and Luo Jin), sweatshop owners whose relationship is fraying under the strain of being so far from home.

The trouble is that González Iñárritu has fallen into the same trap that snared so many British filmmakers in the 1960s. He wallows in the misery, showing us all this wretchedness at great length (147 minutes’ worth of it) in an attempt to shake us all out of our bourgeois complacency and make us realize that people in the world actually live this way. Bardem, whose recent roles have seen him so fearsome (No Country for Old Men) or handsome (Vicky Cristina Barcelona), here looks convincingly strung-out and at the end of his rope. For all the movie’s strenuous attempts at depicting the world where it takes place, Bardem’s weariness expresses the bone-grinding reality of Barcelona’s poor better than anything else around him. His artistry exceeds the movie that he’s in.

He can’t redeem the thinness of this exercise, though. The pity of it is, last summer the director made a much better film. Unofficially called “Write the Future,” it was a three-and-a-half-minute Nike commercial that was shown on TV before and during the World Cup soccer tournament. Hilarious, lightning-paced, and crammed with spot-on details, it was glorious entertainment. The lesson here is simple: Alejandro González Iñárritu needs to lighten up.