The Imperial Court web site says the same thing, but it’s best heard in person from the reigning empress: “We serve the community $1 at a time,” said Bubbles LaRue — or to give her her full title, “Empress XXXII Bubbles LaRue, the Silver & Teal Double-Sized Triple X Butterfly Empress. She’s talking about the $20,000 to $25,000 a year that the Imperial Court raises for local causes, much of it through tips that the group’s drag queens and other entertainers bring in during performances at events like the Red and White Ball at Best Friends Club a couple of Sundays ago. There was satin, there were sequins, there was music, and there was Bubbles adjusting her boobs and Amber busting out all over. 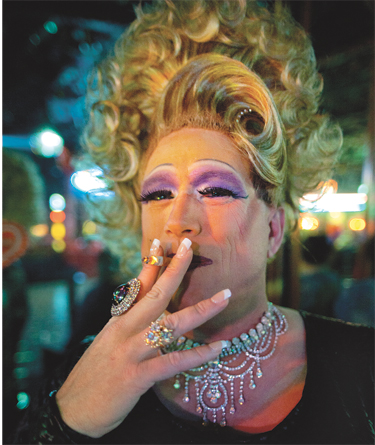 And you thought all the excitement over royalty was going on in England.

The Imperial Court de Fort Worth/Arlington has been camping it up in Fort Worth for 32 years, putting on multiple annual events at which drag queens, male impersonators, and even folks who appear as members of their own genders get up before peers and fans and sing, dance, strut, and lip-synch their ways through the evening. They’re part of an international network of such “courts,” which began in San Francisco.

Clearly, these folks have fun at what they’re doing. Amber Diva Daniels has been doing it for about 13 years. “I started it as a challenge,” she explained later. “From the first it was really exciting for me, a spotlight … . I’m in drag four or five times a week.” But she does it strictly for charity. “I couldn’t do it as a career choice,” she said.

At the Red and White Ball, Amber started the evening in a white formal outfit that wasn’t quite pulled together — literally. “I’m busting out of my dress,” she exclaimed into the microphone, doing her turn as MC. She’s 6’4” –– or “7-foot-8 with heels and hair,” she said .

She told the crowd to “drink, drink, drink” and gave a shout-out to some lesbians enjoying the show from the edge of the stage. Then she flirted with a group of beefy guys with ringside seats –– all in town for a gay bowling tournament, Amber reported, including a cop from Colorado. There was also visiting royalty from the Dallas court.

It was a little tough to figure out who’s who, although gender roles clearly matter more to outsiders than to members of the court. (March, as a matter of fact, is Turnabout Month, when folks switch the roles they normally play.) One of the royals started the evening in a tuxedo but also performed in Valentine-printed boxer shorts and a t-shirt — he used to be a drag queen, Bubbles said later, but switched to become emperor. That would be Tim Sargent, the Silver and Sapphire Blue Stinging Scorpion and reigning Emperor XXXII. He had jeweled scorpions pinned all over his tux and a sparkly crown perched on his shoulder. He likes the scorpion motif, Tim said, because “they’re little, but they get their point across.”

When you think of dancers accepting tips, don’t think strip clubs and g-strings. Think of lords and ladies being introduced at a royal pageant — each performer escorted by another to the edge of the stage to meet the tipper, a hand extended to be kissed, a few bills accepted and promptly tossed in the donations bucket, and curtsies on both sides. The dollars go to causes like the AIDS Outreach Center, Catholic Charities, Cancer Care Services, Samaritan House, and A Wish with Wings.

The court’s “line of succession” was a hoot, littered with more titles than the Queen of England’s family Bible. Beyond emperor and empress, there were various kings and queens, princes and princesses, a baron here, a duchess there.

M.B. Williams is proud to have been named Baron XVI for Life some years ago. She’s a male impersonator but also does behind-the-scenes jobs for court events. She usually performs in a tux or a “country-and-Western outfit, like a Pat Green,” she said.

Ashley walked by with her wigs on  disembodied heads. She’s been doing this for 25 years –– since Dec. 18, 1986, at a Miss Christmas Tree Pageant that raised money to send HIV-positive folks home to spend Christmas with their families. She plans to retire this December and spend more time at home with her partner. She’ll still come and watch and help the newer queens with their makeup, she said, but “I want to quit while I’m still way up there.” She’s traveled all over Texas and other states doing shows. Her family supports what she does –– they come to see her shows, and sometimes her mom borrows her clothes. This night, she’s “doing Wynonna.”

The members of the court are “the backbone of our organization,” Tim said. Being emperor “becomes a 24-7 job,” what with organizing local events and participating in coronations in other cities and states. “But if you can’t have fun doing this … .” — Gayle Reaves