The diabolically clever science-fiction film Limitless begins with Eddie Morra (Bradley Cooper), a wannabe New York writer who’s been creatively blocked for several years. After his girlfriend Lindy (Abbie Cornish) finally cuts him loose, Eddie’s chance meeting with his ex-drug-dealing ex-brother-in-law (Johnny Whitworth) nets him a free sample of a new brain-boosting pill that’s been kicking around the pharmaceutical industry. Under the drug’s influence, Eddie starts and finishes his sci-fi novel in four days, blowing his editor’s mind in the process.


Then he switches to a career in day trading and makes so much money so fast that he attracts the attention of finance mogul Carl van Loon (Robert De Niro). Eddie’s newfound intelligence gives him an irresistible high — who wouldn’t want to be able to speak fluent Italian, play classical piano, and become an expert on world history in a matter of hours? Yet as typically happens in movies like this, there’s a huge catch. Eddie’s drug connection turns up murdered, which severely limits Eddie’s supply. The pills have nasty side effects, too, especially when it comes to withdrawal. 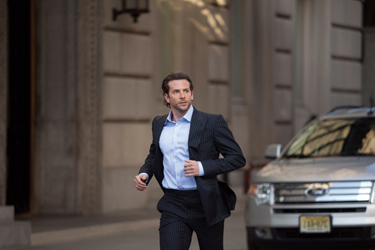 The role is a great showcase for the sharply handsome, raffishly funny Cooper, who’s equally convincing as the unkempt, feckless artiste we see at the beginning and as the clean-cut, dangerously smart operator that Eddie turns into. Cooper knows how to deploy his good looks, charm, and confidence in winning ways and also when to let them curdle into arrogant douchebaggery (or worse, as in Wedding Crashers). He performs a fine balancing act between those poles here, and he plays the middle section of the film with the exhilaration of a man who isn’t yet fully in control of his own souped-up brain. The entire movie would fall apart if it weren’t for the intelligence glinting in Cooper’s icy blue eyes.

This is the first film from director Neil Burger since his 2006 period thriller The Illusionist, not to be confused with the recent French animated movie by the same name. He and cinematographer Jo Willems are equally at home depicting the seediness of Eddie’s early surroundings and the ritziness of the world that his mental acuity gives him access to. Burger pulls everything out of his bag of visual tricks to convey Eddie’s altered state: fish-eye lenses, lighting changes, tracking shots hurtling forward, letters and numbers falling into place around Eddie as he thinks. There’s a superb WTF? moment when Eddie first takes the drug, hears someone walking up the steps behind him in his apartment building, and looks back to see himself. Burger’s direction is no less virtuoso when the movie bursts into action, like a scene in which an assassin (Tomas Arana) chases Lindy into Central Park and she does the smart thing by running toward two large muscular men jogging nearby.

The script is by Leslie Dixon, who’s not known for penning cerebral films (Hairspray, Mrs. Doubtfire, the remake of Freaky Friday). She adapts the screenplay from the 2001 book The Dark Fields by the Irish novelist Alan Glynn, and she knows that everything from Faust to Flowers for Algernon has conditioned us to think we know how this story will turn out. Her script plays quite deftly with our expectations, packing one huge surprise after another and trading in Glynn’s pat downer ending for something more logical and upbeat. Eddie’s dealings with Carl constantly shift into unexpected channels, and there’s a particularly biting revelation late in the proceedings when a screwed-over Eddie tries to figure out how he’s been outmaneuvered and then sees a CNN report that makes everything fall into place. All he can do is laugh.

You’ll laugh, too. Limitless never coheres as an Icarus-like allegory about knowledge and intellectual ambition, but it is a superb dark comedy that just happens to work as a sci-fi thriller. The story builds toward a climactic scene with Eddie hunkered down in his fortress-like luxury apartment against a group of Russian mobsters. The result is one of the funniest action sequences in recent memory, full of bumbling slapstick and sly in-jokes, plus one hilarious and distinctly sick gag as Eddie takes extreme measures to ingest the last of his pills. That’s not the last turn that this genre exercise has in store for us, but it is a memorably and delightfully depraved one in this satisfying piece of entertainment that makes you feel as if you’ve taken a smart pill yourself.