Simon Pegg and Nick Frost go on a road trip with an alien: comedy gold, right? Well, close. Paul has a lot going for it, but it doesn’t quite reach the pinnacle of genre-comedy that the talent involved would lead you to expect. But that doesn’t mean the film isn’t hilarious.

Graeme and Clive (Pegg and Frost) are two British lifelong geeks and best friends who embark on a trek to visit all of the major UFO- and alien-related locales in America, from the Black Mailbox to Area 51. But soon after leaving California, they meet an actual alien, nicknamed Paul (voiced by Seth Rogen), who seeks Graeme and Clive’s help. He’s escaped from the military base where he’s been in holding since landing back in ’47 and is trying to get to a meeting spot where he can catch a ride home, so to speak. But a trio of men in black (Jason Batemen, Bill Hader, and Joe Lo Truglio) are in hot pursuit. 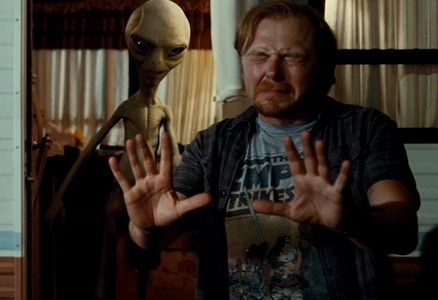 The mere presence of Pegg and Frost, who also co-wrote the screenplay, is going to draw comparisons to the duo’s previous hits, namely Shaun of the Dead and Hot Fuzz, which is unfortunate since Paul is a different kind of movie. You still can’t help but feel like something really special could’ve been done.

The three main characters have great chemistry, and Paul himself is pretty funny, poking fun at our stereotypical views of aliens. (He constantly has to assure people he’s not going to probe them.) But there’s nothing really unique to his personality beyond some crude jokes. Pegg and Frost, naturally, have great chemistry, but Graeme and Clive are pretty bland compared to Pegg and Frost’s other cinematic tandems. Another detriment is the inclusion of a superfluous love interest for Pegg played by Kristen Wiig.

Paul retreads clichés that other movies have pummeled into the ground. Yes, crazy religious types and redneck hunters do get old. What’s worse, the movie really doesn’t do enough with the premise: Paul could have been an escaped convict from Sing Sing, and the plot wouldn’t have been affected much. It’s such a shame that the story’s so unoriginal. We might be able to deduce that Edgar Wright, who co-wrote as well as directed both Shaun and Fuzz, did more than just sit in the director’s chair.

Still, these complaints come from high expectations and fall on a movie that generates more than a few laughs. The entire cast is perfect, from the big names to scene stealers like Jane Lynch and David Koechner. Paul himself is a believable CGI creation, and Rogen gets some killer lines from him. The jokes are pretty simple and lowbrow, but most land cleanly, with a handful that bring giant, lung-emptying guffaws. Pegg and Frost’s affinity for sci-fi comes through in the plentiful references, especially Paul’s wisecracks about Predator and a roadhouse band playing the Mos Eisley cantina song from Star Wars. And a gag about Paul’s advice given over the phone to a famous director on portraying aliens is priceless. There are some stinkers in there, like Wiig’s character’s learning to cuss for the first time and doing it badly, which is rarely ever funny. But despite failing to reach its full potential, Paul is a likable yarn of geek references and good humor.