If you’ve been to The Chat Room or The Usual, you’re likely familiar with Dave Mayer — he’s the guy with the longish hair, mustache, and aloha shirts who probably remembers your name and drink (especially if you tip well or order interesting libations). Among Fairmount-area lushes, he’s acquired the nickname “Captain Dave” on account of a skipper’s hat he used to wear a lot, so I was a little amused when I got an e-mail from a PR flack pitching a profile of “Tiki” Dave Mayer. 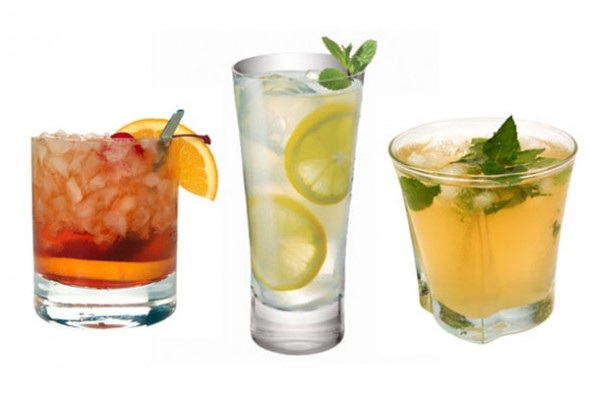 It turned out that Dave recently won the first round of the DonQ Rum/U.S. Bartenders’ Guild’s Ultimate Mix-Off Challenge, held at Cedars Social Club in Dallas. Since his entry was a throwback to the days of Esquivel and Don the Beachcomber, among many other many-splendored, legendary seaside haunts, he now has a new moniker, at least on the other side of the Trinity. I’m not one for foisting new handles on people who already have perfectly functional given names, but at least “Tiki” Dave makes sense — and besides, if you ever hear someone in Fort Worth asking for “Tiki” Dave, you can peg them as being from Dallas.

Cross-county profiling aside, I just call him Dave, and I caught up with him at The Usual last Thursday, the day before he left for New York City to compete in the UMOC. He had a row of liquors at the ready, including a bottle of Campari bitters. I was a little puzzled by this, since tiki drinks are usually more cloying than three seasons of Full House. “I found out Campari goes well with pineapple juice, and I started getting a lot of ideas,” Dave said. “Campari’s red, so it adds a lot of color, but it’s also bitters, which makes an interesting contrast to all that sweet.”

Dave’s competitive beverage, a jet-fueled libation called a Back to the Island, a.k.a. The Master of Space and Time (Lost, anyone?), combines three rums (DonQ’s Crystal and Gold plus Smith & Cross Jamaica) with Campari, pineapple juice, Dave’s Mix (a house-made blend of allspice dram, Pernod, and cinnamon-infused honey syrup), and a dash of Fee Brothers Whiskey Barrel-Aged Bitters. Dave whipped everything into a jigger, dumped it all into the shaker, and then put a bunch of ice cubes into a cloth bag and beat the shit out of it with a mallet. He poured the crushed ice into a hurricane glass, emptied the shaker over the ice, and topped it all off with a splash of soda, creating a reddish beverage that settled into three layers, garnished with a mint sprig and a flag made from a Marasca cherry wrapped in an orange peel.

As casual as he is, Dave is incredibly fast, and I had to work to keep up with what he was doing. He also pours with a surgeon’s precision and a swashbuckler’s panache, so it’s easy to see why he took his show to Gotham last weekend. The Back to the Island he made me was a refreshing blend of flavors — the pineapple and rums were the main event, but the bitters and cinnamon added a little bite to let me know this was way more than some sickly sweet Waikiki poolside punch. While it wasn’t the winning concoction at the DonQ challenge, the Back to the Island should be on your list of drinks to dive into this summer. –– Steve Steward

Hump Day at The Where House

If you’re looking for something to do tonight (assuming that you’re reading this on Wednesday), The Where House (2510 Hemphill St.) is throwing its weekly Hump Day House Party. Doors open at 8 p.m., cover is $4, and for $6, you can gorge yourself on vegetarian chili. It’s BYOB, and there’s live music: some kind of jam organized by bari-sax wizard Jeff Dazey (Josh Weathers & The True+Endeavors, EPIC RUINS, Dazey Chain). He told me he’d learned some of the music from the NES classic Adventures of Link, so bring your six crystals (or six of something, anyway) and start the weekend a couple days early. –– S.S.