That nice, friendly mayoral runoff might get frisky after all. Jim Lane is casting Betsy Price as a ’fraidy-cat who won’t debate him. She declined to debate immediately after the May 14 election and begged off again this week.


“I am very disappointed in Betsy,” Lane said. “This is a very important race for the future of Fort Worth, and it seems she doesn’t want to discuss the issues with me in a public setting.” 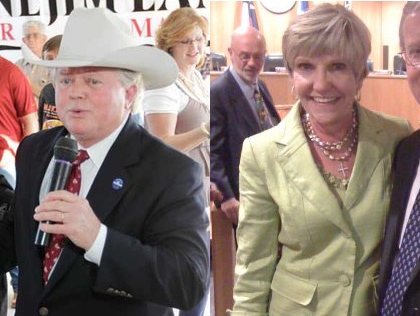 So are all those voters who dubbed Betsy Price “Mike Moncrief in a skirt” onto something? Moncrief was notorious for ignoring forums and debates. Politically speaking, it’s a smart thing when you’re heavily favored. Why risk ruining a commanding lead by debating opponents in public and perhaps saying something stupid? Price drew 43 percent of the vote in May compared to Lane’s 26 percent. And who knows what could happen in a debate against a wily attorney who has 12 years of Fort Worth City Council experience compared to none for Price?

Forget it, Price said — she’s not afraid of Lane. She squared off against him about 45 times during the various forums leading up to the general election, and they’ll face off in several debates between now and the June 18 runoff. She wasn’t notified of this week’s debate until two days prior, she said, and her dance card was full. She’s juggling a full schedule of meet-and-greets, and she’s canvassing neighborhoods relentlessly.

“It’s to my advantage to be out talking to voters and getting them back to the polls,” she said.

The Trinity River Vision project is a hot political issue for some — as in, why should we dole out about $900 million in tax money so private developers can build condos on canals? But the TRV leadership has launched an unusual public relations offensive to fight the doubters. The latest PR campaign promotes drinking booze and wakeboarding in river water filled with who-knows-what.

Beginning June 9, the TRV will sponsor concerts on the river in Trinity Park on the second and fourth Thursdays each month through the summer, with concertgoers encouraged to float on inner tubes with their beer coolers in the water. The first 600 people who show up for the inaugural “floating happy hour” get a free tube.

TRV has also partnered with a local entrepreneur for Cowtown Wakepark on a small lake created next to the river just north of Northside Drive. A wire cable will spin wakeboarders around for a fee. The TRV rock concerts are free, but the wakeboarding can get expensive. A day pass with all the accoutrements (board, helmet, life jacket, etc.) will cost about $100.

So, should Static rant about using tax dollars to pay for this huge economic development project that’s disguised as flood control? Or should we just float around on an inner tube with our beer coolers listening to music? Tough choice.