I hate to be the dissenting voice on a movie everybody else seems to love, especially when I don’t think the movie’s bad at all. Super 8 is the first film J.J. Abrams has directed that’s from an original story rather than a continuation of a series, and this odd cross-breeding of personal storytelling and creature feature is a remarkable animal in many ways. It just left me unmoved.


The film takes place in 1979 in a fictional Ohio town called Lillian. That’s where 13-year-old Joe Lamb (Joel Courtney) deals with the grief of losing his mother to an industrial accident by throwing himself into his work as a makeup artist and sound and special-effects technician on a zombie movie being made by his best friend Charles (Riley Griffiths). However, Joe, Charles, and their cast and crew find themselves thrown into an entirely different movie when a U.S. Air Force train derails near the station where they’re filming, a spectacular event that nearly results in their own deaths. This sets off a chain of strange events around Lillian: property damage, disappearances of dogs and people, and the odd behavior of a small metal cube that Joe picks up near the crash site. Military personnel swarm the town and won’t give any information to Joe’s father (Kyle Chandler), a sheriff’s deputy who takes over the department after the sheriff goes missing. The key to the mystery turns out to be in the film footage recorded by the kids’ camera, which they left running during the crash itself. 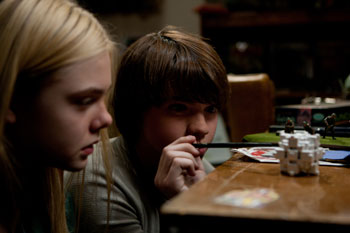 We shouldn’t be surprised that the movie is somewhat derivative. Steven Spielberg is a producer on it, and his E.T. is an obvious model, with its idyllic small-town setting, boy hero being raised by an overwhelmed single parent, and vibe of childlike wonder in the face of supernatural events. Less obviously, the rowdy and uncool boys who accompany Joe and Charles through much of this adventure recall Spielberg’s The Goonies, not a comparison you generally want to inspire.

The film is extraordinarily well-made, and it’s an even better showcase for the director’s marvelous visual talents than his Star Trek reboot. Abrams skillfully hides the creature until the climax of the movie, denying us a clean look at the thing even when it attacks a bus that’s carrying Joe and Charles. Cinematographer Larry Fong, best known for his work on Zack Snyder’s films, works wonders with half-light and night skies lit up by klieg lights, as well as the grainy stock of the Super 8 film that Charles is using to make the zombie movie.

Abrams doesn’t neglect the human element, either, and there’s a touching chemistry between newcomer Courtney and Elle Fanning (a much more natural performer than her older sister Dakota) as Alice, the zombie movie’s lead actress and a girl whose tortured family history should keep her from being with Joe. Yet for all this, the story beats are a tad too predictable — Charles’ crush on Alice and his resentment over her preferring Joe instead is easy to see coming, as are the redemptive moments for both Joe’s brusque disciplinarian dad and Alice’s pathetic drunken father. Abrams is able to keep this movie well away from abject mawkishness, but his sentimental excesses and nostalgia for the period of his own childhood do occasionally get the better of him.

The creature kills some people and leaves others alive, and the convenience with which this happens leads me to think that it has some sort of perfect understanding of human character. So this thing’s an angel, then? The beast’s mind isn’t mysterious enough; it might as well be a Transformer. The casting of relatively obscure actors in this movie is supposed to create suspense as to who will die, yet I never had any doubts about any character’s fate, even when the creature kidnapped one of our kid heroes. Maybe that’s why I spent much of the film thinking of movies that depicted the clash between human and alien civilizations more convincingly: Spielberg’s own War of the Worlds, Bong Joon-ho’s The Host, Neill Blomkamp’s District 9, or, in a far more humorous vein, Greg Mottola’s Paul, which is too recent to have been an influence on Super 8 but which has a plotline that almost exactly matches the one here.

In any event, Super 8 is a superb technical accomplishment that doesn’t leave you feeling that that’s all it is. That alone makes it stand out in the crowd of Hollywood blockbusters, now or at any other time. It ends with an ecstatic shot of a spaceship rocketing into the night sky. I wish my heart had gone with it.