By now, you’ve undoubtedly heard of the blogger calling herself A Gay Girl in Damascus being unmasked as a 40-year-old American grad student living in Scotland. Tom MacMaster is married to a student of Middle Eastern affairs, so he had some thoughts on the situation there. To draw some web traffic to his site, he pretended to be an openly gay woman named Amina Arraf and posted some soft-core erotica about having sex with other women, as well as some melodrama about coming out to her supportive father. The attention reached critical mass after his comments on a lesbian-themed site called Lez Get Real. Serious journalists started raising questions about the particulars of “Amina’s” story, and MacMaster tried to shut down his blog with a notice from “Amina’s” cousin (also invented by MacMaster), saying that she had been kidnapped. This only launched a frantic cyber-manhunt, with readers and media organizations fearing the worst. That’s when MacMaster finally came out as a man. Ironically, the same journalistic inquiries that took down Gay Girl also wound up exposing the editor of Lez Get Real, “Paula Brooks,” as a straight man named Bill Graber.

My first thought about this is, “Wow, why didn’t I think of this?” I could have used this photo and claimed it was me: 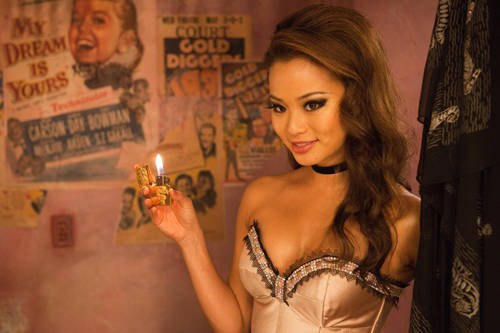 Yeah, that’s not me. It’s Jamie Chung from The Hangover Part II and Sucker Punch. But hey, Tom MacMaster used a photo of an Englishwoman to establish his identity as “Amina.” I could have done the same.

The implications of this are pretty funny, especially the revelation that “Amina” and “Paula” had flirted with each other online, neither of them suspecting that the other was a straight man. Still, the whole episode has had a chilling effect on Syria’s actual gay community, which, as you might expect, is already in pretty dire straits. In a less grim way, this is also damaging to the readers who saw A Gay Girl in Damascus as a heroine who dared criticize Bashar al-Assad’s oppressive government at seemingly great personal risk, when in fact it was from the comfort of a home in the U.K. And what about the poor French-Canadian woman who carried on a lengthy correspondence with “Amina” and apparently fell in love with her? She must be feeling ill-used right about now.

Some commentators are puzzled, but this really isn’t difficult to understand. Look at Irshad Manji, an actual flesh-and-blood lesbian and devout Muslim who criticizes Middle Eastern governments and Islamic authorities for their attitudes on women. We look at her and can’t help but wonder what it’s like to see the world from that point of view. MacMaster and Graber figured that their thoughts on current affairs would be more interesting to readers if those readers believed them to be gay. They were probably right. Honestly, wouldn’t you find my thoughts about movies and sports just a bit more interesting if you thought I was some hot young Asian woman who happened to be into other women? Wouldn’t you think Fort Worth a more interesting place if someone like that had a public forum as prominent as this one?

Jack Shafer’s think piece on Slate echoes the old notion that on the Internet nobody knows you’re a dog, but I think this episode proves the reverse. After all, MacMaster and Graber were both caught, and rather quickly, too. The same technology that allowed them to impersonate lesbians also led to them being unmasked. Their success at drawing attention to themselves sowed the seeds of their downfall. As last year’s documentary Catfish pointed out, you don’t even have to work for a giant media organization to catch somebody else in an Internet hoax.

That’s why I didn’t think of this. I would have been caught. Oh, there’s a whole raft of other reasons: I’m not dishonest enough to do it, I’m clever enough to think of other ways to write from different points of view, and I’m egotistic enough to think that my opinions are fascinating without juicing them up by lying about my identity. This is what’s on my mind as we head into a weekend when Saudi women are defying the government’s ban on them driving cars. To all the real oppressed peoples in that part of the world, this heterosexual man of mixed Asian descent sends regards.