Back in April, I went the wrong way on Alta Mere and ended up at Showgirl Cabaret. That was the first time I’d been to a strip club in probably five years, and after blowing through $60 in about as many minutes, I remembered why not. Walking out the door, I resolved to stick to bars where women take their tops off only when drunk rather than when some dude in a rayon dress shirt is clutching a wad of dollar bills.


But then my friend came into town bearing an expense account. “I got us a VIP booth at Rick’s,” he said, meaning, of course, Rick’s Cabaret. Throwing money away in a bomb shelter like Showgirl is one thing, but Rick’s is a whole ’nother level of profligacy. My brain quickly cycled through the various quick-cash scenarios I’d have to come up with to have a good time there. When I’d mentally pawned some amps, sold my DVD collection, and got up early on the coming Monday morning to get a spot in the line at the plasma clinic, I tried to beg off. “Dude,” I pled. “I’m broke. I’m gonna sit this one out.”

He wouldn’t hear of it. “It’s on me,” he emphasized. “You won’t have to pay for anything.”

I winced and acquiesced.

A couple hours later, he and I and a bunch of friends headed down the freeway. 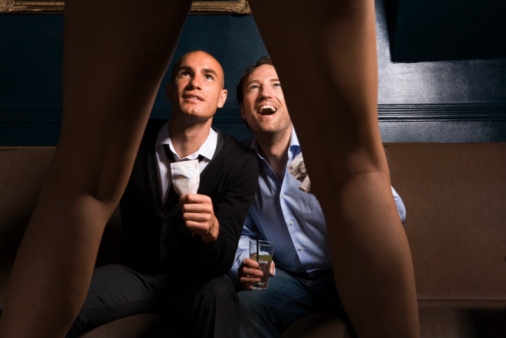 We filled up Rick’s foyer while my buddy haggled with someone I assumed was the floor manager. If had to guess, he probably started out as a bouncer, based on his frame. He herded us into a line to get our IDs checked, which was a little bit like getting corralled by the Incredible Hulk –– if the Hulk were Jersey Shorange instead of green and shopped at Men’s Wearhouse. He boomed that because we had so many people in our VIP booth, we had to have bottle service. This was a first for me; I think bottle service is kind of slimy if you’re anyone besides Jay-Z, who doesn’t bat an eye when dropping seven bills on three bottles of liquor. I grimace buying a 30 pack of ’Stones.

Granted, it wasn’t my money, so I followed Orange Hulk up the stairs to the VIP area. Our spot was a darkened alcove ringed by a U-shaped couch. In the middle was a table with cocktail service set up around one of our overpriced bottles of Jack, accompanied by some melted ice, a carafe of cola, and another one of Sprite — I drank the whiskey neat. And then we sat. For a while. When a stripper finally appeared, nobody really answered her enthusiasm — I had the sinking feeling that we were expected to make it rain, so I got up and headed back down to the main room, where my cash would go further. But before I left, a different dancer had cast her sales magic on and whisked away a member of our party into the mysterious environs of a private room, a.k.a. $300-an-hour-land. It was sort of like watching those shadow demons drag the bad guy to hell in Ghost, except with more nudity and presumably far less screaming.

The cavernous, gel-lit expanse of the main room is more my speed, anyway — I’m much more keen on cold beer than warm whiskey, and it’s easier to enjoy myself when nobody is waiting for me to flash a handful of Benjamins and disappear for 60 minutes. Some guys joined me in my retreat to the cozy confines of the main stage, and by the time a few of us found a table, it was a little after 1 a.m. The club stays open until 4, but at 2 a.m., they bring out the complimentary buffet. As much as I am a sucker for legs, it’s the eggs that always hook me, because at Rick’s, eggs are free –– as are the delicious stacks of bacon, sausage, potatoes, and biscuits with gravy. Yeah, I’m a cheapskate, but it’s not like I didn’t spend my fair share. I threw some singles around, most of which landed under the waistband wrapping the hips of a dancer named Marley. Having dropped another $14 on a couple of beers, I kind of wished I’d gone earlier — Rick’s happy hour lasts until 8 p.m., after which domestics and wells jump up two bucks to $5.75 per. “Pour Some Sugar on Me” pumped out of the PA. I got a plateful of potatoes and put my last two bucks in the tip jar. All in all, pretty fun, I guess. And I’m glad I didn’t wear my rayon shirt. –– Steve Steward