Here’s the thing: I love dive bars and all, but every so often, one’ll give me a case of the willies strong enough to make me turn tail and head for some place presumably safer. I like to call it my stabby sense, and the other night, after driving to a shady part of town and parking in front of a couple shady-looking joints about which I knew absolutely nothing, I was at stab alert level orange. That’s why I put the car back in gear and went to Overtime Bar & Grill instead.

I’d been wanting to do a column on bikini contests anyway, because you can find one somewhere in town just about every night of the week. Overtime’s contest falls on Mondays, so after I bailed on Jack the Ripper’s Puncture Trauma Tavern, I found myself heading north on Beach Street toward Loop 820. Right past the yellow resignation of a Waffle House sign sat a veritable fortress banded in purple neon so bright you can probably see it from Mars. 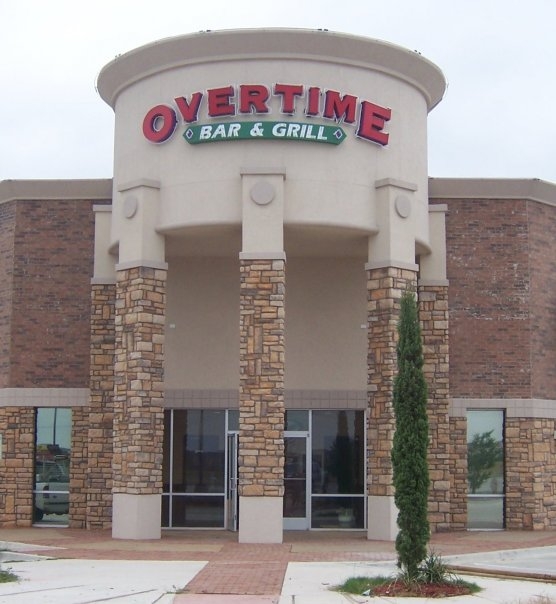 I was pleasantly surprised to find the parking lot mostly full; curiously, even though there were a lot of people inside, the place didn’t look crowded. Maybe it was the lofty ceiling — there’s no second floor, but Overtime looks to be at least two stories. High above your line of vision is a row of gigantic flat screens, alternating between sports and music videos. Drafts were on special ($2), so I parked it at the bar (a handsome semi-circle of polished granite ringing a large, round wooden shelf full of booze), ordered a Bud, and watched a Jay-Z video involving flaming basketballs and graffiti stencils. Jay-Z gave way to “Drop It Like It’s Hot.” I looked around the room for bikini models.

While there were a couple women who would’ve qualified as entrants, I didn’t want to stare, especially since they looked like they were there with boyfriends. I started to wonder if the bikini contest was still on, but then around 11:30 p.m., I saw two young ladies pass by carrying duffel bags. The women disappeared into a room by the bar, emerging a little bit later with very little on. A barback squeezed between the pair to return some rocks glasses. He didn’t bat an eye, even though he was short enough for his eyes to be at chest level.

Eventually, five lovelies lined up at the end of the room on a short stage while another lass (still in a dress) emceed. She was a pro, but I couldn’t really hear the rules or what the prize was. Not that it mattered — it’s not like I was watching The Price Is Right. As you might imagine, a bikini contest entails calling out a contestant, playing a rap/rap-rock song for her to do that booty-clapping thing to, and then calling upon the crowd to “give it up!” for so and so. The contest took all of 20 minutes, including a break.

When I initially rolled up, I had assumed everyone was there to watch the show, but the applause was a little tepid. At least until “Whitney” took the stage — I’m guessing she’s the reigning champ, because the crowd went comparatively wild for her. The rest of the contestants wasted no time in getting back into their dresses. I was three or four beers deep by then, so I figured I’d call it a night. Since it was busy, the bartender took a little while to sign me out, giving me more time to ogle the scenery.

The T&A notwithstanding, Overtime is a pretty classy joint, certainly for a sports bar. I got a little weary of nonstop hip-hop, but overall the place has a great vibe, friendly service, and good prices. While you’re probably more apt to see a wider variety of sports at the Fox & Hound, I got the feeling that finding a table to watch a game is easier at Overtime than at a lot of other places. And if Monday Night Football ends up airing this season, you’ll get some pretty good eye candy with the game. And all without getting stabbed. –– Steve Steward