It seems eminently logical that a New Orleans jazzman and an English rock guitarist would find common musical ground. And so we have Wynton Marsalis and Eric Clapton Play the Blues, a broadcast of a performance at Lincoln Center by the two legends. The screening is at 7:30pm at various movie theaters; check Calendar for locations. Tickets are $12.50. Call 818-761-6100. 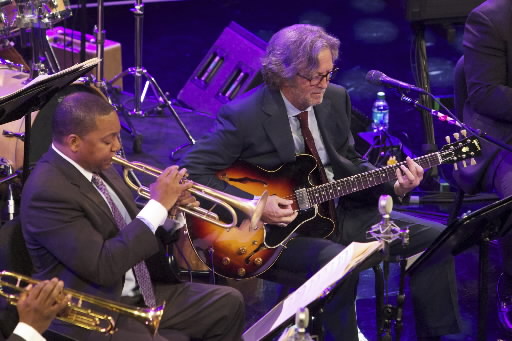 Hailed by The Village Voice as “a sweet, stealthy film about creating meaning in your life,” The Happy Poet is a comedy about a man (played by writer-director Paul Gordon) trying to start a vegetarian hot dog cart business. The Austin-made movie, which enjoyed a flashy premiere at the Venice Film Festival, plays here tonight, presented by the Texas Independent Film Network and Lone Star Film Society. The movie begins at 7pm at Modern Art Museum of Fort Worth, 3200 Darnell St, FW. Tickets are $5-7. Call 817-924-6000.

An early play by the martyred Spanish playwright Federico García Lorca, The Butterfly’s Evil Spell is a fable about a butterfly stranded for a while among crawling insects. This is Hip Pocket’s second production of the play — the first was 30 years ago. The play runs Sep 9-25 at 1950 Silver Creek Dr, FW. Tickets are $8-15. Call 817-246-9775.

While the Fall Gallery Night will be overshadowed this weekend by the 9/11 tributes (see sidebar), there’ll still be tons of stuff to see tonight. Highlights look to be Artspace 111’s Big Bend-themed show, Brand 10 Artspace’s exhibit organized around the theme of identity, and William Campbell’s display of Kris Cox’s paintings. The festivities run noon-10pm at various galleries. Check Calendar for locations and contact phone numbers.

As a bonus to its weekend film series, the Modern is offering an author’s appearance in conjunction with this weekend’s showing. Vera Farmiga’s Higher Ground drew lots of acclaim at last winter’s Sundance Film Festival, and this afternoon Carolyn Briggs will be at the museum to sign copies of her memoir This Dark World, upon which the film is based. The author appears at 2pm at 3200 Darnell St, FW. Admission is free. Call 817-738-9215.

Like the song from which it takes its title, Joe DiPietro’s comedy Over the River and Through the Woods is usually performed during the holiday season, but Artisan Center Theater is choosing early September to open this play about two Italian-American couples dangling an available young woman in front of their unmarried grandson to keep him in New Jersey. The play runs Sep 9-Oct 1 at Belaire Theater, 420 E Pipeline Rd, Hurst. Tickets are $9-16. Call 817-284-1200.

Franz Liszt was born 200 years ago this year, and the Cliburn Concert Series marks the occasion (and begins its new season) with Louis Lortie. The Canadian pianist will spend the entire evening performing one work, Liszt’s Années de Pèlerinage (meaning Years of Pilgrimage), a large-scale piece evoking the composer’s travels in France and Switzerland. The concert is at 7:30pm at Bass Performance Hall, 555 Commerce St, FW. Tickets are $15-90. Call 800-462-7979.