On Friday I vowed not to expect a win during last night’s game against the Jets; my hope was for the Cowboys to make it to New York and back safely despite a vague threat of a terrorist action at the 9/11 anniversary.

“Talk about gutless,” a friend texted shortly after Tony Romo threw the game-ending interception in the final minute.

Earlier, Romo fumbled near the goal line on third down instead of protecting the ball and ensuring a field goal to protect the team’s lead. It was obvious Romo was going to come up short of the goal line. The smart thing is to slide feet first and protect the ball. But he attempted to take on tacklers. That’s another example of Romo blowing a clutch situation, like when he fumbled the snap on a field goal attempt and lost the playoff game against Seattle Seahawks in 2007. 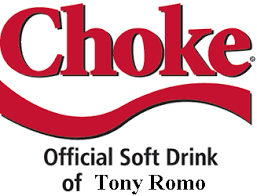 Bleacher Report once called Romo “the biggest choker in NFL history.” And this New York writer proved clairvoyant, writing in a blog post yesterday afternoon, “Will Tony Romo choke and lose the game for his team as he has done so many times in the past?”

Yes, Romo choked. Again. But he wasn’t gutless. It’s courageous for a quarterback — especially one playing for the first time since breaking his clavicle bone — to lower his shoulder and try to plow through defenders like he did on the goal line in the fourth quarter.

The Jets are a good team, playing at home in front of a huge crowd and a national TV audience, representing New York and, in a way, all of America last night. They played their hearts out and overcame their own quarterback’s brain farts. They earned the win.

Before the game started, a TV camera caught Romo slapping hands with teammates and encouraging them to play hard. He showed a fire I hadn’t seen in him before.  After the playoff loss against Seattle a few years ago, Romo cried in the locker room, devastated about fumbling a snap. After last night’s loss, he took responsibility for blowing the game with his crunch-time fumble and interception, but he didn’t cry or whine. He came across like a leader willing to take it on the chin and then get back to business.

The Cowboys proved last night they can play against an elite team…at least for three-and-a-half quarters. I’m betting coach Jason Garrett, Romo, and the rest of them learn to close out games. They’ll make a run at the playoffs again this year. Don’t give up on them yet, even though a Fort Worth Star-Telegram survey shows the majority of voters would rather “blow this thing up and find somebody else” than to stick with Romo any longer.