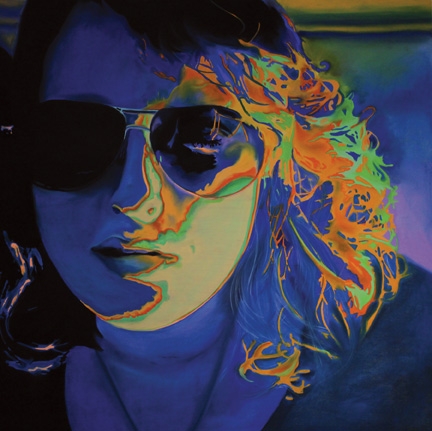 I said, Where my hot, young Fort Worth artists at?!

Oh, wait! I see you. All the way in the back there. With your Cosby sweater on. And a warm, fresh glass of Pepto in yo hand. That’s cool. That’s cool.

Nope. At least if we are to extrapolate from the art currently hanging in the handful of progressive galleries in town. Am I exaggerating a smidge to underline a point? OK, fine. The photorealist work of several fresh-faced BFA’ers from the University of Texas at Arlington can be admired at Gallery 414, and there’s one artist’s name that rings a bell at the Moudy. But, otherwise, the pickin’s? Pretty slim.

Now if you’re from Dallas or Denton (or anyplace else for that matter) you’re probably doing just swell in Fort Worth now. Actually, I’d say that Dallas and Denton artists, of all ages, are better represented in Fort Worth’s progressive galleries right now than under-40 artists from the great 817. Gaffes & Informations, the current exhibit at the normally non-817-flavored Fort Worth Contemporary Arts (Fort Worth Contemporary Arts) is by two young Dallasites, and the majority of wall space at the often very 817-friendly Fort Worth Community Arts Center is devoted to out-of-towners.

All of which is, of course, a crying shame. Well, you say (in your whiny, annoying, high-pitched voice), maybe there just aren’t any progressive young Fort Worth artists in town. To which I would stand back, inhale deeply, and shout, Brandley, Budd, Harding, Lassen, Nowlin, Yarborough! –– and that’s without even consulting my handy List O’ Hot, Young Fort Worth Artists that I whip on occasion (some would say, much too often). Well, you go on (annoyingly), maybe all of Fort Worth’s quote-cool-unquote artists don’t want to exhibit here –– maybe they think that Fort Worth is too backward for their zaniness.

Now, my incredibly annoying friend, you may have a point. For his relatively recent anthropological installation piece, “Come On Guy,” in which frat bros from the wild got shit-faced behind glass in a gallery, Richie Budd had to take his crazy spirit to the Big Apple (“Hoist a Bud to Richie Budd,” Apr. 14, 2011). And until his recent one-man’er at Gallery 76102, I can’t remember the last time Timothy Harding had a solo show here in town.

And, yes, Fort Worth is located in Tarrant County, one of the reddest counties in the entire thick-as-a-brick-red Lone Star State, and most of the galleries here skew toward watercolor society-esque politeness. But Fort Worth has not been without its glimpses of artistic derring-do. Remember Microaudiotellarevolution (“The Revolution, Televised,” Feb. 18, 2009), Chris Blay’s one-man show at Gallery 414 a couple of years ago? Dude covered an entire wall in vintage tape-recorders simultaneously playing back his voice reading from assorted scripts, and in the (unlit) back gallery, the artist offered a dollhouse-sized shanty shot through with flashlight beams and peopled by little army men. And don’t forget all of the insane Fluxus exhibits that have hung at FWCAC over the years.

However, regarding the current timeframe: For the past 35 years, the Fort Worth Art Dealers Association, a local business association, has set aside a single autumn evening for Fall Gallery Night, a gallery-walk replete with free cheese cubes and unlimited plastic glasses of Franzia. Fall Gallery Night is the time for all of the local galleries (nonprofits and academically based included) to kick off the fine-arts season and boast new and exciting work. Fall Gallery Night 2011, celebrated two Saturdays ago, witnessed perhaps the largest turnout ever, which was probably anticipated — the recent emergence of Facebook as a marketing tool nonpareil was no doubt largely responsible for the drastic uptick in foot traffic. Why then did most of our progressive galleries opt to show non-Fort Worth work, especially when most of our progressive galleries rely on Fort Worth artists throughout the year and when, well, Fort Worth is home to a lot of progressive artists?

Obviously, the most likely answer lies in an undetermined set of variables that aligned themselves to produce a set of non-817-friendly circumstances. In other words, no sinister plot is afoot. But what if Fort Worth’s persistent standing as a dreary ol’ backwater has run off our progressive talent? Maybe Brandley, Budd, Harding, Nowlin, and Yarborough were here a minute ago but have discovered the miracle of automotive transportation and absconded  to some faraway fairyland like Dallas or Denton. Or Austin. Or Plano. If so, I must extend my deepest apologies to the progressive gallery owners whose civic pride I’ve undoubtedly sullied. But maybe, just maybe, in the 16th-largest city in the United States, according to the most recent census data, our Brandleys, Budds, Hardings, Nowlins, and Yarboroughs are merely trapped beneath white-tablecloth-covered tables weighted down by big, juicy sirloins or are in an eternal battle with the dreaded dark (and bold) lord Mr Coffee. Or maybe, just maybe, there’s just not enough support here — commercial, academic, and critical — for our progressive artists to thrive.

As the only underground/non-mainstream art critic in the entire county of Tarrant, I’m probably partly to blame for their lack of recognition. But, no, I actually haven’t thought about going door to door and asking the “man” of every house in the county if there’s an artist on the premises and, if so, may I see his or her etchings, please?

A more likely scenario, in my humble opinion, is that Fort Worth’s tastemakers (looking at you, curators and gallery owners) are either A.) not making themselves available to Fort Worth artists or B.) purposefully ignoring Fort Worth artists, mainly *sigh* to educate us, because we all know that Fort Worth is where trends come to die horrible, unspeakable deaths, not rise to life.