Hot on the heels of 50/50 comes another movie about cancer, the less funny, more irritating, and all-around inferior Restless. The unfortunate timing doesn’t flatter the newer movie, but then again, even had Gus Van Sant’s romance been released late last year or earlier this spring (two planned release dates that the film was previously slated for), it still wouldn’t have measured up. 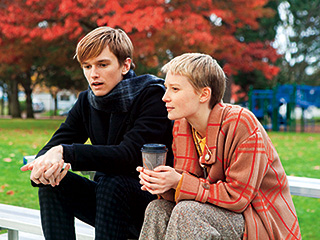 The main character is Enoch (Henry Hopper), a kid who has dropped out of high school after his parents were killed in a car accident and now copes by attending strangers’ funerals and blending in with the mourners. That’s how he meets Annabel (Mia Wasikowska), a waifish girl who wears a succession of stylish hats that cover up the close-cropped hairdo of a recent chemotherapy patient. They fall in love, but her illness means that their romance is tragically doomed.

We’re told that Annabel has a brain tumor, but she’s really suffering from Old Movie Disease, a peculiar affliction in which the patient becomes more beautiful as she approaches death. (Thank you, Mad magazine.) Any honest discussion of mortality and illness is buried under the layers of quirk slathered onto this film, the most noticeable of which is the subplot involving Hiroshi (Ryo Kase), the English-speaking ghost of a World War II kamikaze pilot who’s visible only to Enoch. There’s also a remarkably tone-deaf bit in which Enoch and Annabel stage a prettified death scene for her. It’s supposed to comment on the artificiality of other stories about dying young, but it only points out this movie’s artificiality. Director Van Sant is so intent on creating a mood of gossamer lyricism that his movie turns cloying and saccharine.

Wasikowska at least brings some genuine warmth to her role, though she can’t project much depth, because Annabel takes her imminent demise with such saintly equanimity. This girl doesn’t rage at the dying of the light; that’d be too inconvenient and real. Meanwhile, Hopper — a newcomer to acting, the son of the late Dennis Hopper, and the latest in a line of fragilely beautiful young leading men in Van Sant’s films — is given more to do, but he never locates the pain that this boy is trying to keep at arm’s length through his outsized eccentricities.

The operative comparison might not be 50/50 but rather Submarine, the Welsh film from earlier this year about another morbid kid who’s brought up short when he’s faced with the realities of death. A little of that movie’s wit or perspective would have gone a long way toward leavening the proceedings here, but none is forthcoming from Jason Lew’s script. All in all, Restless offers very little on its subject. The soundtrack is filled with diaphanous songs by Nico and Sufjan Stevens, but a syrupy piano-and-strings arrangement of “Where Do I Begin?” would have been more appropriate.