There’s a difference between coolness and coldness. As an actor, George Clooney is cool, and the even-keeled assurance he projects onscreen often informs the movies in which he stars. As a director, he’s cold, and though his films are sharp, stylish, literate, well-acted, and animated by interesting ideas (with the curious exception of Leatherheads), they often fail to engage your deeper emotions. So it is with his fourth directorial effort, the handsomely appointed political thriller The Ides of March. Thoroughly embittered with the electoral process, this cynical movie may well find an audience among voters disenchanted with their political leaders, which certainly seems to describe everybody these days. Still, the movie’s awfully frigid to the touch. 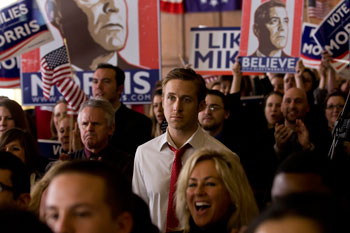 The story takes place during the tense days leading up to an Ohio Democratic primary election that’s essentially a race for the White House, with the Republicans unable to field a serious nominee. While front-running Pennsylvania Gov. Mike Morris (played by Clooney himself) tries to close out a pesky challenger, his 30-year-old hotshot media-darling campaign strategist Steve Myers (Ryan Gosling) makes two errors of judgment. First, he falls into bed with a 19-or-20-year-old office intern (Evan Rachel Wood). Second, he secretly meets with the opposing campaign manager (Paul Giamatti) to listen to a job offer and then neglects to tell his boss (Philip Seymour Hoffman) about it. The latter appears a more serious offense, especially after word of the meeting leaks to a New York Times reporter (Marisa Tomei). Yet it’s the dalliance with the girl that leads Myers to information that could destroy Morris’ candidacy and career.

The film is based on Beau Willimon’s Farragut North, a stage play that debuted in 2008 but was inspired by Howard Dean’s 2004 presidential run. Clooney’s direction is expectedly tidy, with cinematographer Phedon Papamichael and production designer Sharon Seymour doing justice to both the shabbiness of the Morris campaign headquarters and the glitz of the TV studios and campaign stops. Clooney and his co-writers (Willimon and frequent Clooney collaborator Grant Heslov) are quite at home with their characters’ politically tinged banter.

The same goes for this deluxe cast. Giamatti stands out amid the supporting players, revealing (in a great scene near the end) a man whose soul has rotted away from his win-at-all-costs mentality. Clooney himself excels in an atypical part as a big wheel who’s not used to being cornered and doesn’t like it one bit. In the lead role, Gosling projects calm as always. Many actors think that projecting calm means not reacting to anything, but Gosling’s too alert to make that mistake. As fast as Myers talks here, you can still feel him weighing his words carefully while dealing with a host of others who all have their own agendas. During the ultimate confrontation between Myers and Morris, Gosling’s eyes register equal parts “I’m holding all the cards here.” and “Oh crap, what am I doing?,” and that tension makes his character’s plight compelling.

So well does Gosling play this smart operator that you can’t believe Myers would be blindsided by discovering who ratted him out to the Times, though you believe that he’d take the meeting and sleep with the intern (the latter in no small part thanks to the blazing sexual chemistry between Gosling and Wood). The plot as a whole feels overdetermined, even with a few issues left dexterously and tantalizingly unresolved. Clooney and company fail in their attempt to broadly critique the American political system: Their jaded depiction of the horse-trading and dirty deals necessary to gain power doesn’t tell us much new, and they largely miss the real source of the current discontent with politics — the seeming inability of leaders (in America and elsewhere) to forge a new way ahead. This would matter less if the movie worked as a human tragedy, but neither the metaphoric death of Myers’s idealism nor the actual death of one of the characters comes close to the tragic force that they’re meant to achieve.

All this still leaves us with a neat little story about a clever guy who has to maneuver out of an increasingly tight spot of his own making. The Ides of March works pretty well as such. Yet this drama has its eye on much greater ambitions, and it falls short despite all the talent that goes into it.

The Ides of March