For years now, Fort Worth painter Sarah Green has been delighting viewers with her whimsical, colorful digital paintings –– she uses a pressure-sensitive pen on an electronic tablet. Most of her paintings have been portraits and most of her subjects celebrities, ranging in star power from Bette Davis in her prime to the cast of the painful and painfully funny reality TV show and film series Jackass. Her new exhibit, Allure and Utility, at Artspace 111 through Dec. 7, is less about celebrity and more about sociology, which proves to be dazzling to the eye, intriguing to the mind, and, for most red-blooded American males, electrifying to the pants. 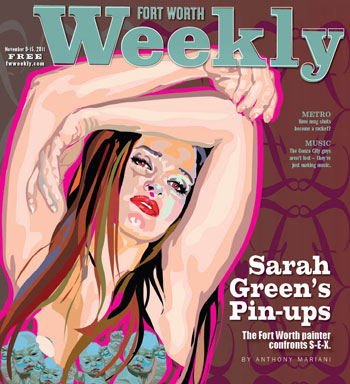 Allure and Utility is one of the most tantalizing local exhibits since Fort Worth painter Jesse Sierra Hernandez beautified the walls of Gallery 414 with his voluptuous female nudes nearly a decade ago. Hernandez’ work celebrated and even exaggerated the curvaceous nature of the average attractive woman out of a kind of refined European romanticism; Green presents us with a cipher –– the stunning Los Angeles model Taylor Vlahos –– who in her delectable lingerie and awkward situations introduces cold, hard reality into our lives with all of the ceremony of a sucker-punch. In a heady way, Green offers softcore pornography that’s sad and whimsical at the same time.

Green is something of a semi-famous artist. Her work is in the collections of such diverse folks as late President Gerald Ford, classical music hero and Fort Worth native Van Cliburn, punk godfather Henry Rollins, and the Jackass dudes. She began digital painting several years ago after the toxicity of dealing with lead-based paints got to her. Trained by her late artist-father Christopher Hill, the fiftysomething Green grew up in England drawing obsessively and after relocating with the family to Fort Worth, earned her degree in vocal performance from Texas Wesleyan University in 1984. As her work indicates, Green started out in art via commercial projects.

Her last major exhibit was in 2006 at Artspace 111. In My Father’s Chair featured a selection of movie-star portraits inspired by early, super-glam Hollywood. Four of the 10 pieces that make up Allure and Utility are devoted to that particular fascination of Green’s and are all in black and white. In “If I Wanted,” Bette Davis looks askance at Joan Crawford in the background, who, with a confident smirk, asserts (via speech bubble), “If I wanted him, I could have him, and there’d be nothing you could do about it.” The point seems to be Look at how catty women once were. The overall point, however, is the technique. In only a few squiggly lines and with lots of negative space, Green can capture a gamut of emotions. 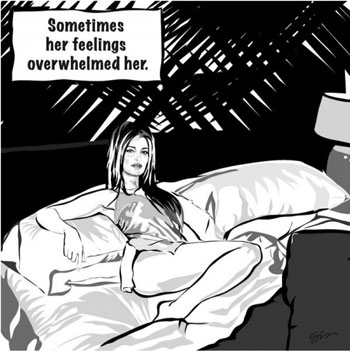 Though the artist works from photographs, she’s hardly detached. Her portraits of Vlahos are full of psychic power and openness, her everywoman ensconced in the now, vibrant, as real as flesh against flesh. Green’s work has never been more evocative and vulnerable, rooted in conceptual irony but far from ironic, a piercing knowingness suffusing Vlahos’ limbs, eyes, and even her hair with desire, repulsion, and humor. The color portraits could have come straight from a Vogue magazine editorial spread. In “Scrub, Girl, Scrub,” the brunette model is shown on all fours in red underwear and leopard-print heels with a rag in her hand, wiping a floor littered with used condoms. The look on her face is distant, blank, as if she’s looking through an undetermined point behind the viewer. Fans of Sports Illustrated’s annual swimsuit issue will recognize the pose but might blanch at the details. “Scrub, Girl, Scrub” is a static piece of performance art, igniting our lust, pity, and protection simultaneously and is a powerful statement.

In the supremely vertical piece “Stick Stuck,” Vlahos stands sassily in black lingerie, thigh-highs, and heels with a glamorous but serious expression on her face and in her right hand a positive home pregnancy test –– the little “+” sign glows red. Though she’s dressed for sex, she’s probably, y’know, not in the mood. But with Vlahos’ self-awareness and dangerous curves, the piece manages to radiate humor, as if acquiescence to the dreaded male gaze were some kind of art stunt. The Bumpit in her hair is pretty funny, too, though probably not intentionally.

In a press release, Artspace 111 publicists describe Allure and Utility as an exploration of “the classic struggle of how to balance the alluring sex goddess with the utilitarian homemaker within us.” Fair enough, if rather Mad Men-ish in outlook. In “Fresh,” the most humorous piece in the show, Vlahos sits on the floor in a pink negligee with her legs curled to one side, immaculate white maxi-pads floating and landing all around her. The statement? Not sure, but the impressionistic grace with which Green renders her sitter is intoxicating –– the ostensible frills of Vlahos’ clothing consist of variously sized Ben-Day dots, and the pinks are solid but also somehow soft. And in the black-and-white “Feelings,” Vlahos sits in the same position on a bed below the phrase “Sometimes her feelings overwhelmed her.” What’s Green trying to say? It’s unclear. Vlahos could just be getting ready to watch a three-Kleenex Lifetime movie. But her face is alive and practically photorealist in its execution.

But the press release goes on, “At first glance, the overtly sexual works of art appear as naughty, daunting, and risqué, but upon a closer look, they portray a powerful social commentary about a sex-driven society’s objectification of women and the abuse and sublimation the women themselves experience.”

Eh, not sure about all that fancy talk. Some pieces are just hot. “Blue Boy” is nothing more than a sharp, elegant portrait of Vlahos turning away from us to afford us a glimpse of her shapely derriere in black bikini briefs and offer us a come-hither look over her shoulder as she twirls her hair coquettishly. Similarly, there’s not much to “Eve II” and “Binkie” other than Vlahos as sex object –– in the latter, she holds a pacifier, is dressed in a pink negligee and thigh highs, and looks like a kid who got her hand caught in the cookie jar. Green is commenting on the fetishization of women as hapless damsels in distress, but whatever. Vlahos looks great.

The only piece that comes close to realizing the dense theorizing is “Hula,” a portrait of Vlahos with her arms wrapped above her head and a wanton look on her face, wearing a bikini of blue infants: not images of blue infants but multiple copies of the same blue infant. There’s nothing model-y about her expression, and its naturalness battles the disquieting babies for our attention. In being the least literal piece in the show, “Hula” is easily the most provocative. Green takes the literal out of painting and suggests that by transcending the obvious and seeing things anew or differently we become enlightened, hot or not.

Allure and Utility, by Sarah Green