OK, here’s one of the more messed-up things I’ve seen in a while, and I mean that mostly in a good way. Much of the chatter about The Skin I Live In has been about Pedro Almodóvar’s reunion with Antonio Banderas, his habitual leading man and sexual touchstone during the 1980s.


The real story, though, is the return of Almodóvar the shock artist who tore through world cinema in the 1980s and early ’90s, offending all kinds of sensibilities through stuff like Kika and Tie Me Up! Tie Me Down! The director seemed like he’d outgrown that phase, spending much of the last 15 years making warm, glowing, humanistic masterpieces such as All About My Mother and Talk to Her and Volver. We all thought the shock jock was dead. Well, he’s back now, and he has grown subtler with age. Instead of spraying the room with machine-gun fire, he now knows how to quietly slip the knife into just the right place. I don’t know where Almodóvar goes after this, but his movie is queasily fascinating to watch. 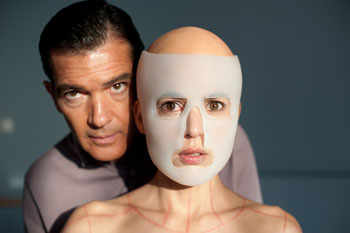 Banderas portrays Robert Ledgard, a plastic surgeon in Toledo who has won wealth and acclaim for developing new methods in reconstructive surgery but has also made enemies among Spain’s medical establishment for his high-handedness and willingness to skirt ethical boundaries. Little does anyone know that at his palatial estate overseen by an unswervingly loyal chief of staff named Marilia (Marisa Paredes), Robert has imprisoned a young woman named Vera (Elena Anaya) in a hotel-room-like cell, forcing her to wear a creepy nude-colored bodysuit and using her as a guinea pig for his latest experiments in developing artificial skin for humans. A series of flashbacks reveals that Robert’s treatment of Vera is motivated by much more than advancing the cause of medical science.

The story is based on a 1995 French novel by Thierry Jonquet published under the title Tarantula in the English-speaking world. I haven’t read the book, though the available plot summaries suggest that Almodóvar has pared the story down considerably. He should have pared more, though — the subplot about Marilia being visited by her estranged son from Brazil (Roberto Álamo) doesn’t add much.

Almodóvar’s treatment of the material owes a small debt to The Silence of the Lambs and a great deal more to one of the most disturbing films ever made, Eyes Without a Face. Like Georges Franju’s 1960 French horror flick, Almodóvar’s movie is about a shut-in woman, an insane doctor, and an obedient retainer. Monstrous though their actions are, they’re driven by love and revenge, and the easy comprehensibility of their motivations is what makes their evil so hard to shake off.

The plot turns when Robert catches his mentally unstable teenage daughter (Blanca Suárez) being raped — or so Robert thinks — by a young man (Jan Cornet). After the girl’s suicide, Robert tracks down the man and inflicts a vengeance on him that’s more creative and nightmarish than anything in the Saw films. The filmmaker brings a raft of familiar concerns to the material, but he reconfigures them in ways that are surprising enough that even longtime Almodóvar watchers will be blindsided by the movie’s big plot twist.

Banderas slips easily into the Almodóvar pantheon of icy middle-aged male villains, but the real star turn comes from the 36-year-old Anaya, who has long been treated as eye candy in Hollywood movies (Van Helsing, In the Land of Women) and sex object in Spanish movies (Room in Rome, Sex and Lucía). Though she is naked here occasionally, she does get the chance to prove that she can act with her clothes on. She seizes the opportunity, evoking the iron resolve that allows her to finally break free of Robert and the vulnerability that surfaces when Vera travels back to where her story began. It’s Anaya’s performance that keeps the proceedings from turning into a sadistic intellectual exercise.

Even so, this is a cold piece of work that raises disturbing questions about gender and power, and it’s all done with a clinical skill that’s hard not to admire even as you’re struggling to recover your breath. The Skin I Live In will chill you well under your skin.

The Skin I Live In