I’m still trying to figure out how the disjointed and heavy-handed Happy Feet got such great reviews five years ago, but there’s no secret as to why it was such a big box-office hit: Six-year-old kids can’t resist the sight of cute animated penguins singing and dancing to Justin Timberlake songs. So now we’ve got Happy Feet Two, and it’s even messier and weirder than the original. Which won’t stop a new batch of little kids from flocking to it and dragging their parents along while their older siblings are off watching the new Twilight movie. Just let this review stand as a warning. 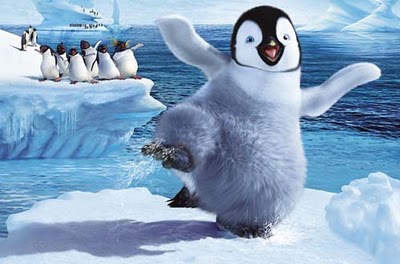 The story picks up with emperor penguins Mumble (voiced by Elijah Wood) and Gloria (voiced by Alecia Moore, better known as the pop singer Pink), now the parents of a male penguin chick named Eric (voiced by Ava Acres). They’re proud of him even though the kid gets laughed at because he can’t dance. Eric only gets a chance to redeem himself after he, his dad, and two of Eric’s friends are separated from the colony by shifting ice shelves that leave the colony stranded without food. It’s up to the four birds to save everyone.

The best thing here is a comic-relief subplot that has very little to do with the main story. It concerns a couple of krill named Will and Bill (voiced by Brad Pitt and Matt Damon) who strike out on their own because Will wants a life beyond the school and dreams of becoming a predator instead of prey. (Seeing a whale sucking down thousands of his kind, he tells Bill, “You see? That’s all we are! Lunch!”) The characters are funny, the voice actors bring some welcome energy, and we get to hear Pitt repeat his “Adapt or die!” line from Moneyball.

The rest of this is an unholy mess. Eric and Mumble do find their way into a colony of Adelies who worship a puffin (voiced by Hank Azaria with a Scandinavian accent) because they believe he’s a penguin who can fly. This promising idea doesn’t come to much. The musical interludes provide little: One tense moment is resolved when Eric sings a tribute to his dad to the tune of “E lucevan le stelle” from Tosca, and the joke wears off well before the aria ends. “Bridge of Light” is meant to be a consoling song sung by the trapped Gloria to her son, but Pink (taking over the role from the late Brittany Murphy) has neither the voice nor the attitude for a soothing number. This is yet another 3D movie where the element doesn’t add enough to the animation to be worth the surcharge. In fact, you’re better off saving your money for the family films coming out five days after this one.