Here’s a funny story about my trip to Bar Louie a couple weeks ago, when the Fort Worth location of the national chain kicked off its first week by giving out free drinks and appetizers. I think it was a Wednesday, and I’d already been to nearby Magnolia Motor Lounge, debating whether three beers and a shot were enough to call it a night. I tossed the mental pro/con list in favor of trusting my gut, and my gut told me it could handle a couple more shots of Goldschlager. I paid my tab and ambled up the street to the new joint, which currently fills the echoing former home of the much-loathed Delaney’s Irish Pub. 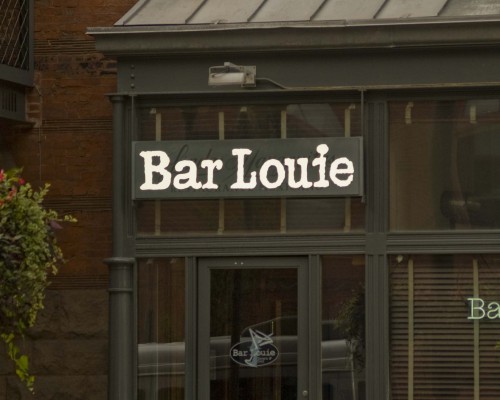 I’d never been in a Bar Louie, but its web site made me leery — according to its homepage, Bar Louie won the award for the “Concept of Tomorrow” by Restaurant Hospitality Magazine, and that sort of marketing-speak always raises my hackles. If you ask me, the concepts of tomorrow are ideas like free energy and giant robots who turn into dinosaurs, but if a two-story bar specializing in “oversize [sic] sandwiches” and “artfully concocted signature cocktails” is the future, then I guess I’ll call up Dr. Zaius and see if he’s down for a beer. There also was the Weekly ad that said Bar Louie would give you a free martini, which also sounded pretty sweet.

I don’t drink martinis, though, and I didn’t order anything else; when I walked in, the place was kind of slammed –– the giant bar in the middle was pretty much full of the young and professional getting served by the younger and casual. In other words, the joint was full of yuppies, and staffers wear t-shirts.

Do people even say “yuppies” anymore? I don’t really know, but if you’ve run around the south side of West 7th and complained about the type of crowds there, well, Bar Louie is probably the most West 7th of West 7th bars. Personally, I don’t think that’s a bad thing; people who wear suits because they have jobs that pay good money have to drink somewhere, and if a “concept” that markets things like “neighborhoods” and “family fun” attracts these folks, more power to ’em. And also, at least the concept isn’t “Fake Irish Pub with Horrible Service Mandated by Owners Who Might Be from Bizarro World on Account of Their Astounding Lack of Managerial Acumen.”

Anyway, drinking alongside the yuppies were a bunch of non-yuppies, some of whom I’ve seen all over town drinking at all manner of watering holes; given Bar Louie’s popularity, it obviously has somewhat universal appeal. Sure, I missed the warmth and intimacy of the small, locally owned dives I prefer, but it’s not like I’ve never been shit-housed at a big-box bar like Fox & Hound, Flying Saucer, or a Wal-Mart parking lot.

You get into Bar Louie through a glass entryway, hanging a right to empty into the main room. After I’d perused the décor, which is probably best described as “handsome wood,” I checked upstairs, which was closed. Not like boarded up, just locked and ready for a weekend night. This upstairs bar looked nice, new and pristine, like a diorama made for a class project by an overly fussy parent. It probably had room for about 70 people, served from another solid-looking wood bar. I walked back downstairs.

The main bar was still crowded, so I figured I’d call it a night without another drink, making my way through the crowd of suits in the direction of the suits on the other side of the glass box. My hands instinctively went for what I thought was the door’s crash-bar, and my face continued right into the glass. Because the door’s actually to the left, idiot, I thought, eyeing the greasy, face-shaped smudge and muted guffaws of the dudes laughing at me from outside. The server standing in front of the actual door was also laughing.

“Am I the first person to do that?” I asked.

“Cool. My name is Steve Steward,” I said. “In case you win a free drink for that kind of thing.” –– Steve Steward