When the defendant was walked into the Johnson County Courthouse in 2009 to stand trial on multiple charges of sexual assault on a child, he moved stiffly. When he stood to walk to the witness stand, it looked like he might have had a board strapped to his back beneath his loose shirt. When he gesticulated at all it was slowly, deliberately. Onlookers might have guessed he was recovering from a back injury. To a juror, the stiffness might have signified that he was anxious, hesitant, too deliberate.

His behavior might or might not have contributed to the jury finding him guilty on all counts. But his friends said he certainly didn’t move naturally that day. 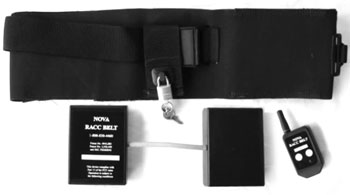 His stiffness was due at least in part to a broad belt strapped around his waist — like something a weight-lifter would wear, but thicker. The device was a stun belt — an electronic persuader meant to keep him from even considering lunging for a bailiff’s gun or making a run for the courthouse door.

Such devices are being used more and more often in courtrooms, and while proponents say they are excellent for keeping defendants from acting out, others view them as something that might cause defendants to appear anxious or otherwise signal “guilty” to a juror.

“We don’t use them often — a few times a year, based on the charges and the specific inmate,” said Johnson County Sheriff Bob Alford.

In this case, the defendant, already serving time for a marijuana conviction, was facing a sentence that could add up to hundreds of years in prison. Law enforcement officials figured that just might make him a flight risk. (He ended up being sentenced to more than 600 years when the judge “stacked” the punishments on multiple charges, to run consecutively.)

Alford said his department intends to use the belt on an inmate in an upcoming capital murder trial. “We use it as a deterrent,” he said. “Once we put it on, we don’t think we’ll have to use it, and we have not had to use it” — that is, actually trigger an electric charge to shock and stop the wearer. “It’s just there to prevent someone getting hurt in the courtroom, having a gun taken away, that sort of thing,” he said.

Alford was surprised to hear that some onlookers described the man as having moved stiffly while wearing the belt. He expressed doubt that it would have that effect. “It’s a lot better than chains in terms of making people look guilty when they’re on trial,” he said.

The Texas Defender Service, an organization devoted to improving the state’s criminal justice system, takes a different stand. While the group has not identified the devices as a major problem yet, members are keeping tabs, as electronic prisoner control grows more popular with sheriff’s departments.

“Generally, the actions taken by law enforcement to control a defendant are not to be obvious to a jury because the presumption of innocence can be very delicate,” said Kathryn M. Kase, interim executive director of the TDS. “So if you’re talking about someone wearing a stun belt that’s not obvious to the jurors, that’s one level of inquiry. But then you’ve got to take into account how wearing that stun belt will affect the defendant’s appearance in a courtroom, because jurors are generally looking very closely at the accused for signs of guilt or innocence.”

One of the leading makers of the stun belts — and the outfit that Johnson County uses — is NOVA USA, which has been making “less lethal” control devices for law enforcement and the military for 25 years. Jim Kroncke, director of marketing for NOVA, said there’s been an upswing in the last few years in courtroom use of their belts, which deliver a 50,000-watt shock from a remote control device. “Just about every state has at least one sheriff’s department that has them. Some states have a great deal more than that,” he said.

Kroncke, a former police officer who spent 10 years on his department’s SWAT team, guessed that sheriff’s departments in dozens of Texas counties use them. “These are a great psychological deterrent to courtroom misbehavior,” he said.

“Anecdotally they’re rarely deployed, but just having them on a defendant has stopped a lot of court disturbances and escape attempts over the years,” he said, adding, “There are no statistics on that, of course.”

Kroncke says that if a defendant sees the belt discharged “and hears it crackling” before it’s strapped on, “it suggests what will happen to you if you’re wearing it, and that [it] will be very unpleasant.”

The belt delivers the same voltage as a Taser weapon, but from several different points at once, for as long as the wireless remote is on. Kroncke said that he has been shocked with them 12 times in the last 15 or so years, and that they simply drop you in your tracks.

In Johnson County, Alford said the devices are used only a handful of times per year. Tarrant County uses strap-on stun devices more regularly, but recently changed from using the vests to a less obtrusive ankle device.

“It’s not like we’re going to strap someone who has been out on bail and comes to court on the day they’re supposed to,” said Tarrant County Sheriff’s Department spokesman Terry Grisham. “And then we don’t deploy them for most inmates, but we do use those devices pretty regularly on people who have made threatening comments or acted violently in jail while awaiting their trial.”

Grisham said the belts are never used without the permission of the trial judge and that some judges have even asked for defendants to be outfitted with stun devices when they think the prisoners might be difficult to control. In the five or so years the devices have been used, no defendant has ever been jolted.

“We get compliance through education,” Grisham said. “We tell the defendant what sort of behavior will cause us to use it and once they understand … well, so far no defendant has violated those rules in the courtroom.”

The Texas Defender Service wasn’t the first to raise the question of whether stun belts might improperly influence the outcome of a trial.

“In New York in 2009, the Court of Appeals reversed a murder conviction because the defendant had been required to wear a stun belt without any individualized finding that it was necessary in his case,” said David Fathi, director of ACLU’s National Prison Project. He said some states are stricter on the use of stun devices than others.

“There are several problems with these devices,” said Fathi. “The first would be if the jury became aware of the defendant wearing a stun belt or any other stun device, it could make the jury think the person is violent, which would prejudice the jury. It can also cause physical discomfort” — even without the electrical charge being set off — “which would affect the defendant’s behavior, also potentially prejudicing the jury’s perception of the defendant.”

Fathi said the devices sometimes go off accidentally as well, and that just being aware of that possibility can cause a defendant to be nervous. “If a defendant looks anxious, the jury is likely to see that as a sign of potential guilt or perjury,” he said.

He said he didn’t know of any cases where the stun belts have been used abusively, but he does think they are often used unnecessarily.

“In most cases, adequate courtroom security can control the defendant’s behavior,” he said. “If they’re necessary at all, it should only be in cases where a judge has made an individual finding that they’re necessary.”

Pia Rodriguez, a former Tarrant County prosecutor who is now a criminal defense attorney in Arlington, said she has had only one case in which a defendant had to wear a stun belt, and she didn’t think it restricted his movements. “This was a case of someone with a history of threats and violence and clearly one where using a stun device was warranted to keep anything from happening in the courtroom,” she said.

Rick Wardroup, the capital punishment case attorney for the Texas Criminal Defense Lawyers Association, works out of Lubbock, which doesn’t use stun devices. He said he would prefer that his clients not be required to wear them because of the possibility that jurors might be influenced. “And if we ever do get them here, at the first sign that they are interfering with my client in any way, I would bring it up to the judge immediately,” he said.

In Tarrant County, said Grisham, “someone has to ‘earn’ the right to wear a shock device in a courtroom. And certainly a percentage of our defendants do.”

“Things like stun devices worn by defendants go straight to the heart of a fair trial,” said Kase, suggesting that security concerns could be handled differently. “Look, you can put a knee brace on someone that makes it impossible to run because their knee won’t bend, for instance. We need to be cautious of anything that might affect a defendant’s right to a fair trial.”

And just because this new technology is gathering steam, Kase doesn’t think that necessarily means it’s a better way to control the courtroom. “We controlled defendant behavior long before anybody sold a stun belt to the local sheriff’s department,” she said.