The term is likely to come up if you ask Slumberbuzz’ five members to describe their sound.

But the Fort Worth quintet’s repertoire also encompasses psychedelic rock, from ’60s-style Velvet Underground jams to more contemporary rumblings in the spirit of The Brian Jonestown Massacre. In Slumberbuzz’ music, there are no solos per se, and each of the five instruments carries a piece of the band’s signature element: textured melody. 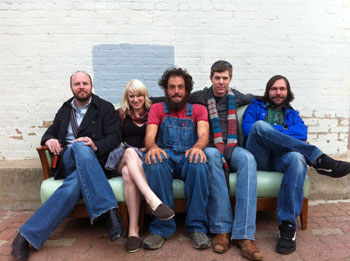 He started the band under the moniker The Side Effects about two years ago with fellow thirtysomething guitarist Aaron Davis. Bassist John Pickle joined them in mid-2010, around the same time as drummer Sean Toth. In January, Toth invited his girlfriend, Katy Webb, to serve as Slumberbuzz’ keyboardist.

Toth and Webb had met and grown close through their other project, Webbed, a much poppier outfit that includes Webb’s younger brother. Webbed played up to 50 shows a year, but the band has yet to make any earnest effort to cut an album. Today Webbed is on hiatus, Toth said, while the two focus on Slumberbuzz.

Shortly after Webb joined The Side Effects, the band decided to ditch the name –– too many other groups had it. Alford suggested Slumberbuzz, and the group agreed that it jibed nicely with their sound. “We’ve got the sleepiness and the heaviness, too,” Alford explained.

Philosophically, Slumberbuzz adheres to its members’ convictions about musical purity and collaboration. For every skill they strive for, the members can name another quality they want to avoid — such as flashiness, musical tantrums, and clichés.

The result is heavy psychedelia couched in abstract themes and vague lyrics tailored specifically to avoid another of the band’s pet peeves: self-absorbed, angst-ridden drivel.

Alford, the group’s primary songwriter, said he likes to flirt with the morose but stay this side of maudlin.

He acknowledged that this litany of scruples might smack of arrogance. But, he noted, such is the price of integrity. Many concertgoers who’ve heard and understand Slumberbuzz would also understand that the music is not for everyone, Alford said. “The people who like us love the fuck out of us,” he said. “But the people who don’t get it? Well, maybe they shouldn’t get it. Music is art, and there should be a certain snobbiness that goes along with art. It’s not for everyone.”

Davis added, “We’re just trying to make music that we like to listen to. If other people like it, then that’s good. What are you supposed to do? You can’t please all the people all of the time. You’ve got to do what you like.”

The quintet also frowns on digitization. All proclaim their loyalty to analog instruments, equipment, and recordings. Slumberbuzz’ upcoming, tentatively self-titled debut album will contain 11 songs, all recorded in a two-day blur at a local studio. The record is 100-percent analog. “When recording analog,” Pickle said, “every instrument just has more life to it.”

Slumberbuzz hopes to release the album in a couple of months.