More than 20 years after she left office as Prime Minister of Great Britain, Margaret Thatcher now enjoys a much higher reputation in America than in the country over which she ruled. This is curious, though not so surprising. After all, the American public didn’t have to live with her harsh economic austerity measures or her social policies that frequently targeted minorities and the poor. All that the people on this side of the Atlantic saw of her was a forceful female head of government and a great partner for Ronald Reagan in the global struggle against communism. This would seem to bode well for a movie that celebrates her glittering career. 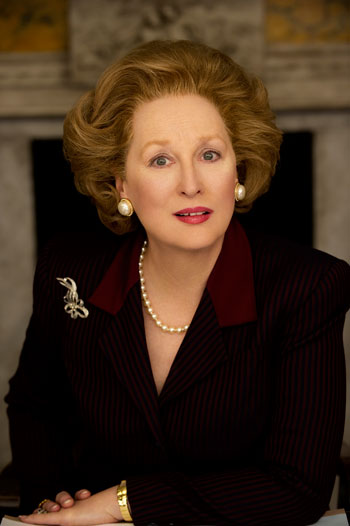 Except that The Iron Lady isn’t that film. It tries to do something different. Rather than chronicle her rise to power and her hardships and successes in office, the movie mostly takes place some time during the last decade or so, as Baroness Thatcher lives in exile, struggling with senile dementia while reminders of her past successes float in and out of her consciousness. That’s a bold thing for a political biography to try. It just doesn’t work well.

Meryl Streep portrays the aged former prime minister, who’s attended to by assistants, her daughter Carol (Olivia Colman), and the spirit of her deceased husband Denis (Jim Broadbent), whose presence comforts her but also torments her, because she knows that seeing him means that her mind is going. Flashback sequences deal fleetingly with her childhood, early political career, election as prime minister in 1979, initial unpopularity amid massive domestic spending cuts, war in the Falklands and resulting surge in popularity, and eventual loss of office to a mutiny within her own party.

Phyllida Lloyd previously directed Streep in the excruciating Mamma Mia!, and the director’s second film is just as messy. The film maunders and meanders, and while there’s a certain logic to the screenplay’s structure mirroring the main character’s mental disorder, the story never reaches any sort of point. Lloyd and screenwriter Abi Morgan (who also co-wrote Shame, a film that would make many Tories blanch) deliberately avoid any discussion of Thatcher’s politics, so we never learn how she rose through the ranks of the Conservative Party, let alone the thinking behind her strongest-held principles and her more controversial decisions as prime minister. This seems perverse; surely these are exactly why we’d be interested in a film about Margaret Thatcher in the first place. Why make a film about such a polarizing subject if you’re only going to skirt the things that made her polarizing to begin with? More to the point, why should we care about this old woman’s loss of her mental faculties when the movie has given us only the faintest idea about who she is? Better films have been made about politicians in exile (Paolo Sorrentino’s Il Divo) and about old age and dementia (Lee Chang-dong’s Poetry, Sarah Polley’s Away From Her). This movie is too vaporous and undisciplined to make it into their class.

Others have already said all this about The Iron Lady. Here’s what they haven’t said: Meryl Streep’s not that good, mostly because she’s not allowed to be. Oh, she does a hell of a Thatcher impression, both in her dotage and in her vigorous prime, imitating the prime minister’s authoritative way of speaking, with her voice going from high pitch to low at the end of sentences. Then again, we already knew Streep could do this sort of work. As much fun as it is to see her Thatcher smack down ineffectual male Labourites, fellow Conservatives, and U.S. Secretary of State Alexander Haig (Matthew Marsh), those scenes are presented to us with no context. That’s unfortunately typical of how this biography goes about its business. Streep can’t fill in the yawning gaps in her character as written, and so she doesn’t even reach the level of her work in Julie & Julia, let alone her best performances from this past decade, which all allowed her to create fully rounded characters. It may not be her fault, but her turn here belongs on Saturday Night Live, not in a serious political drama.

Streep deserves better from this vehicle. So does Margaret Thatcher, and you can easily imagine her wanting to rap the filmmakers on the knuckles and tell them to get on with the story instead of wandering around in the least interesting part of her life. If only Lloyd and Morgan had taken their cue from her.