I’m not sure why this film is called Haywire. The title implies a berserk quality, when in fact this movie is a tightly controlled and emotionally subdued piece of work. This is the closest thing to a pure action-thriller that Steven Soderbergh has ever done in his fascinatingly varied career, and it’ll surprise no one that he turns out to be pretty good at it. 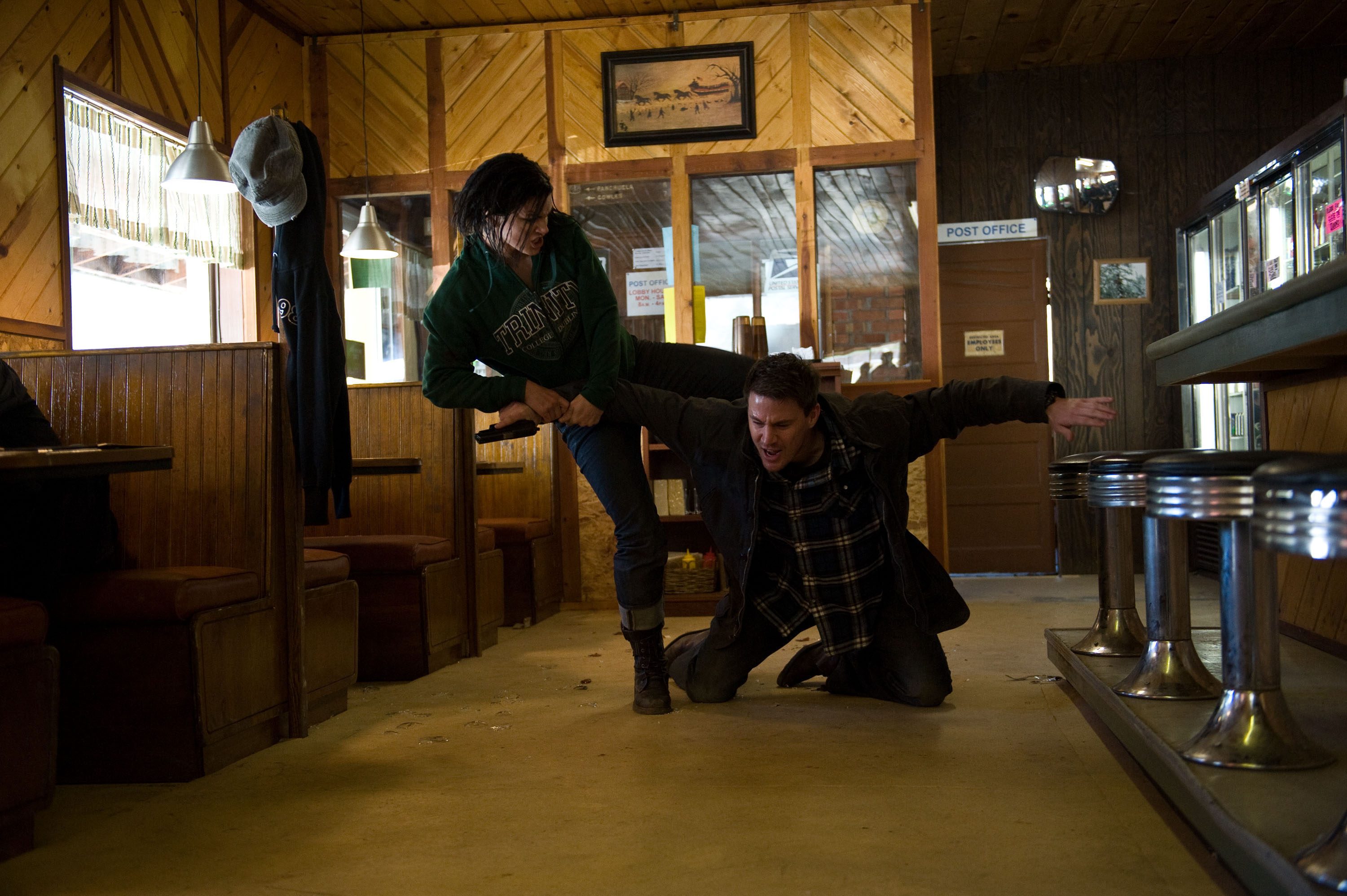 The movie begins in the middle of the story, with one Mallory Kane (Gina Carano) beating the crap out of an ex-colleague named Aaron (Channing Tatum) in a diner in upstate New York. As she commandeers a car with a petrified fellow customer (Michael Angarano) in the passenger seat, she tells him in flashbacks about how she was an operative for a private security firm that contracted to the CIA until a job in Dublin went bad after the agent posing as her husband (Michael Fassbender) tried to kill her. A whole string of male superiors has sold her out for reasons that aren’t immediately clear, and she’s trying to get back at them despite a massive amount of manpower and firepower deployed for the purpose of making her dead.

The conspiracy turns out to be breathtakingly incompetent, and one of her targets who’s hiding from her decides to ditch his bodyguard for a solitary walk on a beach. (Very inadvisable, that.) Still, what really keeps this movie from greatness is Mallory herself. Screenwriter Lem Dobbs, who collaborated with Soderbergh on his 1999 masterpiece The Limey, writes the character as all snarling attitude on a stick. The complications of Lisbeth Salander are nowhere to be found here, and when Mallory takes Aaron to bed earlier in the story, we have no clue as to why, other than that he looks like Channing Tatum. A much-decorated MMA fighter (and the daughter of a former Dallas Cowboys backup quarterback), Carano is a flat — albeit very pretty — screen presence who lacks even the most basic acting skills, a shortcoming only highlighted by the heavyweight actors surrounding her, including Ewan McGregor, Antonio Banderas, Michael Douglas, and Bill Paxton.

Fortunately, she turns dynamic in the numerous action sequences. You’d expect her to shine in the fight scenes (expertly choreographed by J.J. Perry), and so she does in a knock-down, drag-out brawl with Fassbender in a deluxe hotel suite and an encounter with a Spanish heavy in a narrow hallway, where she launches herself off a wall to deliver a spinning kick. Yet her athleticism comes in just as handy in an extended chase scene when Mallory leaps across rooftops and barrels down staircases to elude Irish police. Her physical virtuosity is matched by her director, who effectively places us in Mallory’s situation during the preceding scene, as she walks out of her hotel and notes the car starting behind her, the pedestrians passing her by, and finally the guy across the street who’s trying to look like he’s not watching her. Soderbergh’s action sequences are mapped out in extensive detail, but they never lose their fluidity or their sense of spontaneity. Haywire isn’t great art, but it’s a pleasingly tossed-off piece of work that provides 93 minutes’ worth of quick-and-dirty thrills.