Last fall we saw the release of Steven Soderbergh’s Contagion, a terrific thriller that took in a single event (a global pandemic) from the points of view of a wide array of characters affected by it. The cuddlier and well-intentioned Big Miracle tries to do pretty much the same thing, only it has a great deal less talent behind it. While watching this environmental drama, I kept imagining the better version of it that Soderbergh or any number of other filmmakers would have made. 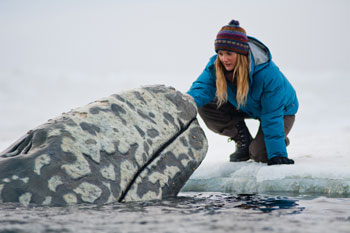 The film is based on Thomas Rose’s book Freeing the Whales, an account of the real-life 1988 events surrounding Operation Breakthrough, though most of the names are changed. It begins one late summer day in the northern Alaskan town of Barrow, when Anchorage-based TV reporter Adam Carlson (John Krasinski) discovers that an early freeze has trapped three California grey whales under ice off the coast, seemingly doomed to drown without access to open water. His reporting of the story draws a huge crowd of rescuers and media types to Barrow, one of the first of whom is Rachel (Drew Barrymore), Adam’s ex-girlfriend and a Greenpeace activist who’s willing to shift the ice caps herself for the whales. As more and more people try to break the ice to save the unfortunate cetaceans, we follow their perspectives: an oil baron (Ted Danson) looking to rehabilitate his crappy environmental record, an L.A. reporter (Kristen Bell) yearning to have her male colleagues take her seriously, two Minnesota brothers (Rob Riggle and James LeGros) spotting a chance to promote their newly invented de-icing machine, a National Guard colonel (Dermot Mulroney) eyeing the logistical challenges of operating in freezing temperatures, a White House staffer (Vinessa Shaw) trying to protect the outgoing President Reagan’s image, a Soviet icebreaking ship’s captain (Mark Ivanir) whose vessel is called in for help, and still others besides.

The ambition and scope of Jack Amiel and Michael Begler’s script are admirable, but the material needs a director willing to get down to brass tacks and immerse us in the details of life in this remote place and the motley crew of outsiders who suddenly invade it. A more intellectually curious filmmaker might have spun some lessons for us about the workings of mass media by looking at how they handled a story like this in a pre-internet age. Or, that filmmaker could have situated this story within the history of the environmental movement and explained how the incident shifted human attitudes toward whales.

Instead, director Ken Kwapis treats this as a sitcom episode written large, in keeping with his background in middlebrow comedies (He’s Just Not That Into You, The Sisterhood of the Traveling Pants). He’d rather score a few cheap laughs, flesh out two perfunctory romantic plots, and make a few woolly statements about the majesty of whales and their ability to bring people together. There’s a faint stirring of interest when Rachel trains her ire on the local Eskimo tribe for wanting to kill the whales, seemingly oblivious to the fact that the natives rely on whaling to survive. That culture clash gives a glimpse of the more rigorous film that might have been.

The director’s miscasting has a knock-on effect on the actors. The cast as a whole is too lightweight to impart any gravity of their own to the story. Barrymore comes off particularly badly — she’s exactly the wrong actress to be playing an angry, driven, less-than-charismatic crusader who’s frequently tone-deaf to other people’s concerns. Rachel’s monologue about why we care about the whales catches both Barrymore and the film at their weepy worst, and even if you love whales (maybe especially if you love whales), you’ll be annoyed by the tearjerking that hasn’t come close to being earned. Neither as informative nor as entertaining as a trip to the local aquarium, Big Miracle ends up feeling very small indeed, despite its lofty goals.