It’s hard to overestimate the influence of 19th-century Norwegian playwright Henrik Ibsen on theater and, in particular, the modern English-speaking stage. With plays like A Doll’s House, Hedda Gabler, An Enemy of the People, and Ghosts, Ibsen was one of the first to point a moral (but not moralizing) eye toward social issues like the effects of poverty and the inferior status of women. But his pet theme, illustrated in scenes full of naturalistic but explosive dialogue, was arguably the foundation of all modern drama: the plight of the individual who struggles with the expectations placed upon him or her by society. George Bernard Shaw and Eugene O’Neill, to name just two, worshipped him.

Few people realize, though, that Ibsen turned his back on realism and social critique with his final, rarely seen play When We Dead Awaken (1899). The script is poetic, brooding, and full of symbolism that can seem odd or, frankly, ridiculous to contemporary audiences. The Fort Worth company Pantagleize Theatre specializes in obscure but influential European works, so it’s natural that they’d want to give this difficult play a shot. 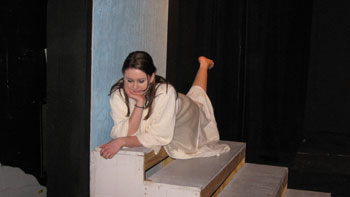 “This show is very expressionistic and surreal in comparison to his other plays,” said Kami Rogers, the show’s director. “It’s also a little autobiographical, in the sense that Ibsen was expressing a general restlessness with his life as an artist. There are a lot of moments that remind you of pieces in his other works. He seemed to be working through some personal stuff.”

When We Dead Awaken is obsessed with, among other things, the idea that the creative process is an exploitative and soul-killing dynamic. (Ibsen was a master playwright, but nobody ever said he was a fun guy to be around.) The play follows a sculptor named Rubek (David Crouch) who’s vacationing with his wife Maia (Rene Sarradet) at a mountainside resort when he sees a mysterious woman who seems familiar to him. It turns out she is Irene (Holly Kiehn), his former lover and the model/muse for the piece of sculpture that earned Rubek his reputation as a genius many years ago. Irene insists that she died as an individual when that artwork was completed, and she and Rubek resume a destructive relationship with tragic consequences. There is also a bear hunter named Ulfheim (Aaron Vaughan) who courts Maia and a black-clothed Sister of Mercy (Amanda Henderson) who tries to help Irene maintain her fragile sanity. However avant garde When We Dead Awaken may have seemed to audiences in 1899 (or today, for that matter), Rogers said the material was based in part on a real couple.

“The main characters seem to be based on [the sculptor] Auguste Rodin and [his protégée] Camille Claudel,” she said. “Claudel was his student and very talented in her own right. Some people said she was better than Rodin. After they split up, she destroyed much of her own work and was diagnosed with [what’s now called] paranoid schizophrenia.”

When We Dead Awaken was full of artistic and technical challenges for the Pantagleize director and her cast. For one thing, the dialogue is not naturalistic –– the conversations aren’t composed of logically flowing sentences, and the phrasing in the English translation the company used sometimes sounded odd to the ears of the twenty- and thirtysomething performers. (“Some of the lines are grandiose and poetic, and it’s easy to slip into melodrama,” Rogers said with a chuckle. “One of the actors had to deal with a line that read, ‘I tingled with shame.’ They were, like, ‘I have to say “tingle” [onstage]?’ ”

And then they had to figure out how to stage a climactic avalanche on a mountainside. (If you want to know how they did it, you’ll just have to go see the show.) In the end, Rogers believes that while Ibsen’s final work might not be one of his unqualified masterpieces, it is more than strange and compelling enough to provide a unique theatergoing opportunity for audiences who might be familiar with only the writer’s most famous plays.

“What’s great about Pantagleize is that they do these rarely produced international works,” Rogers said. “This is an opportunity to explore a part of Ibsen that you’re not normally going to have a chance to see. If you’re a fan of A Doll’s House or Hedda Gabler or Peer Gynt, this show is sort of an open diary into Ibsen’s work. You see reflections of past characters. It’s haunting and it’s different.”

When We Dead Awaken