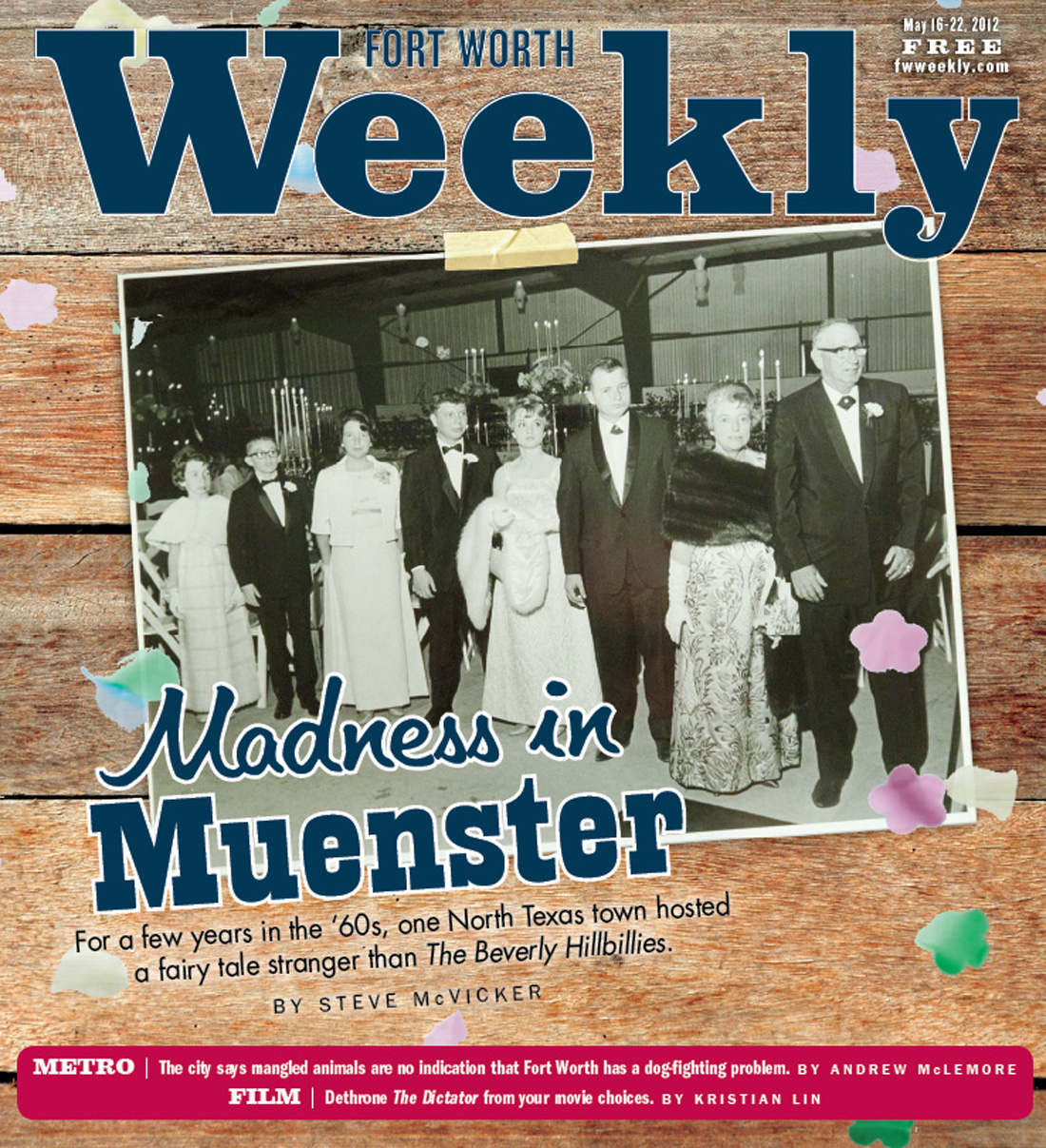 Margaret Medders’ final departure from the tiny North Texas town of Muenster on an unseasonably warm day last January was a far cry from her ostentatious arrival 50 years earlier.

As the wind blew through the cemetery just east of Sacred Heart Catholic Church, about two dozen mourners –– a handful of relatives estranged and otherwise, a few long-suffering friends, and the simply curious –– watched as Margaret was laid to rest in the ground made soggy by rain the day before, alongside two of her three husbands and two of her eight children.

Five decades earlier, the crowds had been just as curious but exponentially larger, when the Medderses brought their six-year circus and soap opera to this small, conservative, heavily German Catholic burg. Their run ended with lawsuits, jail terms, and recriminations, but it started with Cadillacs, champagne, and diamonds. Along the way, a whole lot of farmers, ranchers, and merchants in the flat, near-treeless Red River Valley got fitted for tuxedos, introduced to the civil rights movement, and taken to the cleaners. A president, a governor, and famous entertainers came to visit. And all of it flowed from the head-spinning arrival of Margaret and her second husband, Ernest Medders, that strange Tennessee couple with all those kids –– and all that money. Especially the money.

Ernest, 52, was a dark, slender, 6-foot-plus man who looked like a cross between Johnny Cash and comic cowboy actor Slim Pickens, in horn-rimmed glasses. Ernest was a slow talker, a third-grade dropout who could neither read nor write and apparently suffered from dyslexia, an affliction that few had even heard of in the 1960s. Back in Tennessee he’d been a mechanic’s assistant. When he moved to Texas, he developed a taste for alligator boots, Western-style suits, and cowboy hats with the side brims pointed almost straight up in a sort of rodeo clown fashion.

His wife was eight years younger and clearly the brains of the outfit. At 5’ 2” and 125 pounds, Margaret was matronly and plain. She could go from kind, motherly, and gracious one minute to cold, insulting, and demanding the next, the mood swings fueled by what family members say was manic depression.

Mostly what Margaret was, though, was in charge — and woe unto those who underestimated her. She knew what she wanted and wasn’t shy in going about getting it. What Margaret wanted was simply the best of everything. If she had little idea at first what actually constituted “the best,” she knew enough to pay good money to those who did.

The Medderses’ combination of unsophisticated backgrounds and apparently unlimited funds drew comparisons to the 1960s television sitcom The Beverly Hillbillies. “These people had nothing on the Clampetts,” said one long-time Muenster resident who did business with the family and went to their parties. The couple built a house that was a veritable mansion by Muenster standards, complete with a cement pond, and flew in fancy stuff from Neiman Marcus in Dallas for their parties and Margaret’s wardrobe.

Rumor around town was that their wealth was based on oil. But in the fictional Clampett story, the oil was real. As it turned out, with the real Medders family, it was the oil that was fictional. The only gusher they had tapped into was OPM –– $3 million of other people’s money. Stranger still, most of the money came from an order of nuns in Indiana.

The Medderses began their run of conspicuous consumption in 1961 –– a lifestyle, as documented later by the Associated Press, both foreign and off-putting to many of their new neighbors.

They began by buying a piece of property on the edge of town and hiring a local contractor to build a two-story colonial-style 8,000-square-foot residence with seven bedrooms and seven full bathrooms, one of them outfitted with a bidet –– something most folks in Muenster at the time wouldn’t have known whether to use for spitting, drinking, or, well, whatever. They filled the house with new furniture and had wide, colorful beds of chrysanthemums and other flowers planted along the circular driveway.

During their first few weeks in town, the Medderses leased several vehicles, including a maroon Cadillac Coupe de Ville for Margaret, with personalized license plates that read “Mrs MM.”

And while Ernest may have looked goofy in his dude ranch duds, no one could say he was all hat, no cattle. The Medderses became overnight ranchers. Shortly after the house was finished, they began buying championship-quality livestock. With the help of Margaret’s son Eugene Riggs, they developed successful breeding programs for Appaloosa horses and Angus cattle.

The huge main barn, also constructed from scratch and at considerable expense, doubled as a party and banquet hall, equipped with air-conditioning, a kitchen, an office, a removable wooden dance floor, and a crystal chandelier. The structure could seat up to 1,000 guests for the couple’s frequent, lavish celebrations.