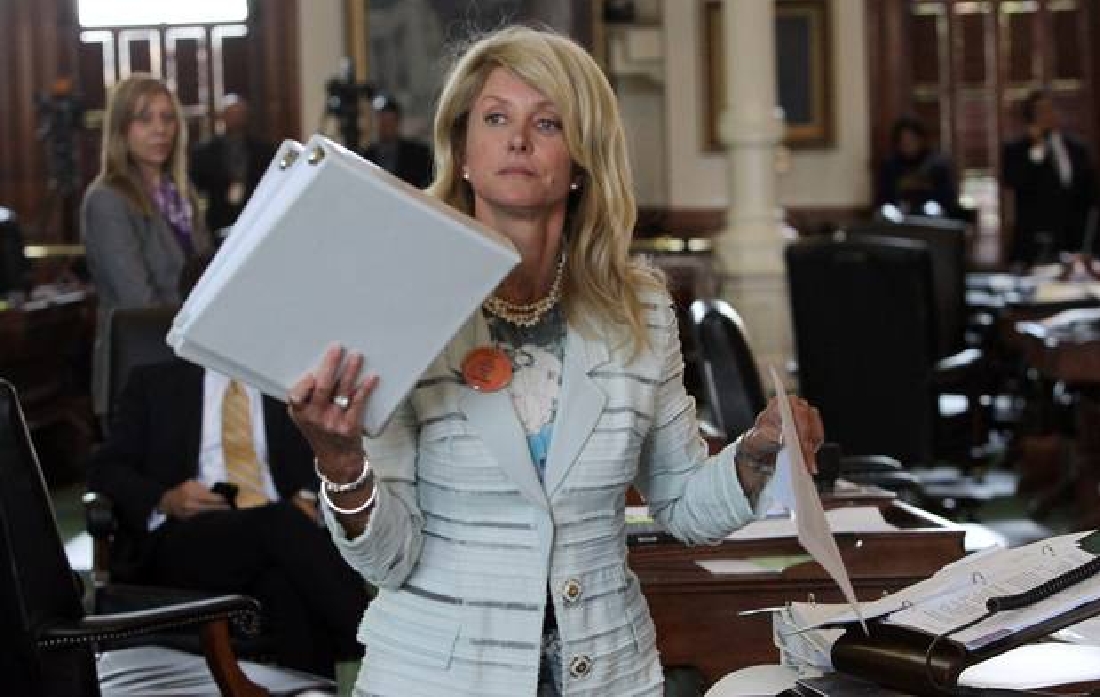 North Texas freelancer Annabelle Massey Malloy sent us this commentary on the filibuster:

Like hundreds of thousands of other women and political junkies across this country, I was glued to the Texas Tribune’s live feed from the Texas Senate chamber last night, alternately checking on Rachel Maddow’s coverage on msnbc and CNN reports. The Texas Tribune reported that by midnight on Tuesday, roughly 200,000 people were watching its Youtube feed. President Obama tweeted, “Something special is happening in Austin tonight,” and posted the increasingly popular hashtag–#StandWithWendy.

Fort Worth Political strategist J. D. Angle and Davis were pictured on the Facebook page of Fort Worth City Councilman Joel Burns at the end of Davis’s filibuster. “Her back hurt,” a close friend of the senator, told me, and the photo shows Davis slightly slumped in an office chair, talking on the phone. Angle and Burns are married.

A Youtube video, posted after Dewhurst’s announcement that the bill was dead, shows the rotunda packed with orange-shirted women and men singing, “The Eyes of Texas.”

The bill would have reduced the period of legal abortion in Texas from the fisrt 24 weeks to the first 20 weeks of pregnancy. the bill also would have profoundly affected women’s healthcare clinics—including Planned Parenthood—by requiring hospital-like equipment and staffing standards for facilities around the state. Most Planned Parenthood offices and other women’s clinics are more like physicians’ offices than acute-care facilities. In rural communities and small cities including most of West Texas, women’s clinics began to plan for shutting their doors, because the proposed requirements were budget-busters.

Republican senators challenged Davis’ talking points about Planned Parenthood’s budget on the grounds that they were not germane—a requirement—and also squawked when fellow senator Rodney Ellis, D-Houston, tried to help Davis put on a back brace. The draconian filibuster rules in Texas are much more strict than the federal government’s rules. In Texas, the senator was not allowed to lean on her desk or to sit; she was not allowed to leave the Senate chamber for a bathroom break or to eat. The complete rules are found at http://www.senate.state.tx.us/rules/SenateRules83.pdf.
Parliamentary procedure was an ongoing feature of last night’s event, as Senate Democrats tried to avert Davis’s alleged strikes—broken filibuster rules—and stall any vote on the bill before midnight. Around 11:45 pm, San Antonio Democratic Sen. Leticia Van de Putte, who had missed some of the session while attending her father’s funeral, objected as her requests to speak were ignored. Sheer frustration, the approaching midnight deadline, and Van de Putte’s troubles seemed to converge as the gallery of spectators, as well as the thousands of people just outside, began to scream, chanting “Wendy” and waving hands and fists, creating utter pandemonium and frustrating Republican senators’ attempts to hold a valid vote before the session expired.

Davis’ filibuster effort lasted 13 hours. In those hours and since, her perseverance has been compared to the grit and determination of former Texas Governor Ann Richards.

Just after Dewhurst announced that the vote had come too late—that computerized time stamps and a worldwide audience provided evidence that midnight had passed before the vote was completed — Davis made a brief statement.

“I am overwhelmed, honestly,” she told reporters gathered to cover the event. She noted the outpouring of support, including the thousands who showed up in person and the many more thousands who weighed in by social media, had “showed the determination and spirit of Texas women and people who care about Texas women.”

Most importantly, she said in a press release sent out shortly thereafter, she wanted to express her gratitude “to those who lent their voice in the over 12,000 personal stories that you bravely and selflessly shared with me to object to this dangerous legislation.

“It was your filibuster,” she said.