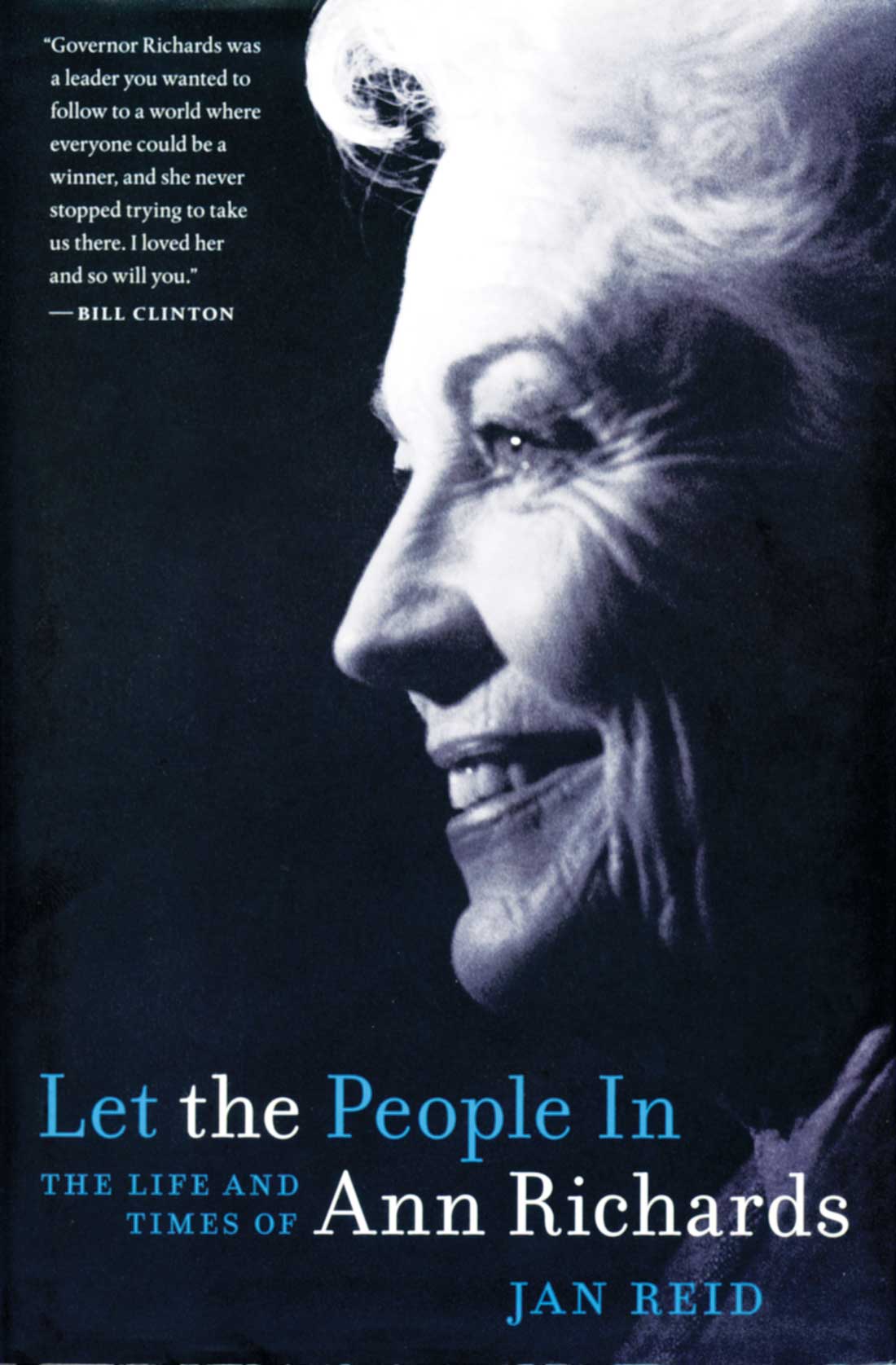 Before there was Wendy Davis, there was Ann Richards. With her political savvy, big smart mouth, and, yes, her trademark “closer to God” silver bouffant ’do, Richards is one of only two women ever elected governor of Texas (the first being Miriam “Ma” Ferguson in 1925).

With Let the People In: The Life and Times of Ann Richards, the new biography by Texas Monthly contributor Jan Reid, readers are brought back to the heady ’60s in Texas, where the lines between statehouse and street were often blurred. (You gotta love a politician’s biography with an index referencing Jerry Jeff Walker, Armadillo World Headquarters, and Dennis Hopper.)

Richards was a member of the Young Democrats organization, an attorney’s wife, and a mother of four when she realized that “she knew no one of another race or culture” and volunteered for Henry Gonzalez in his 1958 run for governor. He lost, but Richards’ course was set.

Some readers’ eyes may glaze over as the accounts of political maneuvering, outflanking, and downright backstabbing unfold. Although Reid, the author of books on Texas Music and two award-winning novels, employs spare and lucid prose, he had a byzantine topic to cover. But no one will overlook Richards’ blazing idealism, her fierce intelligence, and her determination to “let the people in.” (The title comes from a line in her inauguration speech that almost passed unheard due to the noise of a helicopter circling the capitol.)

Ann Richards didn’t set out to be a public figure. It seems as if she was content with campaigning and organizing for others, foremost among them Sarah Weddington (of Roe v. Wade fame). But Richards’ pals at Austin’s storied Sholz Garten convinced her to run for county commissioner. She won that election and went on to serve a second term.

Her troubles kept pace with her triumphs in the early 1980s. Richards’ alcoholism had escalated to the point that friends and family staged an intervention. She left for rehab, which she later called “drunk school,” that very day. And it took. Although she never drank again, questions about her sobriety and use of other drugs hounded her for the rest of her political life.

And the troubles weren’t limited to substance abuse. Her marriage fell apart, and the cast of characters in politics was far from what she would have desired. Ronald Reagan was president. The elder George Bush was vice president, and Karl Rove was advising him. Staid Republican Bill Clements was ensconced in the governor’s mansion.

Richards ran for state treasurer, won, and set out to restructure the outmoded office.

Around this time, author Reid’s wife Dorothy joined Richards’ staff, a close connection that served him well in writing this volume.

Richards was chosen keynote speaker for the 1988 Democratic National Convention. Her speech galvanized women and liberals around the nation, and from then on she was in demand.

She ran for governor in 1990 against Clayton Williams, a wealthy rancher from West Texas who did himself no favors by telling a rape joke, refusing to shake Richards’ hand, and promising to “head and hoof her and drag her through the dirt.”

Reid describes Richards’ sole term as Texas governor as “a nearly perfect parabola — two years up and two years down.” She did open up government, just as she had pledged to do. She appointed women, Hispanics, and African-Americans to major posts. She was a keen environmentalist, advocated for prison reform and for therapy for those incarcerated for drug and alcohol-related crimes, and supported filmmaking in Texas. She also made some major errors. She appointed one of her closest staffers to the Texas Railroad Commission and suffered the fallout when it turned out that the woman had lied about her academic credentials. Richards spoke impulsively and didn’t always serve her own best interests. The horrific inferno at Waco’s Mount Carmel compound occurred on her watch. She was no superhero and no saint.

Aside from Richards’ career, the book opens up a wide window into her personal life, and it makes a fascinating read for that alone. There are many notes reflecting her long love affair with Bud Shrake — the sportswriter, novelist, and screenwriter — and accounts of her not-always-chummy relationship with the equally outspoken Molly Ivins. Richards counted Lily Tomlin and Dolly Parton among her friends, and Hillary Clinton was her protegée.

The many photographs add a lot to the book. We see Willie Nelson in a t-shirt reading “Another Man for Ann,” quiet moments with the family (Richards’ daughter Cecile is national president of Planned Parenthood), and an ebullient Richards on a Harley-Davidson motorcycle.

Ann Richards died of cancer in 2006, Molly Ivins passed a few months later, and Bud Shrake died in 2009. He and Ann are buried side by side in the shade of an old live oak tree.

Her life was tumultuous and her ideals commendable. On her tombstone are inscribed the words, “Today we have a vision of a Texas where opportunity knows no race, no gender, no color — a glimpse of what can happen in government if we simply open the doors and let the people in.” Sounds good, doesn’t it?

Let the People In: The Life and Times of Ann Richards By Jan Reid