Critic’s choice: Endowment fund for the Arts Council of Fort Worth

Two years of budget battle losses have left local arts groups feeling increasingly hung out to dry by the Fort Worth City Council. Texas Ballet Theater, Fort Worth Opera, and dozens of other local arts organizations deserve more stable funding from the city — some dedicated pool that the council can’t divert to other purposes. A $20 million endowment, put together through public appeals, government grants, and donations from deep-pocketed arts patrons, could reasonably distribute up to a million dollars annually through the arts council. Considering that local arts organizations generate more than $100 million in economic activity each year, it seems a worthy investment.

WFAA investigative reporter Brett Shipp’s sturdy, unflinching investigations have served the public well over many years. Most recently, his reporting, along with that of colleague Byron Harris, has shone a bright light on the tangled mess surrounding embattled Dallas schools chief Mike Miles. “Tangled mess” and “public school officials”? Hmm, where have we heard that before?

Jamey Newberg is obsessed with the Texas Rangers. His online Report covers the organization better than anyone in the business. The Dallas attorney is a far cry from a daily beat reporter trying to fill column inches or a half-informed blowhard columnist. He’s a super-fan with one of the sharpest baseball minds in the country. Other Ranger fans should count themselves lucky every time he sits down in front of a computer to write about his favorite team at Newbergreport.com.

Longtime Channel 11 weather dude Larry Mowry isn’t grab-you-by-the-lapels sexy.  His appeal is quieter and more durable –– a gentle, brainy, soft-spoken kind of heat anchored in high cheekbones, a killer smile, and the most hypnotically gorgeous eyes on North Texas broadcast news. The forecast is always steamy when Mowry is tracking weather fronts at the map.

It’s kinda cool that the hottest female celeb on local TV is named Remeisha Shade, but puns aside, it’s always easier to hear about a heat wave when the news is coming from Shade. Lithe and poised, with an arresting smile and hazel eyes that outshine the greenest colors on the Doppler, the ever-foxy meteorologist is a welcome sight in front of the ol’ chroma key, even when the weather news is not.

Simply an outstanding reporter whose byline you learn to look for. Whether she’s writing about autism, the West Nile virus, or wastewater plants, Heinkel-Wolfe gets to the bottom of things with grace and style. Her coverage over several years of the gas-drilling boom in North Texas shed light on its attendant problems that helped change the tenor of the conversation nationwide. She gets her facts straight, and her stories are a pleasure to read.

Former DJ on North Texas’ beloved but long-defunct rock radio station The Zoo, John Rody now brings his reputation, years of experience, and wry humor to bear on Fort Worth music via his relatively new web radio station. Co-founded with wife Sallie Rody, “The Pirate,” as it’s commonly known, is all Fort Worth music all the time. And there’s enough material to fill 10 radio stations. Thanks, John. 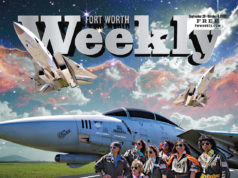