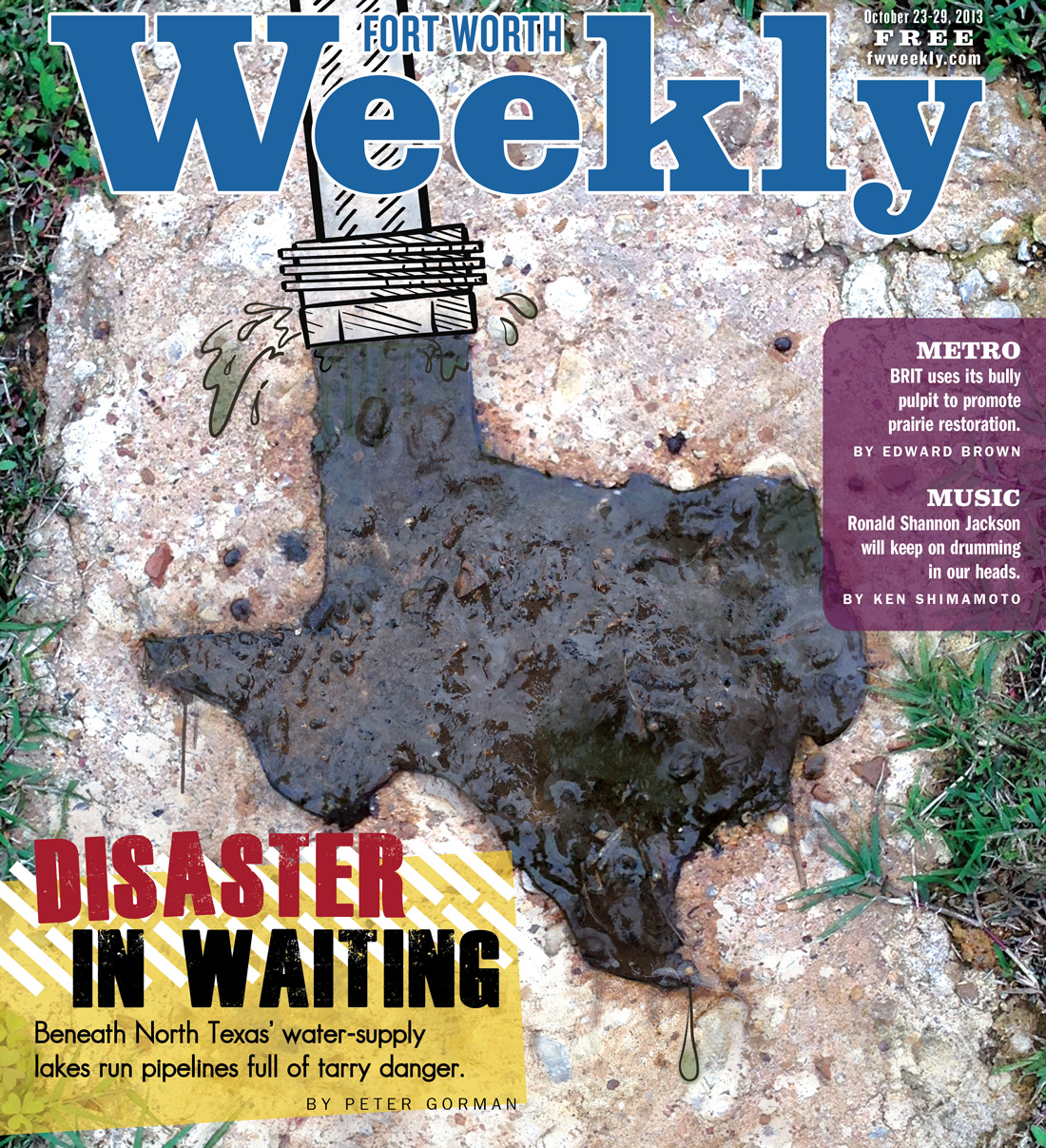 Southeast of Dallas lie two major reservoirs that provide 80 percent of the drinking-water supplies in and around Tarrant County. Below each of those lakes runs a pipeline; one is 65 years old and the other more than 40. And both have been used to carry tar sands bitumen — the heaviest and possibly most corrosive hydrocarbon ever pushed through a pipeline.

The companies that own them say older pipelines like these two are no more likely to rupture or leak than newer ones. Critics — including respected scientists and experts who worked in the pipeline industry for decades — say the lines represent major ecological disasters waiting to happen.

Company spokespersons say tar sands bitumen is no more dangerous to transport than other substances that have run through such pipelines for years. And yet, from Canada to Arkansas, tar sands spills have devastated neighborhoods, forced people permanently out of their homes, caused serious health problems, shut down part of a major river, and cost billions of dollars in cleanup and damages to affected property owners. The same pipeline that runs under North Texas’ Cedar Creek Reservoir ruptured last spring in Arkansas  and devastated a neighborhood.

According to a pipeline specialist with the Natural Resources Defense Council, tar sands pipelines — even new ones — leak or rupture at much higher rates than pipelines carrying other forms of oil or gas.

The Seaway pipeline beneath the Richland-Chambers Reservoir near Corsicana is carrying tar sands bitumen now. Enterprise Products bought the pipeline, which is more than 40 years old, from ConocoPhillips in 2011 in partnership with Enbridge Energy. A spokesman said the owners are planning to move the line from underneath that lake. But the companies have no plans to reroute another portion of the line that runs under tributaries that feed Lake Lavon, the main raw-water source for the North Texas Municipal Water District. It provides water for numerous cities on the north side of Dallas, including Richardson, McKinney, Plano, and Mesquite.

Right now ExxonMobil’s 65-year-old Pegasus line, which runs under Cedar Creek Reservoir, is shut down because of safety concerns stemming from the Arkansas disaster. The pipeline ruptured in March in the town of Mayflower, spilling more than 200,000 gallons of tar sands bitumen. The cleanup is still going on, and, according to one researcher, residents are still suffering from headaches, skin rashes, dizziness, and other health problems from emissions caused by the spill.

In the section of the Pegasus line running under Cedar Creek, eight defects have been found in the half-inch-thick pipe, according to an internal report by ExxonMobil.

“Five of those show a corrosion in the pipe wall of between 17 and 32 percent,” said Steve DaSilva, founder of the Safe Communities Alliance, a pipeline watchdog group. “And that’s eight too many chances of poisoning that reservoir.”

Both the Richland-Chambers and Cedar Creek reservoirs belong to the Tarrant Regional Water District.

Industry sources say older pipelines are subject to metal fatigue, corrosion, and ruptures or leaks due to the settling of surrounding soil. The fact that the flow in both the Seaway and Pegasus lines is reversed from the way the lines were used for years adds to the potential for problems, the sources said. (The lines formerly carried inexpensive oil from the Gulf to the Midwest.)

The former industry officials added that tar sands bitumen is nearly impossible to clean up. In the case of a slow leak into an aquifer or reservoir bed, which could go unnoticed for months or years, the result might be catastrophic.

Concerns over the pipelines running beneath North Texas water-supply lakes are just a small part of the major international debate over the tar sands industry, involving the White House, the Canadian government, native communities on both sides of the U.S.-Canada border, and a long list of environmental and resident groups. In Texas, a broad coalition of local residents and environmental groups has been fighting TransCanada’s Keystone XL pipeline, to run from Oklahoma to Port Arthur.

A major part of the problem, opponents say, is that federal regulators in the Pipeline and Hazardous Materials Safety Administration have little of the expertise or manpower needed to truly regulate the vast pipeline industry. And fines and even cleanup costs for spills are minor compared to the profits that the companies make off the lines.

“They played with people’s lives to make money,” explained a former oil industry executive who asked not to be named. “It’s the culture of the industry: Who wants to be the person who tells the boss he needs to invest a billion dollars in a new line to protect a couple of dozen homes from a future hypothetical problem?”