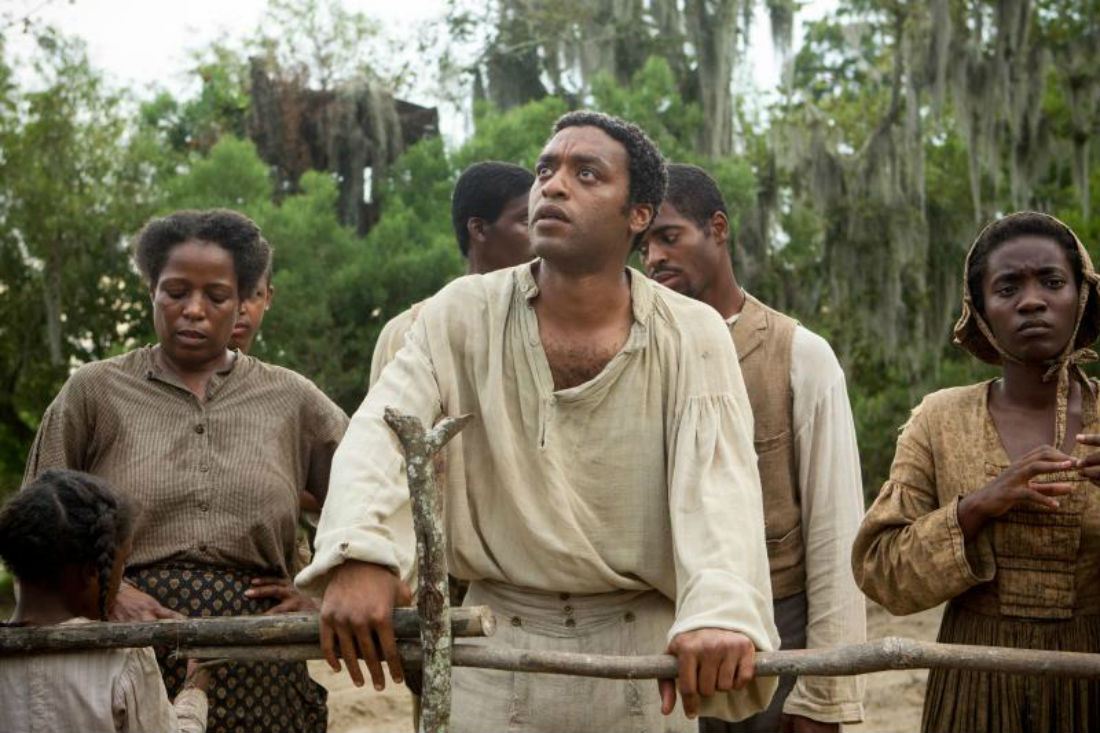 As is so often the case with great films, I had more thoughts about 12 Years a Slave than I could get into my review, and since the movie expands to many local theaters this week (in the wake of a strong box-office performance in limited release), now seems like an opportune time to get them in.

The film has received lots of rave reviews, as evidenced by the eye-popping 96% rating on Rotten Tomatoes. And yet there are dissenters, and Indiewire has collected them. Many of the naysayers claim that the movie is too pretty. Amazingly, I didn’t notice the movie’s visual beauty at all the first time I saw it. I was too caught up in the story, the acting, and the violence. It was only when I was selecting a publicity still to run alongside my review that I noticed that the photos were all quite beautiful. The cinematographer here is Sean Bobbitt, who was born in Corpus Christi but is a naturalized British citizen. He photographed McQueen’s previous films Hunger and Shame, as well as Derek Cianfrance’s The Place Beyond the Pines and Spike Lee’s upcoming remake of Oldboy. McQueen’s background as a video artist has come up often in the reviews, and more than one has pointed out that his gallery work “Lynching Tree” was used as a backdrop by Kanye West during a live performance of “Blood on the Leaves” at the VMAs.

You may have noticed that I only mentioned Django Unchained in passing in my review. Maybe that struck you as odd, given that I blogged about 3 zillion words on the movie earlier this year. There’s a reason I didn’t get into comparisons: Tarantino’s movie is fundamentally different in its approach. It’s a highly stylized and irreverent look at slavery. Some critics took Tarantino to task about this back when Django Unchained came out, but the filmmaker correctly pointed out that there haven’t been that many high-profile films about slavery in total, so we don’t have much of a context of conventionally made films on the subject to compare his work to. (Spielberg’s Amistad and Lincoln and Jonathan Demme’s Beloved are pretty much it.) Tarantino’s stylization accomplishes things that McQueen’s more straightforward approach can’t, but the reverse is also true. There’s nothing in 12 Years a Slave that matches the deflationary comic power of the scene in Django when the white supremacists complain about being able to see out of the bags on their heads. Similarly, there’s nothing in Django that matches the long take of Solomon dangling from that rope in 12 Years.

The movies do have one thing in common, and Roya Rastegar pointed it out in her otherwise critical review of McQueen’s film: Both 12 Years a Slave and Django Unchained examine white racism in meticulous detail. In most anti-racism movies (up to and including The Help and 42), the racist villains are cardboard. In these movies, they’re interesting. That’s no small feat, since racism is not in and of itself interesting. Django gives us Calvin Candie, who viciously upholds the status quo despite being relatively enlightened for the period. 12 Years gives us Hamilton and Brown (Taran Killam and Scoot McNairy), the frauds who deliver Solomon to the slavers, though Hamilton seems to feel bad about what he’s doing. It gives us Master Ford (Benedict Cumberbatch), who’s a kind master by the standards of the time, though as the slave Eliza (Adepero Oduye) points out, his kindness only extends so far. It gives us Armsby (Garret Dillahunt), the fallen overseer who doesn’t have the necessary violence in him to do his job well. And it gives us that fascinating and horrible married couple, Edwin Epps and his unnamed wife (Michael Fassbender and Sarah Paulson).

Michaela Angela Davis has a terrific post on Jezebel about the women in this film. She’s quite right; no one is whipping Mistress Epps or making her live in the dingy slave quarters, and yet she’s in a special kind of hell. Her husband is cheating on her and has told her in no uncertain terms that she matters much less to him than Patsey (Lupita Nyong’o). She can’t leave him because she has no place to go to — he alludes to her original home as a “pig trough,” and she undoubtedly has gotten used to living in a nice house. She can’t direct her rage at him because as her husband in the 19th century, he has all the power. So she hits Patsey with the whiskey decanter because it’s the only way she can exercise any power of her own.

The movie is filled with music, appropriate since Solomon Northup is a musician. A note about the song “Run, Nigger, Run” that Epps’ carpenter Tibeats (Paul Dano) sings to the slaves. You may be interested to know that this was originally a slave song, intended to encourage other slaves to escape but warning them of the dangers involved. Of course, in Tibeats’ rendering, it becomes a taunt. Tibeats is like a prison guard who jingles the keys for the prisoners to hear, reminding them of what they don’t have. In his review of the movie in Time, Richard Corliss perspicaciously points out that Solomon’s anguished performance of “Roll Jordan Roll” acts as a bookend and a rebuke to Tibeats’ hateful song.

There’s no shortage of fact-checking pieces that tote up where McQueen’s movie departs from Northup’s story. Noah Berlatsky at The Atlantic examines how these departures enhance the film’s emotional truth. Elsewhere, Kendra James has an excellent review at Racialicious, especially strong how the movie depicts the passing of the 12 years of Solomon’s slavery. Wesley Morris discusses the movie on Grantland, and he’s always enlightening on movies about race. And Dana Stevens on Slate says something keen about the movie’s ending, which she calls “the unhappiest happy ending I’ve ever seen.” She’s right; Solomon regains his freedom, but you can’t see him break down in front of his family without remembering all the millions of slaves who never regained theirs, or never knew it to begin with.