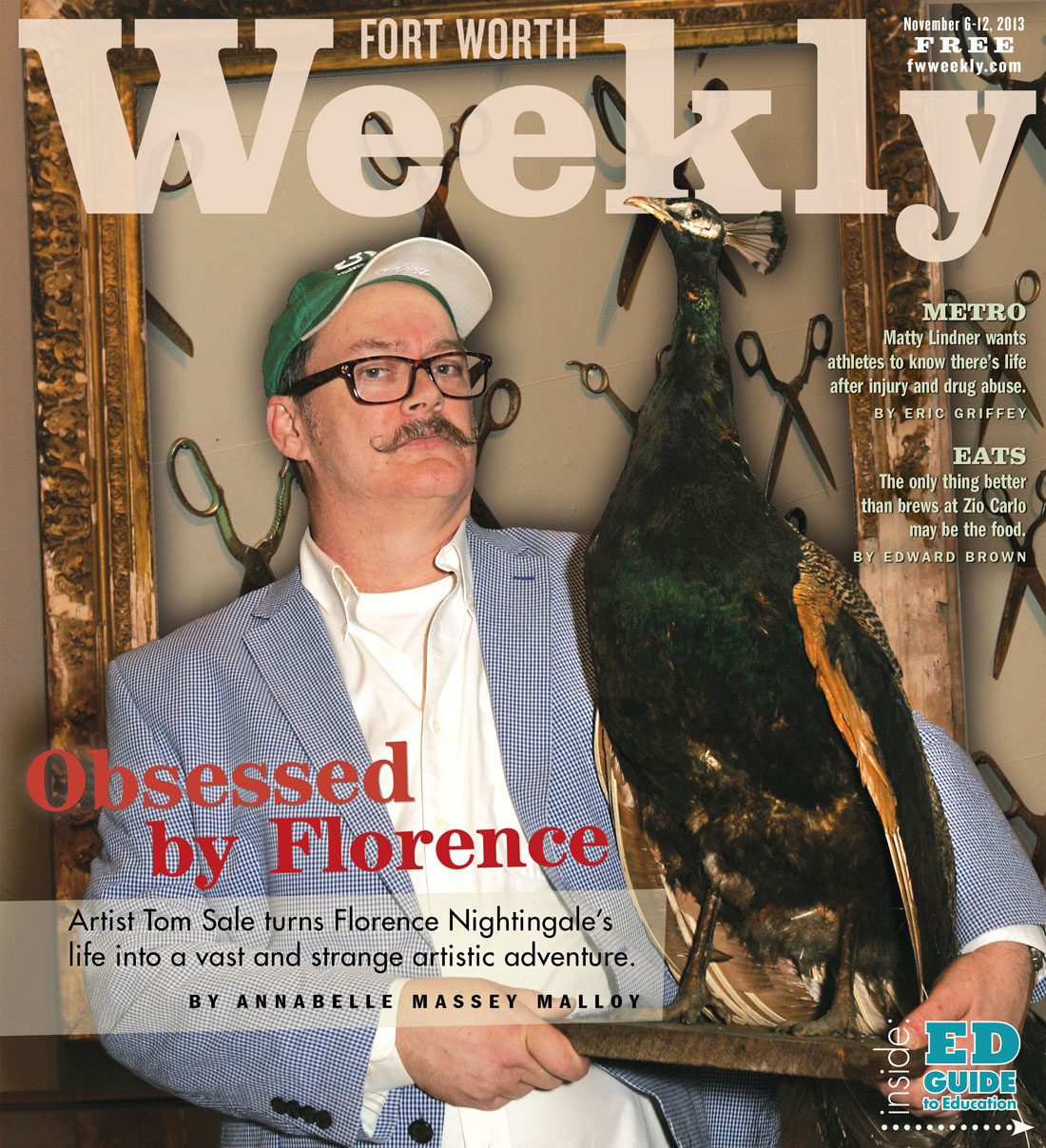 For Julie and Bruce Webb, outsider art is a passion. The Waxahachie collectors lecture and curate exhibits at universities and museums around the country involving the work of those iconoclastic artists. Beat-generation writer and artist William S. Burroughs’ last exhibit was at their Webb Gallery.

Which is why the couple didn’t blink at the idea of installing a vast exhibit that includes various pewter casts of human big toes and thumbs, a few gold-painted dried animal corpses, “stump pillows,” and a shadow box that holds dryer lint and human teeth –– among other more traditional art objects and some that are every bit as zany as those. And the whole thing celebrates (if pewter toes can be said to celebrate) the fictionalized biography of a nurse who died more than 150 years ago.

The collection is The Florence Project, the magnum opus of North Texas artist, collector, and art teacher Tom Sale, who has spent three years and about $10,000 in an obsessive quest to weave historical fact with fantastic fiction around the life and times of Florence Nightingale, who helped revolutionize nursing care and other aspects of medical science, especially at military hospitals.

Julie Webb helped Sale, a longtime friend, focus his ideas for the project. She immediately saw how “The Florence Project” could fit into the gallery and its artistic mission.

“It was obvious how serious Tom was about this project,” Julie said. “Even though he is thoroughly educated in art, he still has the intensity and obsessiveness common to the self-taught artists we love.”

“And he’s a storyteller,” Bruce Webb added. “Tom’s pieces are all stories that hold your interest, like ballads in music.” Sale himself likens the story he is trying to tell to a book or a movie.

Even Sale can’t completely explain the origins of his obsession with Nightingale, although artistic obsessions of one sort or another seem par for his course. For him, the macabre is the sublime, and there’s nothing so interesting as a mystery. He’s comfortable expressing himself through visual art in various media –– mostly under the pseudonym of Pinky Diablo –– as well as developing characters and plot points to tell dramatic stories. He’s keen on history, even as he takes people and events on obscure, odd, and grisly tangents.

The Florence Project represents the most intense obsession in his artistic and literary life. It could be a milestone in a career that’s been in the making since a young kid started drawing monsters and made a tiny sarcophagus for a dead mouse.

Every Monday, Wednesday and Friday, Sale brings a large cup of coffee and a unique savoir faire to his art appreciation class at Hill College in Hillsboro. He’s 6’ 2” and wears horn-rimmed glasses, which give the 52-year-old a casual, professorial air.

His rural and small-town students, most just out of high school, yawn and rub their eyes. Activities and presentations are designed to intrigue them. Sale shows large photos of famous paintings by Van Gogh, Mary Cassatt, Edward Hopper, and Hieronymus Bosch. He wants his students to know these artists’ signature works, their time in history, and their impact on the future of art.

“They’re fairly interested,” Sale said. “I did mention Florence Nightingale one day, and I was shocked to find out how many of them had never heard of her.”

Academia forms the backbone of Sale’s career. Since 1991 he has taught art at Navarro College in Corsicana, Cedar Valley College in Lancaster, and Brookhaven College in Dallas. He has been a full-time faculty member at Navarro and now at Hill College.

College campuses have been part of life from his earliest memories; he seems to need the sense of refuge they provide.

“My parents both taught at the University of North Texas. I grew up in Denton,” Sale said. “My mother [co-]wrote the most-used college drawing textbook in the U.S. It’s called Drawing: A Contemporary Approach.”

His father, Dr. Richard Sale, was a professor in literature and his mother, Teel Sale, a full-time lecturer in art. (Both are now retired.) Dr. Sale was a Fulbright scholar in Morocco in the early ’60s and took the family with him to live in Rabat.

Sale thinks of those early experiences — he was 2 or 3 — as both prophetic and indelible.  “I remember drawing  one of my first titled crayon drawings there. I called it ‘Rudolf Serkin Eating Peas.’ ” A preschooler who knows the name of a famous pianist from another country is interesting enough, much less one who would “title” a crayon drawing with the pianist’s name.

Teel Sale has vivid memories of Tom’s art awakening. “He was very young, and he began drawing monsters. But he placed a sheet of paper over his hand to cover the monsters as he drew.” She laughed. “He realized the power of art at a very early age.”

Back in Denton and with both parents ensconced in a large university, Tom was treated to music lessons, art lessons with esteemed art faculty members, creativity camps, electronic music studio sessions — more than the average child could dream of. Dr. Sale influenced his youngest son with poetry and storytelling.

His father “told me recently that literature from the mid-19th century — Florence’s time — was his favorite,” Sale said. “It’s not a coincidence, I think.”

Sale was the youngest of three brothers, and his siblings were 7 and 9 when he was born. “I guess I would’ve been a mama’s boy, being the youngest,” he mused. “But she was not only my mother, but a prolific artist.”

“I don’t remember him playing with toys or having any toys,” Teel Sale said. “His toys were things he made.” Her youngest son loved things in boxes and made box-based toys until he was about 8. In the early 1970s, when the Treasures of Tutankhamun exhibit began to be shown in the United States, she remembers Tom entering what she calls “his Egyptian period.” He found a small box and covered it with rudimentary papier mâché to form a sarcophagus. He hunted around until he found an actual skeleton of a mouse and proudly presented his parents with “Tut Mouse.”

“He always wrote poems and stories. His dad, Rick, is a poet,” Teel Sale said. “Rick occasionally read his students some of Tom’s work. He made a collection of poems called ‘Cement Poetry’ when he was 10.”

These days, Sale understands how his unique childhood informs his art and writing. “But then, I didn’t think what I got to do was any different” from other kids.

In 1983 Sale earned a bachelor of fine arts degree from the University of Texas at Austin. He returned to Denton for an MFA in painting and drawing at UNT, where he met his wife, Dottie, in 1989. Dottie Love, as she is known professionally, was an art student and photographer. Love now teaches animation and computer-based design and drawing at Hill College, but her personal passion is raising Zebu miniature cattle.

“That’s why we ended up on a farm,” Sale said. They live on 25 acres in Bardwell, outside of Ennis. Sale’s parents recently built a house on part of the land.

Love recently showed some of her animals at the State Fair in Dallas. “We have a nice life together and some passionate hobbies we do individually,” Love said, in a phone interview from the farmhouse.

She’s used to her husband getting fixated on one topic after another. “There was a long study of Mamie Eisenhower and another of the French Revolution,” she recalled. “He was fascinated by Charlotte Corday, who killed Jean-Paul Marat in the bathtub.” A brief obsession with icebergs led him to do a six-month artist’s residency in Newfoundland to study them.

Love noticed when Sale’s interest in the Ottoman Empire and Florence Nightingale moved from exploration to obsession. “I remember … other obsessions, but none was like this one,” she said.