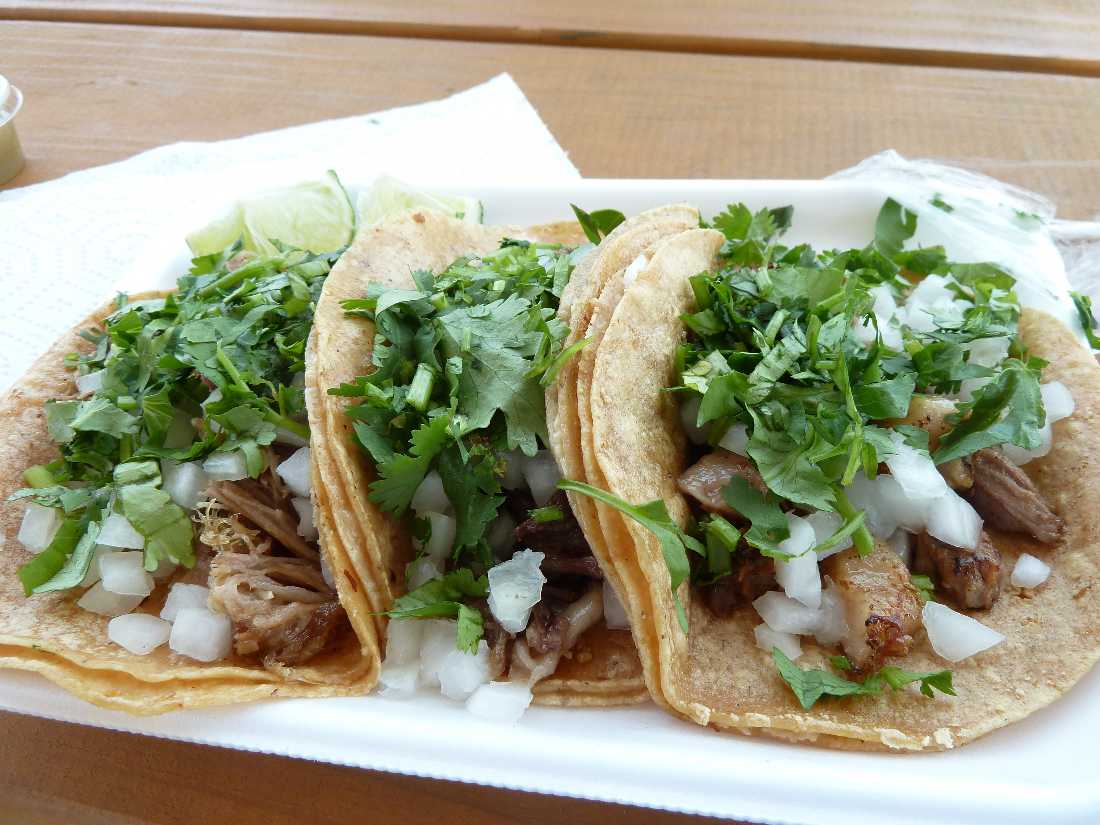 Chow, Baby was sad when La Media Naranja (961 W. Magnolia Ave.) closed its doors earlier this year. The tiny taqueria/juice bar was never that busy, perhaps because the building is set back from the road and thus failed to attract much casual passing traffic, especially considering all the competing eateries on that street.Though my figurative heart is broken, my physical heart may end up all the healthier for it. I’m going to miss putting on my fat pants and gorging on the place’s Cuban sandwich with ham, sausage, avocado, fried eggs, pickles, and 90 other ingredients.

I’m happy to report that its replacement is fantastic. Tina’s Cocina is more of a traditional-looking taqueria, with counter service and an open kitchen, but the food is anything but run of the mill. The kitchen’s emphasis is on fresh flavors, and Mexican tradition is treated as law.

The posole ($5.99), a traditional Mexican soup, is made with garlic and peppers in a light green sauce. It’s packed with tender shredded chicken, hominy, serrano peppers, and radishes and sprinkled liberally with oregano. The taste is refreshing, spicy, and seductively fragrant, and the oregano adds a fresh quality. The chicken tortilla soup ($4), with carrots, crunchy strips of fried tortillas, queso blanco, and shredded chicken, is also light and fresh tasting, albeit gooey from the cheese.

The menu offers dishes like tortas, pollo ranchero, and fideo with picadillo (a Mexican noodle dish with seasoned ground beef, tomato sauce, and vegetables), but I was there for the tacos. I’m drawn to meat-filled tortillas like a moth to flame. Choosing a taco filling is like picking a favorite among children. Even though I have my preferences, I hate to admit them aloud. So my guest and I ordered as many as we could handle.

There’s nothing more satisfying than well-marbled pork browned slowly in its own rendered fat. The result in this case was a fragrant carnitas taco ($1.99), seasoned with bay leaves, fresh orange slices, and spicy peppers — tender and moist, with a trace of citrus. The desebrada taco ($1.99), filled with slow-cooked, fork-tender brisket marinated in a tomato and pepper sauce, was browned and crunchy on the edges. Maybe the best of the lot was the oily, salty chorizo taco ($1.99), marinated in chile seco sauce with allspice and cumin. All of the tacos are served on double-layered corn tortillas, with chopped white onions and cilantro.

The red hot sauce was a divine amalgam of tomatillos and red peppers. The green sauce, with a hint of garlic and salt, could have used a bit more of a kick.

I have a long-standing animosity toward televisions in the dining room. Since I was raised by a television, they’re like campfires to me, and I can’t help but stare. On our visit, the television was on, but the sound was off. I managed to tear my gaze away from the idiot box and focus on the up-tempo Spanish language pop music softly piping through the speakers.

The small dining room has floor-to-ceiling windows, creating an open and bright atmosphere. The walls are lined with colorful abstract paintings. Though the yellow booths look like holdovers from a Subway sandwich shop, the dining room is laid out expertly, making excellent use of the space.

Though I miss my heart-attack sandwich from La Media Naranja, those tacos really lightened the blow, if not my cholesterol level. This could be the beginning of a beautiful relationship.