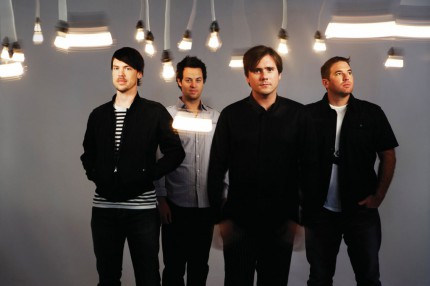 After more than two decades as a successful national band, the Arizona-based modern rock quartet Jimmy Eat World can say they beat the critics in one way: They outlived the dreaded label “emo.” Somehow, lead singer-songwriter Jim Adkins got dragged into that oft-derided genre at the height of Jimmy Eat World’s international commercial success with its self-titled album in 2001. Adkins wrote more intimately and thoughtfully about romantic pain than many traditional male rock composers, so into the heap of over-sensitive boy poets he was tossed. The band was simultaneously annoyed and amused at the “emo” label, said Rick Burch, the group’s longtime bassist.

“We thought it was unfair to all the bands” who got slapped with the term, he said. “Our music could be very emotional, but so was Fred Durst’s [former frontman for Limp Bizkit]. All the so-called ‘emo’ groups played different styles of music, but [some music writers] decided to concentrate on just one side of our sound.”

“Emo” is now a near-forgotten curio label from the so-distant ‘00s, and Jimmy Eat World is a band still writing and recording new music and, most importantly, still selling out gigs all over the world. (Their last album, 2013’s Damage, earned some of the best reviews of the band’s career.) Burch thinks the band’s early decision to tour constantly and keep their audience base fresh and cultivated is part of the reason. They’ve also enjoyed a steady two-decade recording career with a series of (mostly) supportive corporate and independent labels. This has allowed them to develop their sound through fast-changing times and tastes, while still keeping Adkins’ signature adult heartbreak at the center.

“You have to have a fixed vision [for the music] and ignore the hype, the sales, the labels,” he said. “We’ve always made sure to surround ourselves [in the studio] with musicians and producers who’d make us sound as good we could. And we’re always writing down ideas for songs, scribbling them in notebooks and going back home [to Tempe, Arizona] to try them out in rehearsal.”

Burch said the members of Jimmy Eat World are now working on re-releasing some of their early singles and albums in a different format to satisfy younger fans. Yep, Jimmy Eat World has been around long enough to have young adult fans just now discovering their sound. The format for the re-releases won’t be mp3, but vinyl LP disc. In rock and roll, everything comes around again if its bedrock cool quotient transcends the hipness du jour. Hence Jimmy Eat World as a vinyl band for millennial listeners.