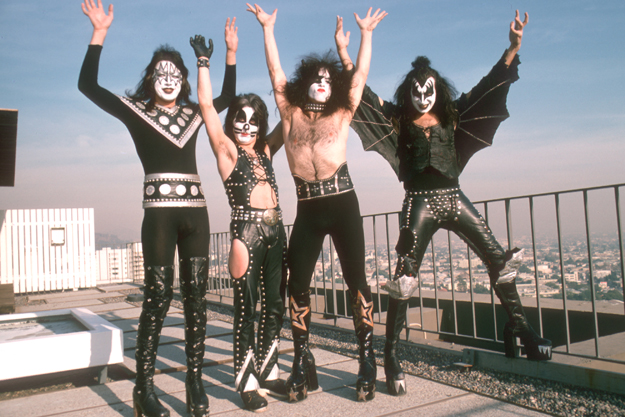 1.) I, for one, don’t mind living in the past. Holding up five fingers and a thumb saves my friends who aren’t Steelers fans the embarrassment of having to admit they’re devoted to lesser NFL franchises. (Note: That’s all of them.) And as a child of the late ’70s, sometimes all I want to do is grab a six-pack, a boombox, some cassette tapes, and a pack of smokes and party in the woods by my house like the burnouts used to do beneath the bridge by the ballfield in my old neighborhood. Say what you will about “Bennie,” Mickey, “Goober,” Rogo, and the rest of that gang, but they had quantifiably good taste in music. We Little Leaguers were regularly treated to a steady dose of Zeppelin, Sabbath, and The Who. One band I’m nearly 100-percent positive we never heard and that the adults never had the pleasure to complain about was KISS, which was odd, considering that Paul Stanley, Gene Simmons, Ace Frehley, and Peter Criss ruled the era. They were one of my faves, and even though I was a tot I had exceptional taste in music (Gary Numan, Saturday Night Fever, Yes, The Cars, Rick James, Genesis, Heatwave).

I still do, in fact, have good music taste, which is why I have no shame in calling attention to the KISS show Sunday at Gexa Energy Pavilion (1818 1st St., Dallas, 214-421-1111) with Def Leppard and some outfit called Kobra & The Lotus. I know, I know. It’s not the original KISS, just Paul and Gene, it’s not 1977, and the show’s on a school night. But any chance you get to experience the ridiculous, fiery spectacle that is a KISS concert is worth maybe getting a babysitter for.

And then there’s the music. I have not heard nor do I have any interest in hearing anything that came out after KISS Alive II. No matter how good the newer material may be (though I am inclined to believe it is less than good), it was created after the magic had dissipated, after all of the stars that had aligned –– over the studios where the early material was written and recorded and over the heads of the ’70s-era kids who were too young for punk, disco, and glam and too rebellious for folk and C&W –– had begun drifting apart. By the early ’80s, our ears had changed as much as KISS’ music. All that was left was the past, and something tells me that a majority of Sunday’s show will be spent between 1974 and 1977 –– Paul and Gene know which side their bread is buttered on, the side covered in glitter, dollar bills, and mold.

And why not? KISS’ early stuff is awesome. In fact, some of the best crotch-rock anthems of all time were penned by these Brooklyn Jews, the optimum word being “crotch” –– Lennon and McCartney Stanley and Simmons are not. “She’s a dancer / A romancer / I’m a Capricorn, and she’s a Cancer”; “She’s worth a deuce” (which would later make Simmons brag that he had no idea what “deuce” meant, just that it sounded cool); “I’m the king of the nighttime world / And you’re / My / Headlight queen.” We could go on for days. Just know that even in context, the lyrics seem to be the handiwork not of twentysomething men but priapic 17-year-old boys.

But, man, did KISS rock. From a technical standpoint, what I love best about their great songs are their structures and arrangements: Sometimes the guitar’s going one direction, the bass another, and the vocal melody in an entirely different direction altogether. That’s some pretty deceptively complicated stuff. I bet if Bennie, Goober, and the other burnouts weren’t so damn dour, our Little League games would have been a lot livelier. And a lot more fun.

“You’re such a jewel in the rouuuuugh! / You wanna show me your stuff!” Haha. I mean. Who writes that shit!

2.) Back from a shortish but jam-packed tour, Quaker City Night Hawks will headline Friday on the Green tomorrow night at Magnolia Green Park on the Near Southside (1100 Lipscomb St.) with two other local melodic-rock outfits: Foxtrot Uniform and Missing Sibling. As always, no cover. By the time Quaker City hits the stage, the sun should be low in the sky and the beer flowing like water.

3.) π bassist Brandon Fawks is a Fort Worth cat, so there’s that. But stop pretending you’re a homer like me. Just know that if you dig moody, loud, psychedelic rock, the Austin-based Fawks and company are pretty badass. They’re playing Sunday in Denton at Rubber Gloves Rehearsal Studios (411 E. Sycamore St.) with Psychotic Reaction and She Banshee. Cover is $5-7.

4.) When I was kid, Yngwie Malmsteen was a revelation. He was just so damn fast. I probably actually enjoyed only two or three of his wonky suites, but, damn, if I didn’t listen to that shit every day. The fact that someone could conjure up so many notes without tapping was miraculous. The first time I saw a fellow adolescent guitarist sweep-pick, I spent pretty much the entire next month practicing. I got pretty good at it, but then I discovered girls and forgot all about guitars and guitar playing and being fast and heavy metal music, basically, anything that wasn’t curvy and smelled good. My music tastes also turned toward New Edition, Lisa Lisa & Cult Jam, and Force MD’s. See? Great taste. “Exceptional” taste.

Not too long ago, I overheard someone mention that Yngwie got fat, so out of sheer morbid curiosity –– he was quite the prima donna in the ’80s, the kind of guy you thought would go to great lengths to remain young and beautiful forever –– I looked him up on YouTube. Sure enough, the formerly svelte Swede had gained a few L-Bs, but what he had lost in reasons to show off he had made up for in likeability. Performing “Voodoo Chile” with two other badasses, Joe Satriani and Steve Vai, at what, based on the silver tinsel curtains, is a prom, Yngwie has a ball, jumping all over, singing crazy on the mic, acting like the total antithesis to the pompous young punk he was back in the day. And it’s awesome.

5.) Saturday’s show at Lola’s Saloon (2736 W. 6th St., 817-877-0666) is –– and should be –– all about Exit 380, the North Texas alt-roots rock quintet that’s celebrating the release of a new album, Photomaps. But since Goodwin’s on the bill, we must digress. One of my all-time favorite North Texas bands, the quartet of frontman Tony Diaz, guitarist Daniel Gomez, bassist Matt Hembree, and drummer Damien Stewart have been recording their third album for going on 10 years now. Eee-yeah, it’s probably not gonna happen, but I’m glad they’re at least on life support. With muscular riffage and hyper-melodic vocal lines, Goodwin is not reinventing the wheel –– mixing Cheap Trick with The Who with The Toadies with The Cars even with Springsteen, Diaz and company are just making the wheel better. Highly recommended for fans of good, strong, punch-you-in-the-face-then-kiss-you-afterward rock. And for young rockers who want to see how it’s done.

The bill also includes Johnny Thunder & The Turtle Burgers and Chase Ryan & The Grave. Cover is $10.