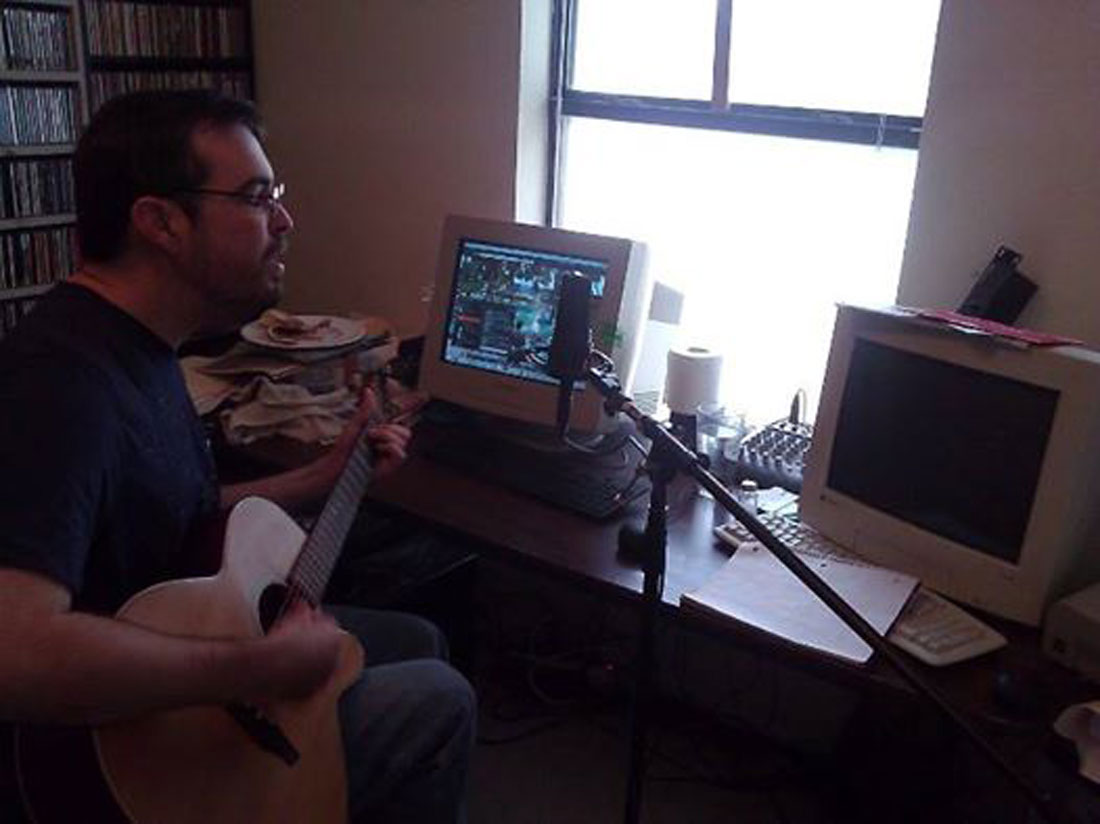 Singer-songwriter Matthew Broyles is setting up for a gig. He’s seated in front of a microphone with his playlist at his feet, tuning his acoustic guitar and lightly running through some of the chord changes he’ll be performing. But he isn’t onstage. He’s in the cozy confines of his White Settlement house. And instead of a crowd of people in front of him, there’s a computer monitor full of avatars.

Broyles and the virtual concertgoers are part of an elaborate computer game. In Second Life, their avatars are human-looking, and they interact across detailed replicas of real-world places like New York City and Chicago. Unlike most computer games, which emphasize fantasy universes and defeating opponents, Second Life is for folks seeking to re-create everyday experiences via virtual reality, including music concerts.

On this day, Broyles is sharing the stage with violinist Beth Odets-Brown, a frequent collaborator who improvises over Broyles’ songs, performing from her home in Dallas.

As the two musicians slink into their first song, Doug Kwartler’s “Just About to Die,” the virtual concertgoers begin dancing. Over the next hour or so, the revelers –– or, more accurately, the people watching the concert from their computer screens –– will tip the performers in Linden dollars, a type of currency used on Second Life that can be exchanged for U.S. dollars through PayPal. A typical tip amounts to a couple of bucks, Broyles said.

Broyles began playing Second Life several years ago as a way to maintain his sanity, he said, while staying home to raise his and wife Janell’s son Nathan.

Frustrated with not being able to play as many shows as he had before Nathan’s arrival, Broyles was intrigued by an article in Popular Science about Second Life.

Broyles, who also performs in the hillbilly hip-hop outfit Shotgun Friday, said most of his friends dismiss his virtual pursuit as frivolous, but he’s quick to remind them that behind every “pixel person” is a real person.

“A lot of them are shut-ins, disabled, or otherwise unable to leave the house and see gigs,” Broyles said. “So I’m performing for people who aren’t ordinarily able to see shows. I find they are more appreciative than some bar crowds who are there to drink and make out.”

Odets-Brown said that performing in Second Life has become her largest source of musical income. Being able to play any way she wants, she said, has made her a hot commodity. Her most lucrative Second Life gigs are private parties, including weddings, for which she receives a flat fee.

Her avatar will sport a “little tuxedo and wander around a restaurant,” she said. “The pay is pretty comparable to something I’d do in real life.”

Longtime concertgoer and Minneapolis resident Ursula Cinquetti said that, as an introvert, she is uncomfortable in crowded, loud bars. Second Life lets her explore new artists and new types of music without leaving her “drained of all her energy.”

One of Broyles’ favorite venues is a replica of the Chelsea Hotel. Though the famed New York City hotspot doesn’t have a concert hall, its virtual version does. Virtual proprietor Enola Vaher, who lives in Oklahoma, added one just for hard-working cats like Broyles. Since opening in 2009, the virtual Chelsea has, with help from a New York Times story, become one of Second Life’s most popular venues, attracting several hundred visitors per week. Vaher, who books the performers, and the virtual hotel’s designer, Michael Brown, seek a very specific type of performer: live and acoustic only.

“There are no backing tracks,” she said. “The musicians have to play their own instruments live while they sing.”

Broyles, who has been performing at the Chelsea since its opening, is “sort of a standard here,” she said. “He does covers, but they are never your typical covers. And his originals are absolutely wonderful.