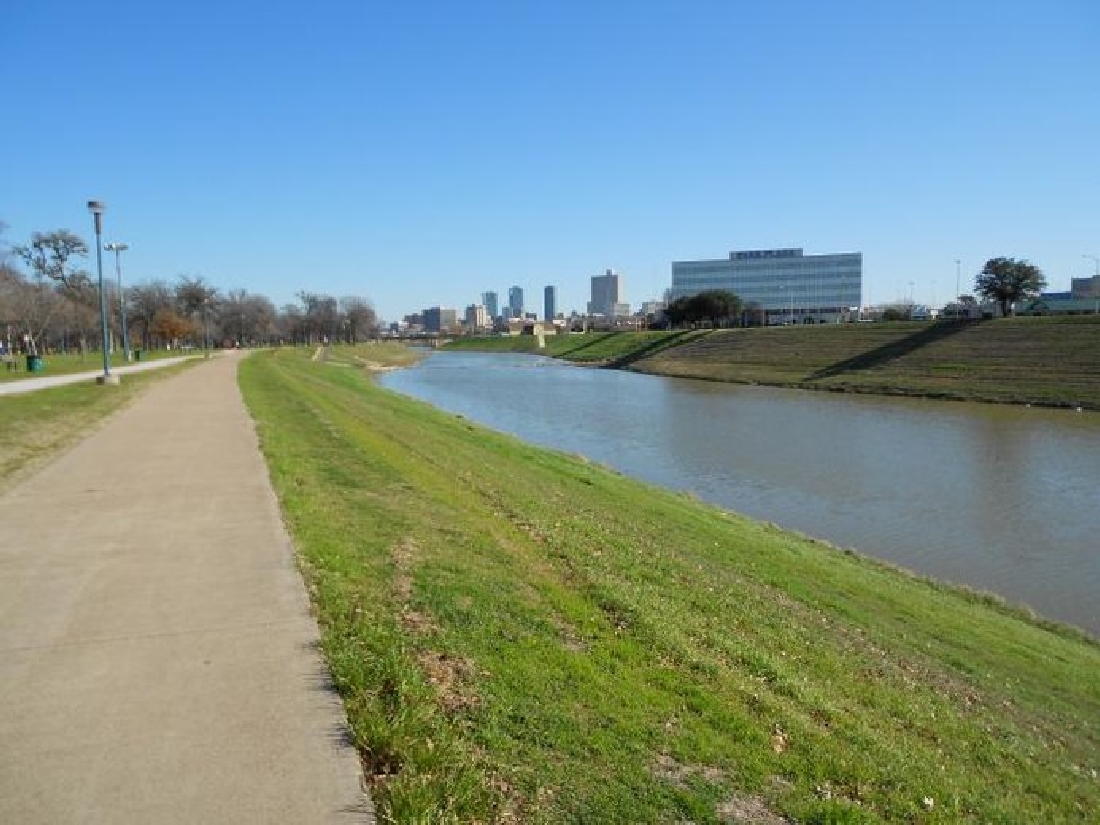 While I haven’t covered all 40 miles of Fort Worth’s Trinity Trails, I’ve biked the lion’s share of that meandering ribbon. My all-time favorite ride is crossing the river from east to west via the low-water dam near 4th Street, by the Martin House Brewery.

I love it because — even pushing 60 with one bad knee — I can, as I race down the incline, maintain the illusion that I’m not quite over the hill yet. But it’s more than that.

As I cross the dam, egrets and herons take off. Out of the corner of my eye, I spot a few fishermen casting their lines into the Trinity, and then for a few fleeting seconds I am at the level of the river as it rushes into the sluice gates, then exits, thundering, right below me.

Just a little way north is another favorite ride. Heading north, the trail runs between the river on the right and I-35W on the left, with its conveyor belt of 18-wheelers clogging traffic semi-permanently. After pedaling up a 45-degree incline, you can look east at one of the best views in Fort Worth. Below you, the land slopes gently to the Trinity. Across the river, on the eastern shore, the bank rises slowly. But just past Oakhurst Scenic, it rises abruptly to a tree-covered bluff.

And your eyes take it all in: the river, its banks, roofs popping up amid tall oaks, and if you’re lucky, maybe a red-tailed hawk making a wide gyre, having already spotted its prey somewhere down along the river. In a few weeks, when some trees flame red and bright yellow, it’ll be a real wonder to behold.

Yet not all is sweetness and light on the trails, and I’m not just talking about the occasional rudeness of a few trail-hogging bicyclists or oblivious hikers walking two or three abreast. A much deeper problem exists here in Fort Worth. Namely, that how well kept a trail is depends on which side of town it’s going through.

West of Trinity Park, going through more affluent neighborhoods, the trail is first class, well maintained and marked, including detours when repairs are under way. Plus, the detours are almost always laid out with crushed limestone. The rest of the trail should be in such good condition.

Just north of downtown, it’s a whole different story. Awhile back I was riding there on a detour that, for some inexplicable reason, slanted rather steeply, on a section surfaced not with crushed limestone but soft sand. A fellow bicyclist walking his bike said I was brave for continuing to ride. I decided pretty quickly he was wrong: I was being foolish.

This past summer a friend and I were riding on the North Side near Lincoln Park when suddenly the trail just stopped. There was no sign. No detour of crushed limestone or even sand. Nothing. We got off and walked our bikes to a footbridge, and voila, the “lost” trail was found.

Particularly glaring is the difference in how the trail is maintained in Meadows West Park in the upscale Bellaire Park North neighborhood compared to Gateway Park in the not-so-upscale Riverside area. Both trails go through woods and over many footbridges. But in Gateway the wooded sections of trail are in poor repair, as are the footbridges. Yet I’ve always found the Meadows West Park trail to be in A-1 shape.

In Fort Worth, we’re lucky to have these trails, which help attract businesses and keep the citizens healthy. They’re a true blessing, but they should be a blessing for all of us, not just for those who live on the “right” side of town.

The city maintains the trails that run through its parks, and the Tarrant Regional Water District takes care of the rest. But as far as I can discern, neither entity is maintaining the trails equally for the benefit of everyone. And that is a real injustice to all of us, one that should be corrected promptly.