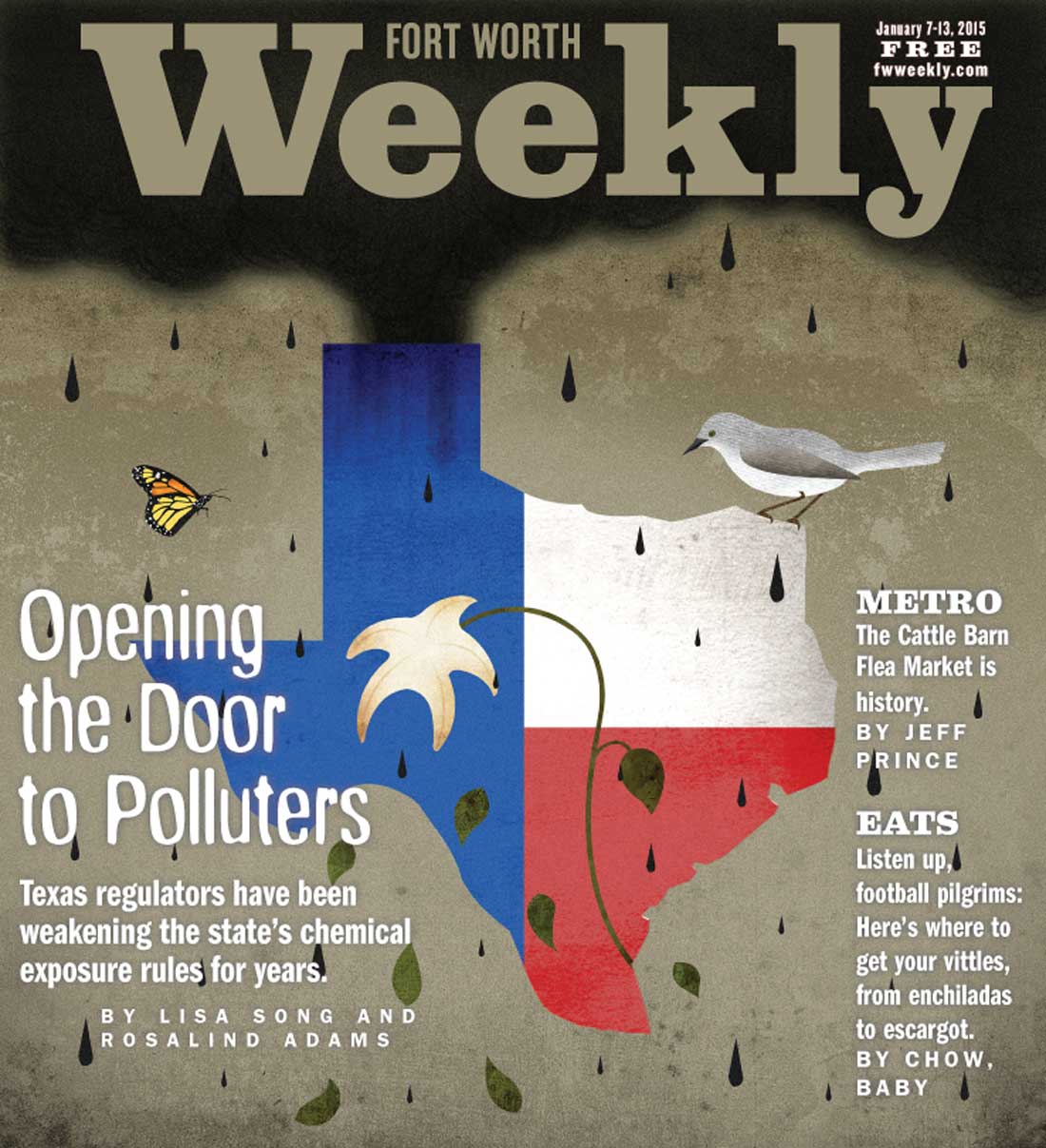 In 2007, Texas regulators quietly relaxed the state’s long-term air-pollution guideline for benzene, one of the world’s most toxic and thoroughly studied chemicals. The number they came up with, still in effect, was 40 percent weaker, or less health-protective, than the old one.

The decision by the Texas Commission on Environmental Quality was a boon for oil refineries, gas drillers, and other benzene-emitting facilities, because it allowed them to release more benzene into the air without triggering regulatory scrutiny. But it defied the trend of scientific research, which shows that even small amounts of benzene can cause leukemia. The American Petroleum Institute, lobbyist for some of the nation’s largest benzene producers, privately acknowledged as early as 1948 that the only “absolutely safe” dose was zero.

It’s “the most irresponsible action I’ve heard of in my life,” said Jim Tarr, an air-quality consultant who worked for TCEQ’s predecessor agency in the 1970s. “I certainly can’t find another regulatory agency in the U.S. that’s done that.”

The benzene decision was part of a sweeping overhaul of Texas air-pollution guidelines. An analysis by InsideClimate News shows that TCEQ has loosened two-thirds of the protections for the 45 chemicals it has re-assessed since 2007, even though the state’s guidelines at the time were already among the nation’s weakest.

The changes are being supervised by TCEQ toxicologist Michael Honeycutt, who began updating the way Texas develops its guidelines in 2003, when he was promoted to division chief. A genial, bespectacled man who takes great pride in his work, Honeycutt is a trusted advisor to top TCEQ officials and often acts as the agency’s scientific spokesman. He is also a frequent critic of federal efforts to reduce air pollution.

Honeycutt’s actions reflect Texas’ pro-industry approach to air quality, which InsideClimate News and the Center for Public Integrity have been examining for the past year and a half.  Most of the air-quality guidelines the state’s oil and gas producers are supposed to meet are not legally enforceable. That means violators are rarely punished, and residents who complain about foul air near drilling sites have few places to turn for help.

Texas has made its anti-regulatory stance known on the national front. Attorney General Greg Abbott, now governor-elect, has taken legal action against the Environmental Protection Agency 19 times since 2010, arguing that overly restrictive regulations stifle business growth, cost jobs, and threaten the state’s economy. The EPA is “a runaway federal agency that must be reined in,” Abbott said last year when he challenged greenhouse gas regulations.

Honeycutt has publicly criticized the EPA for being overzealous in its regulation of ozone, which exacerbates asthma; particulate matter, a known respiratory hazard; and hexavalent chromium, the cancer-causing chemical that launched the Erin Brockovich case. In testimony before a congressional committee in 2011, Honeycutt said the EPA had been overly cautious in evaluating the toxicity of mercury, a powerful neurotoxin known to lower IQ. Mercury is particularly harmful to developing fetuses.

“EPA ignores the fact that Japanese eat 10 times more fish than Americans do and have higher levels of mercury in their blood, but have lower rates of coronary heart disease and high scores on their IQ tests,” Honeycutt wrote, responding to questions from a committee member after the hearing.

State Rep. Lon Burnam, a Fort Worth Democrat who has tried for years to strengthen Texas’ public health regulations, said Honeycutt’s role as chief toxicologist is more political than scientific.

“I consider him an apologist for the polluters,” Burnam said. “I think he doesn’t give a tinker’s dam about public health.”

Honeycutt said the toxicologists on his staff are good scientists who take their jobs seriously.

“Our friends and family live in this state too,” Honeycutt said. “My son wants to go to school in Houston, and I want him to be just as protected as every other kid in Houston.”

Scientists interviewed for this story agree that Texas needed to update the process it uses to set air-quality guidelines. When Honeycutt took over, he introduced formalized methods of risk assessment, an interdisciplinary field of science that includes toxicology, epidemiology, and biostatistics.

Risk assessment has become the most widely used method of determining the health risks chemicals pose to the public. But scientists say the process has inherent uncertainties that open the door to bias.

“This is done across the spectrum, not only from those more inclined to have higher permissible standards, but also by those that would like to have lower ones,” said Maria Morandi, a private consultant who formerly worked as a health scientist at the University of Texas School of Public Health in Houston.

The problem, Morandi said, is that finding the scientifically “correct” exposure level for each of the thousands of chemicals that industries release into the air is impossible because it would require exorbitantly expensive experiments or illegal and unethical testing on humans. The best scientists can do, she said, is extrapolate data from existing studies and hope the numbers they produce are low enough to protect most people.

The potential for bias comes when the risk-assessment team chooses which studies to include or exclude and how to weigh the available evidence. Some scientists believe many existing standards aren’t strong enough. Others take the view that overly protective standards place needless burdens on industry.

Bias in risk assessment is rarely a product of fraudulent science, said Ruthann Rudel, director of research at the Silent Spring Institute, a research center in Massachusetts, but rather a reflection of how scientists choose to frame their analysis.

The InsideClimate News analysis shows that in Texas, the bias tilts toward industry.

As of September, nearly 60 percent of the new guidelines Honeycutt’s team derived for outdoor air quality were less protective than analogous numbers used by the EPA and by California, where guidelines are among the strictest in the nation.

A year after its benzene announcement, TCEQ released a new cancer-risk guideline for another high-profile chemical: 1,3-butadiene, which is produced by the synthetic rubber industry and can cause leukemia. Texas is responsible for the majority of the nation’s butadiene emissions.

Ron Melnick, a scientist formerly with  the National Institute of Environmental Health Sciences, analyzed TCEQ’s 139-page description of its decision-making process on butadiene for InsideClimate News. Comparing the Texas approach with the EPA’s, he said Texas “dismissed anything which might have made the risk seem higher than what they wanted.”

Such glaring discrepancies are possible — and legal — because the federal government rarely sets legally enforceable air-quality standards for chemicals it assesses. That leaves each state to come up with its own approach for each chemical, which means different states set different levels. A chemical release that could trigger a public-health alert in California, for instance, might not even be noticed by Texas regulators.

“It’s confusing, because you cross the state boundary, and the toxicity of the chemical changes,” said Loren Raun, a health scientist who works for the city of Houston and teaches at Rice University. “That right there is a problem.”

Few Texans are aware that Honeycutt’s office is changing the state’s air-quality guidelines. Because the standards are not legally enforceable, the toxicology department can update them without public hearings or approval from top officials, according to former TCEQ Commissioner Larry Soward.

When TCEQ released its benzene proposal in 2007, the only person who submitted a public comment was a representative of a chemical trade group, who urged TCEQ to further weaken the guideline. The agency refused.

Soward, who was one of the TCEQ’s top three officials when the benzene guideline was changed, said he didn’t learn of the revision until InsideClimate News asked him about it in July. Soward left the agency in 2009 and spent several years working for Air Alliance Houston, an environmental group.

When Soward was appointed a TCEQ commissioner in 2003, he said, he often met with Honeycutt to discuss public health issues and thought the toxicologist “was a very scientific-based, impartial person.” By 2005, however, Soward felt Honeycutt was advocating for “positions he felt like he was supposed to advocate” for, regardless of the science.

“I think he really believes … that air pollutants don’t really have a health effect unless there’s such a toxic exposure to them that it leads to direct problems,” Soward said. “I used to joke that I didn’t think there was a toxic pollutant he didn’t like.”

“For the past 20 years, you’ve either had oil industry [George W.] Bush or oil industry apologist [Rick] Perry making all the appointments,” said Burnam, who was defeated in the March Democratic primary and leaves office this month. “The good [employees] at the lower levels are totally frustrated and hamstrung.”