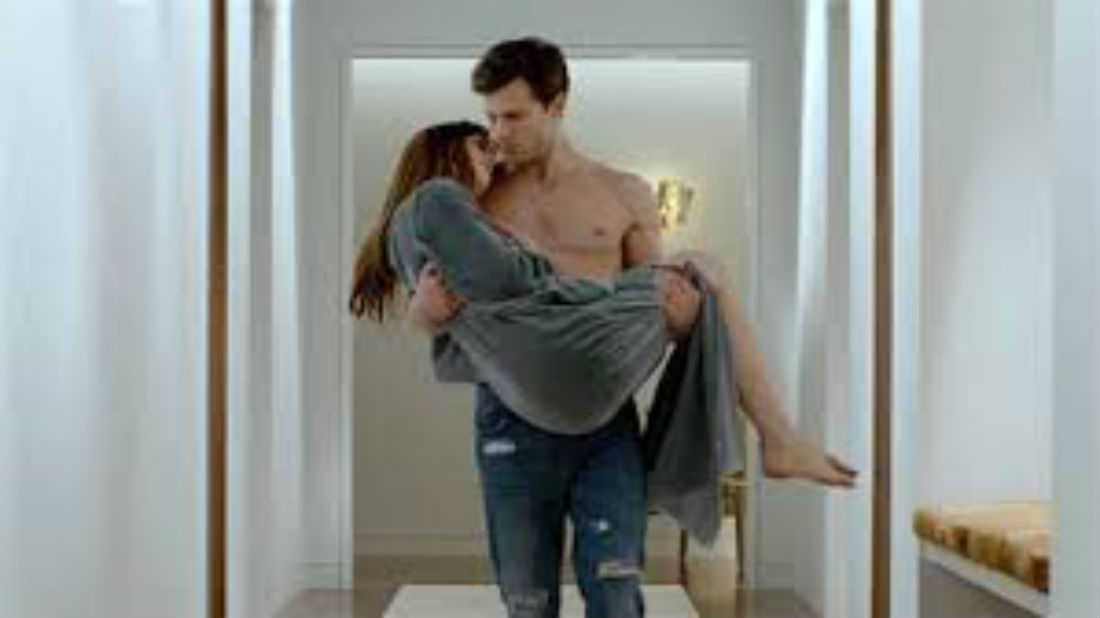 So I finally saw Fifty Shades of Grey. It was less terrible than I feared, but still fell well short of being good. Let’s break this down:

I’ve only read enough of the book to appreciate the awfulness of E.L. James’ writing. Still, as you’ve heard unless you’re completely cut off from the culture, the book is about English-lit grad student Anastasia Steele (Dakota Johnson) meeting telecom billionaire Christian Grey (Jamie Dornan) and discovering the taste for sadomasochism lurking behind the young mogul’s carefully groomed façade.

Is it me, or does every woman who works for Christian’s company look like she’s carved out of wax?

Okay, I think I know why this caught on even though it’s crap. This is the fairy tale about a damsel being rescued by a rich, handsome prince, only to discover that the prince is actually a severely damaged little boy deep down inside, and he needs some saving himself. It’s childish fantasy, but if there’s one thing I’ve learned about movies, it’s that they wouldn’t exist without childish fantasies. The way this film works its archetypes is reasonably clever, though I would point out that Pretty Woman worked exactly the same way 24 years and 11 months ago.

The other movie that this reminded me of is A Dangerous Method, a talky piece that I nevertheless found interesting, and one that features Michael Fassbender spanking Keira Knightley until she achieves orgasm. I’d recommend that movie over this one.

Fifty Shades is surprisingly funny, in a way that the book is not. The first hour or so plays like a romantic comedy to a large extent. Christian surprises Anastasia by turning up at the hardware store where she works, and it’s funny when she gasps in surprise. (On the other hand, the fourth time it happens, the joke has gotten old.) Funnier still is the early scene when she gets a call from him at a nightclub and drunkenly makes fun of his moodiness: “Come here! I want you! No, no! Go away!”

Still, the moment when Anastasia walks out into a rainstorm after her first meeting with Christian and takes a deep breath in while getting pelted by the rain? That’s when the alarm bells started ringing in my head.

By the way, does anybody still work at a hardware store? I thought they all got swallowed up by big-box retailers like Home Depot.

There’s no chemistry between the actors, and I think it’s on Dornan. He seems to miss the neuroses that drive this man. Anastasia’s early description of Christian is “really intense and intimidating,” and I got neither of those things from the actor. Dakota Johnson (the real-life daughter of Don Johnson and Melanie Griffith, and whom you saw as the Stanford girl introducing Justin Timberlake to Facebook in The Social Network) falls short in some of the more emotional scenes, but she still shows enough that I’d be interested to see her in non-Grey material.

The sex scenes don’t interest me. (Actually, most sex scenes in movies don’t interest me, but that’s another issue.) Director Sam Taylor-Johnson, who previously made Nowhere Boy, fumbles the first one severely, switching between shots of Ana’s head lying at the left of the screen and shots of her head at the right of the screen, with no reason. It’s a challenge to make a film interesting when so much of it is taken up with sex scenes, and Taylor-Johnson seems to sense it. She tries to introduce character developments with successive ones. They don’t take, though.

What else? Damn, did Anastasia and Christian really spend all that screen time negotiating the terms of the sex contract he wanted her to sign? And did it all really end with them deciding that the contract didn’t matter? What a waste of time!

Also, there’s two postcoital scenes where Christian goes to his grand piano and plays pieces by Bach and Chopin. These are cheesy enough as it is, but as a classical music guy, I also noticed that Jamie Dornan’s attempts to mime playing the piano are really bad. The way he bobs up and down on the Bach piece is totally fake.

On the bright side, I saw a bunch of trailers for female-centric movies coming up, some of which I was excited for (Pitch Perfect 2), some I was intrigued by (Aloha), and some I was depressed by (The Longest Ride). Seeing so many films about women promoted in one place was a refreshing change from my usual moviegoing experience.