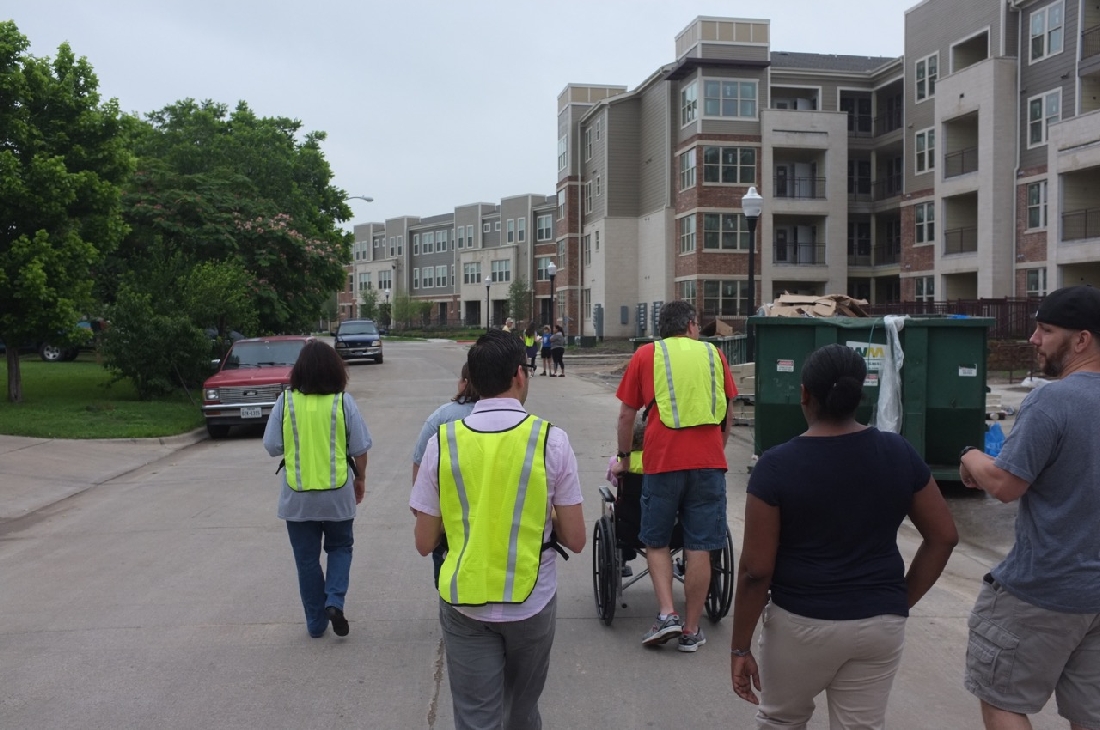 It can be easy to fall into what some in the urban planning world call a “windshield perspective,” unable to see past the confines of one’s car, and not really understand the finer details and challenges about what it’s like to move around a city on foot. Fortunately, the best way to rectify this condition is also the simplest: Get out and walk. It becomes very clear, very quickly, just what your city does ­­–– and doesn’t do –– to make walking a legitimate and respected form of mobility.

I recently had the opportunity to attend an event that addressed the matter, a “walking audit”  hosted by the AARP. This particular audit concentrated on the rapidly changing neighborhood known as Linwood, which is surrounded by the huge projects of the West 7th Street corridor. For decades, Linwood has been an area of modest homes and duplexes, but now the ever-advancing glacier of redevelopment has arrived, and high-end townhouses and large apartment developments are cropping up. With the reinvestment in the neighborhood, it’s important to pay attention to how the human environment –– both private and public –– is being shaped to make the area conducive to walking.

A group of around 20 Fort Worthians (including District 9 council representative Ann Zadeh) joined a team from the AARP for the event. After a presentation explaining some of the concepts behind designing walkable cities, the group walked around and through Linwood, taking note of everything from the size and consistency of sidewalks to the width of streets and the way development projects interacted with the public realm. Along the way, participants filled out survey forms, indicated issues they spotted, and discussed ways the pedestrian experience could be improved.

Given that Fort Worth has only recently started paying attention to issues of walkability, it’s not surprising that the group spotted more than a few problems along the walk. Large swaths of the area lacked sidewalks, and the few that were there were often cramped and shoddy. Some of the new development extended out to the street, not with friendly porches and entrances, but with blank, deadening garage doors. One new apartment building had built a sidewalk with no access ramps for wheelchairs. There were no street trees along the curb to provide shade and a barrier from traffic. Carroll Street, the neighborhood’s western boundary, had no safe crosswalks (and most Texas drivers aren’t particularly keen to stop for people waiting to cross the street).

The largest development adjacent to the neighborhood, the Montgomery Plaza project, which includes the massive Montgomery Ward building and a strip mall behind it, also houses the neighborhood’s primary grocery store. Due to the project’s suburban-style design, there are no pedestrian entrances of any kind. The sidewalk is separated from the property by hedges and shrubs, forcing pedestrians to enter through busy driveways leading into the parking lot. It’s a prime example of why a city shouldn’t settle for an “all development is good development” stance, as that development’s short-sighted design is now at odds with the area’s increasing pedestrian-oriented nature.

These problems aren’t insurmountable. It will take dedicated public activism combined with smart budgeting by the city to turn areas like Linwood into places that feel like they belong to all users. Learning what to look for and what to ask for is an important step in giving us the civic tools to remake our neighborhoods into better places for people.