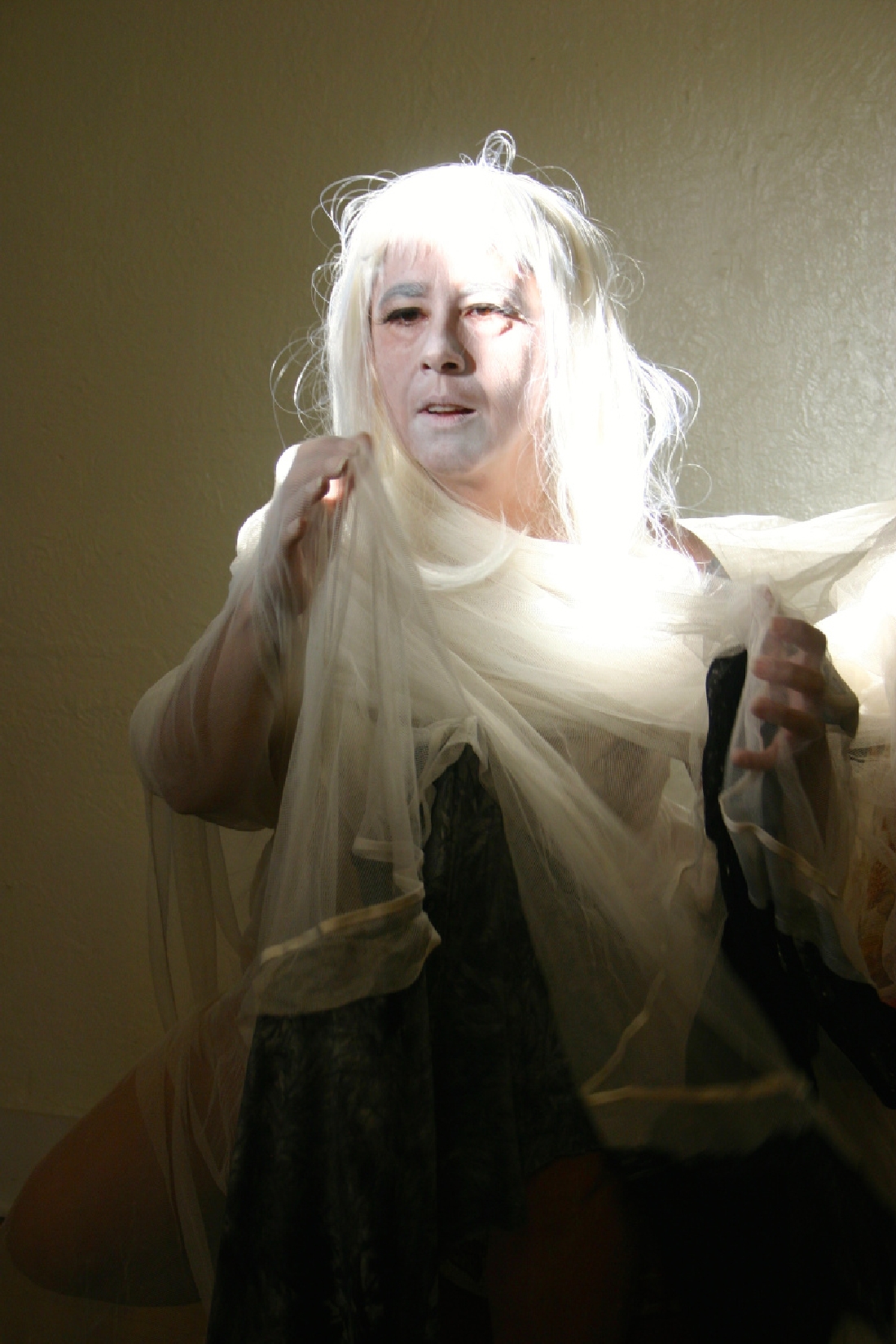 If Terry Horn says Beyond Words is a work in progress, I’ll believe him –– grudgingly. This collaboration between his sonic art project, Momentary Gamelan Ensemble, and choreographer/dancer Rosemary Candelario that was performed on Saturday night at the Grackle Art Gallery looked ready for prime time.

Performed in Japanese Butoh style with accompaniment by MGE duo Horn and Mike Kitchens, Beyond Words explores mental illness and Horn’s fractured relationship with his late mother. Entering the space, the audience only saw Candelario – an ominous figure with white make up, eyes closed, wrapped by layers of blankets on a still rocking chair.

This was the trio’s first presentation outside of their rehearsal studio. The Grackle, an Arlington Heights bungalow, was a curious choice. While it plays host to local artists who can’t afford a gallery representative or the comfort of a studio, the Grackle is also choppy and tight. The artists were clearly prepared for the challenge, as were the 25 audience members who crowded into the space.

Eventually Candelario opened her eyes and slowly unraveled the layers. For the remainder of the performance, she remained confused, lost, but also curious, gravitating between childlike fascination and fear of the unknown world around her. For more than an hour, she explored the homey space, playing with natural light from the setting sun and an array of light bulbs emanating from an empty room and an equally spare kitchen.

Improvisation is an important skill in Beyond Words, as important as technique. MGE showcased their adaptability and improvisational skills with a blend of electronic and traditional instruments. But Candelario was in charge, engaging the audience and channeling Horn’s deep emotions.

Candelario, a dancer and dance professor at Texas Women’s University in Denton who studies Butoh, an avant-garde movement born during the uncertain post-war Japan period, delivered a piercing and emotionally charged performance. Her energy was raw and engaging. She was intense but gentle, attentive, and sensitive to Horn’s story.

Performing in a space like the Grackle, as opposed to a stage like the Scott Theater, fueled the performance’s intensity too.

The show ended on a cliché, with Candelario walking from the house into the backyard and out a wooden garden door. You don’t exactly know where she goes, which may explain the suggestion that Beyond Words is still a work-in-progress. Whether or not the artists will accept that their piece, like life, must end, the show is nonetheless ready for prime time.