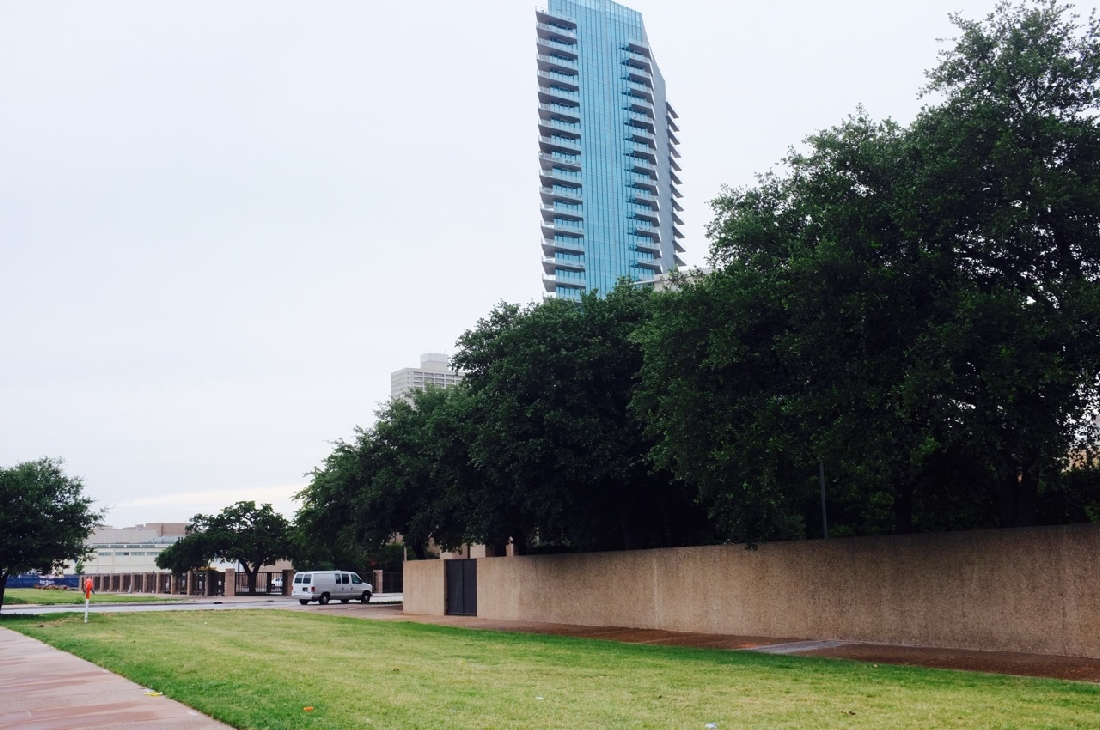 When the Water Gardens opened in 1974, the south end of downtown was not a pleasant place. Lancaster Avenue, which had once been a street lined with buildings and activity, had become a high-speed divided road with a massive overhead freeway casting a dreary shadow over the area. The interesting architectural variety of the old Hell’s Half-Acre neighborhood had been wiped out for construction of parking lots and the monolithic Tarrant County Convention Center, its arena landing like a UFO in the heart of downtown. Into this environment, devoted nearly exclusively to cars instead of people, the Water Gardens provided an oasis and escape from the blight of post-war downtown.

Fast-forward to the present day and you’ll find a different environment in the south end of downtown. The I-30 overhead has been relocated (if not truly removed), Lancaster has been re-narrowed and fitted with large sidewalks and public art, and the many parking lots are slowly but surely being replaced by new development, bringing people and energy back to the area. The Water Gardens has benefited, and from a long-overdue restoration and safety enhancement. But one aspect of the park’s original design needs to be re-thought: the solid, unbroken concrete wall that divides the park from Lancaster Avenue.

The wall was perhaps understandable in its original context, with Lancaster being a mess of speeding cars, huge swaths of pavement, and I-30 looming overhead. Nobody wanted to be on the Lancaster, so the Water Gardens were walled-off from it. In the ensuing decades, though, we’ve learned a lot about what makes a healthy, livable urban environment. One of the things on the Do Not Do list is long, blank, unbroken concrete walls that create dead spaces in the environment and discourage people from walking.

As Lancaster redevelops and adds more residents (a brand-new apartment building, Pinnacle Place, is already underway a short distance west, across from the grand historic Post Office), the development along the street must be configured for the most basic building block of the city: the pedestrian. To this end, it’s time for the south end of the Water Gardens to be opened up, to both encourage visitors directly from Lancaster and to make Lancaster an even more appealing place. This could be done in a manner that would maintain the architectural integrity of the Water Gardens, while still improving it in the context of the modern city. Perhaps there could even be a space created for a food truck or small cafe at the corner of Lancaster Avenue & Houston Street to further integrate the park into the reborn street.

Opening up the south wall would enhance both the park itself and Lancaster. It’s an opportunity to build on the park’s many merits while helping correct some of its unfortunate, cold and anti-pedestrian 1970s tendencies. It’s time we bid farewell to one of the last vestiges of the old, broken Lancaster, and integrated the south end of the Water Gardens into the new neighborhood.