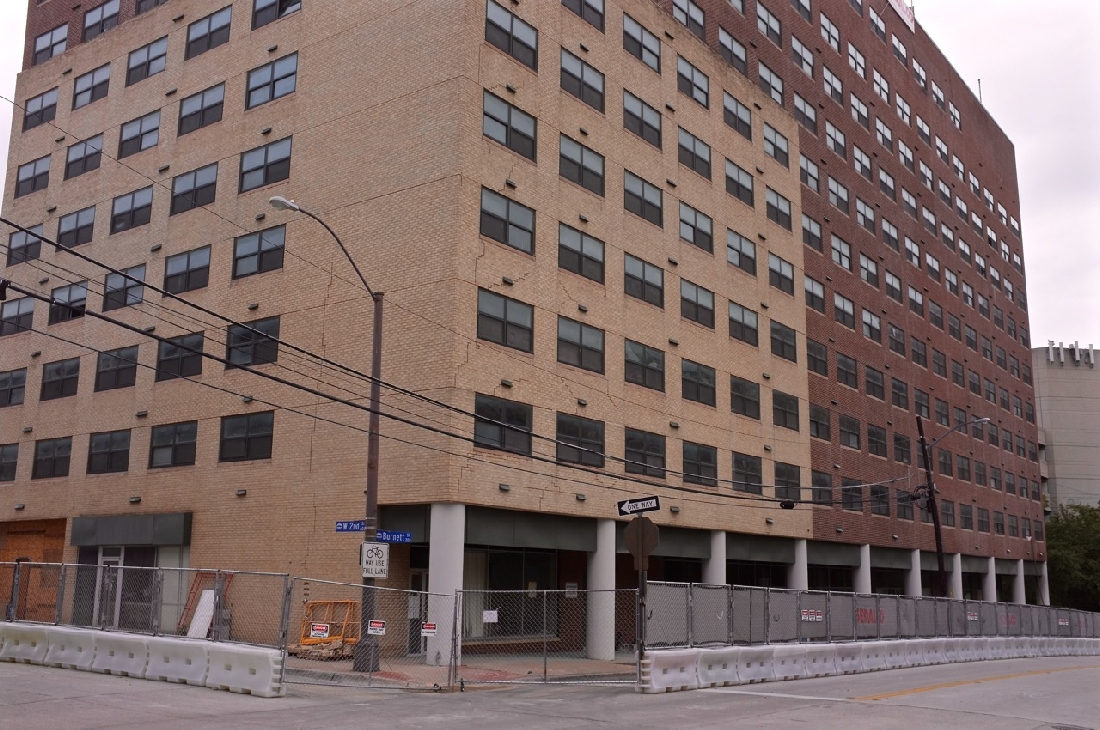 One of downtown Fort Worth’s most under-the-radar buildings is getting a new lease on life. The 11-story 1950s tower known as Hunter Plaza, located at Burnett and West First streets, opened as a hotel. The blocky tower has been owned by the Fort Worth Housing Authority since the early ’70s. Most recently, it was home to disabled and elderly residents. Forced to close after a bedbug infestation, the Plaza has been sitting vacant for five years.

The building is on its way back, with work now underway to redevelop it into a mixed-income apartment building with 164 units and ground-floor retail space. Far from the small rooms and kitchenettes of its previous life, the reborn Hunter Plaza will feature full one and two-bedroom apartments.

On the exterior, the building’s 1950s appearance is intact and will be preserved, and the housing authority plans to add a new parking garage to the rear. Some aspects of the original interior will be kept as well. The units will feature loft-style exposed concrete ceilings, wood floors, and modern conveniences.

The building is located in one of the less active areas of downtown behind the central library and just west of the recently redeveloped former Tandy Center. Bringing new residents and retail to this area may help drive further redevelopment of the various parking lots and older structures located nearby.

Work is now in progress, with construction fencing up around the site. The project is expected to be complete by the end of the year, giving downtown Fort Worth more residences and bringing new attention to an often-overlooked piece of architecture.

If you’ve been wondering what’s happening with all the dirt moving along Lancaster Avenue’s north side, across from the historic Post Office and T&P buildings, it’s construction getting underway for Pinnacle Bank Place, a brand new mixed-use development.

The project is the first new construction in many years on the north side of Lancaster. The land was once occupied by the street itself, when it was wider and featured an interstate highway looming overhead. Since the removal of the highway and the re-narrowing of the street, the city has been slowly assembling the leftover right-of-way to redevelop and return Lancaster to being a pedestrian-friendly boulevard.

Pinnacle Bank Place will rise to five stories and feature ground-floor retail space with 130 apartments upstairs. As implied by the name, Pinnacle Bank will move into one of the ground-floor spaces and operate a drive-through bank from the parking garage in the back. 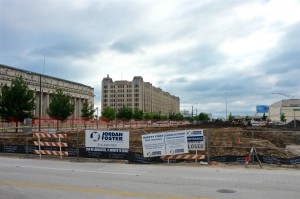 Redeveloping the old right-of-way along the north side of Lancaster will bring some life and energy back to the street at long last. The construction is part of the city’s efforts to undo a series of anti-urban mistakes made back in the 1960s. The Lancaster renaissance began with the removal of the I-30 overhead and continued with the redesign of the street, the redevelopment of the T&P railway station, and the installation of the “Avenue of Light” sculptures along the median. Filling out the vacant land is the next step, along with hopefully getting the T&P warehouse redeveloped and further improving public space along the street (by improving the Al Hayne Memorial Park and creating a public plaza in front of the T&P station, for example).

Pinnacle Bank Place is expected to be complete by the first quarter of 2016.