In November 2014, I met with a group of law enforcement officers at Coopers BBQ in Fort Worth and twice more over the following months. While skimming the paperwork and reports I was given, I listened to the guys talk about work, family, hunting –– this could be any group of family men. When we got to the subject of the gang unit, however, the mood changed. They looked me in the eye as they told me they felt betrayed, and they spoke with pride about the gang members they helped get out of the gang life and the drugs they took off the street. There was no bravado or posturing. Doing the right thing no matter what seemed to be the recurring theme. And these guys got visibly angry and distraught when they talked about the political maneuvering they had to engage in just to do their jobs. Some of these guys were Arlington police, some from other agencies, but all of them were bitter over the treatment of Paul Balson and the Arlington gang unit in general. The Arlington officers knew they could lose their jobs just for talking to me, but they felt their story needed to be told. 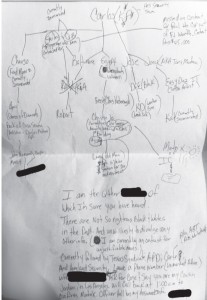 Steering clear of the fallout from the Gillon Drive incident, the unit shifted its focus from street gangs in South Arlington to cleaning up the Aryan Brotherhood drug network. In March 2010, Balson started working with the Tarrant County Drug Task Force, which included officers from other police departments. The street name “Baltimore” came up repeatedly in jailhouse interviews and through street informants. At the same time, during the task force’s prosecution of the Aryan Brotherhood in Houston for various violations of the Racketeer Influenced and Corrupt Organizations Act, the FBI kept hearing about a drug dealer in Arlington known only as “Baltimore,” who supplied the Aryan Brotherhood with cocaine and meth. All that was known at the time was that he was associated with the Mexican Mafia and had family living in Mission, Texas.

Department of Public Safety officer Monte Dirickson and the FBI agent for the Fort Worth-Dallas area contacted Balson for help, requesting all the information he could obtain on Balitmore. Balson concentrated his jailhouse interviews on identifying Baltimore, and his interview skills were getting results.

Balson is “the best cop I ever worked with, and he does it for the right reasons,” said a former Arlington police officer who wished to remain anonymous. “He’s not vicious or mean. He can arrest a guy and then sit there five minutes later and talk to him, and he’ll treat him like a gentleman whether [the suspect] gives him information or not.”

Balson said that during these interviews, an admitted member of the Aryan Brotherhood said that the person codenamed Baltimore was the guy running the drug house that the C.O.P. volunteer had located, Solis. The gang member-turned-informant showed Balson storefronts, houses, vehicles, and associates who were all part of the drug operation. For his help, the informant was given leniency on pending charges and later became a confidential informant for the FBI, even making a meth buy for the agency.

The informant also detailed how the Aryan Brotherhood was using one of Bowman’s projects to get away with crimes in Arlington. Bowman had implemented a feature on the department’s website in which citizens could monitor in real time the location of officers responding to calls.

“I brought to light that the Aryan Brotherhood and a bunch of other gang members were monitoring the police internet site,” Balson said, “which at the time showed when officers were dispatched and when they were on their way” to a crime scene.

The criminals would monitor the website and use two-way radios to warn their members that police were on the way.

“The informant told me, ‘We’re not going to commit any crimes outside of Arlington because we have an internet site showing when officers are coming to get us,’ ” Balson said. “Bowman was real bitter about that because that was his baby, and he was real angry because I brought that out to light, and he had to change it.”

Balson expanded his intelligence gathering to jails in Tarrant, Dallas, and Parker counties. Attempts to work within his own department were met with resistance.

“I attempted to get Arlington PD Narcotics involved, but the narcotics sergeant at the time showed little interest in working with the gang unit,” Balson said. “However, I had an ongoing relationship with Tarrant County Narcotics Task Force, and due to the numerous areas that [the man known as] Baltimore was associated, it worked well to have Tarrant County working the narcotics.”

ICE invited Balson to attend their Aryan Brotherhood task force meetings, multi-jurisdictional intelligence sharing sessions relating to the RICO case being brought by attorney David Karpel of the Department of Justice’s Organized Crime and Gang Section. The ICE gang unit began assisting Arlington and helping with surveillance and arrests. The task force declared Solis a person of interest. Balson was supposed to provide information to the FBI agent, who would then disseminate that information to state and federal agencies. But, Balson said, the agent refused to follow up on any leads.

“Due to the [FBI agent] being busy with so many other leads, he requested that we keep working Arlington and provide him with all information for him to utilize in the federal case,” Balson said. “While working this case, there were numerous occasions that I provided [him] with information about Baltimore that I later learned never made it to DPS.”

After the agent failed to pass on the information, Baldemar “Baltimore” Solis slipped through the cracks. For that reason, he has been hard to locate for a response for this article.