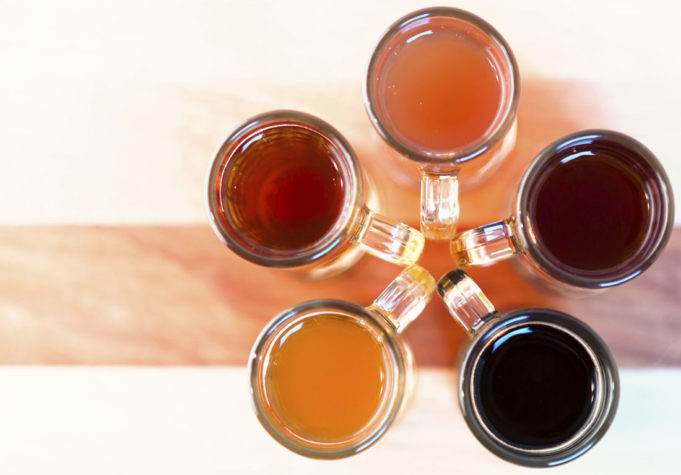 Just when I think I’m over “craft culture,” I end up popping into some new place with reclaimed wood on the walls and chalkboards covered with lists of obscure, mythical ales and realize that I should just STFU and enjoy it. At least it looks nice, right? For my love of all that is low-rent and divey, it’s tough to hate on an aesthetic whose only offense is trying to be top-quality. I guess if having to put up with the preciousness of artisanal mustache wax and locally sourced toothpicks is the price of drinking better beer and eating fantastic sandwiches, I’ll just whip out my VISA card and poke around Etsy. Or I could fill up a huge bottle of craft beer at Dagwoods Grinders & Growlers.

Full disclosure: I went to Dagwoods not for a beer but for its namesake sandwich, a nice piece of tri-tip (wood-charred Akaushi beef, if that means anything to you) served between thick wood-grilled sourdough slices and piled with leeks, a juicy slice of beefsteak tomato, blue cheese crumbles, and a fried egg. The menu makes a point to let you know it’s a “hen’s” egg, in case customers are under the impression that eggs also come from roosters (and have a preference between the two, I suppose). More likely, it’s because “hen” is craftier-sounding than “chicken.”

I would love to tell you more about this sandwich. Like how if you accidentally knock the accompanying ramekin of roasted bone-marrow jus (yes, it’s a thing, and, yes, it’s delicious) across your tray, soaking the bottom slice of bread, the Dagwood becomes an incredible knife-and-fork affair. Or how a bite of tomato, smoked rosemary aioli, and –– so help me –– fried hen’s egg made the sourdough exquisite with a small chunk of the blue, even if you’ve already eaten all of the steak and are more or less cleaning your plate. But since this is a column about drinking, I have to mention that sandwiches are but one of Dagwoods’ signature offerings. There also are growlers and 24 craft drafts, many of which are Texas-made.

As fall is nearly upon us, I wasn’t surprised to see local stouts like Lakewood’s Temptress, Best Mistake from Lewisville’s Cobra Brewing Co., and Grapevine Craft Brewery’s Nightwatch. Martin House’s Septemberfest is also on tap, as well as Rahr’s Pecker Wrecker, while the rest of the taps rep out-of-state breweries like Stone, Ballast Point, Founders, and Upslope. On Mondays, Texas drafts are $4 a pint, and if you buy an official Dagwoods Grinders & Growlers growler, you can fill it for half-price every Tuesday.

Perhaps more interesting to me than Dagwoods offerings (which were plenty interesting, don’t get me wrong) was its location, among the storefronts that ring the north end of Ridgmar Mall. I don’t know when the last time you drove over there was, but even if it was in the ’90s, you probably wouldn’t notice much difference. For whatever reason, the West Side seems pretty resistant to craft culture, but Dagwoods sticks out of its strip of weathered, frumpy retail space like a gold tooth (engraved by hand) in a pirate’s mouth. But you can’t fault the place for dressing up, and Dagwoods’ decorative touches (reclaimed wood –– natch –– plus a couple of deer trophies and tall menu chalkboards) might inspire its neighbors to do some remodeling. Besides a memorable sandwich, cheerful and informative staff, and a robust selection of high-end beers, Dagwoods is a reason to visit a part of town many people may have written off. –– Steve Steward