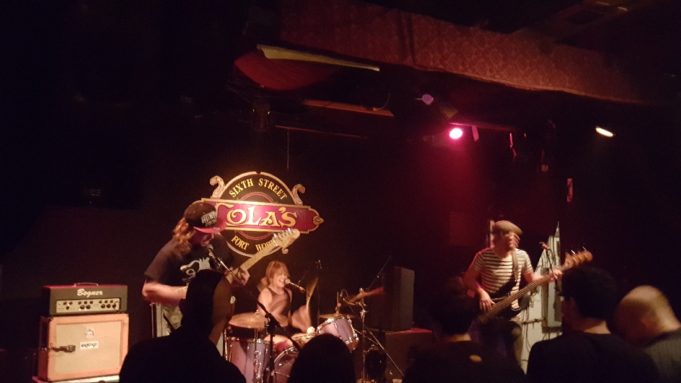 “Party Rock” is a term that usually makes me cringe. I can’t pinpoint exactly what it is that throws me off about the phrase. Perhaps it is the fact that my mind immediately thinks of a five-piece band of dads playing top-40 hits on the Capital Bar patio, but when I hear it used to describe a band I tend to immediately zone out. That being said, every time someone suggested I go see Beaumont trio, Purple, it was followed with, “it’s a total party, man.” Cue the noise of the Death Star powering down in my head. I immediately write off that person’s future band recommendations. But Friday night I decided that I had heard enough great things about Purple from enough people that I ventured to Lola’s (2736 W 6th St, 817-877-0666) to check out the so-called “party” for myself.

I couldn’t have been more glad that I did. Purple took the stage right around midnight, and for the hour that followed I felt like I was being slapped across the face with a bottle of Jack Daniels. Drummer/vocalist Hanna Brewer sets the tone for the band with her Karen O-by-way-of-Iggy Pop howls and flailing arms reminiscent of Animal from “The Muppet Show.” Brewer isn’t the only dynamic presence onstage. Guitarist Taylor Busby – who, when called on for lead vocal duties, delivers cries that are reminiscent of a Sparta-era Jim Ward – and bass player Joe Cannariato round out the band’s high-octane lineup.

The three-piece wears its musical influences on their ripped denim sleeves. They hark back to a garage-punk sound that draws from the canon of mid-to-late ’90s and early 2000s alt-rock, nodding at bands like Red Hot Chili Peppers and Nirvana without sounding like a complete ripoff. With the state of the Fort Worth music scene being littered with ’90s themed shows (see this coming Saturday’s 2nd incarnation of the Panther City Pep Rally featuring a double-digit roster of bands playing covers of ’90s bands that is sure to be a complete blast), it is no surprise that Purple’s fusion of sounds from that era has earned them quite a loyal following around these parts.

A Purple show is indeed a party, and hopefully the next time I hear someone use that word to describe a band my mind will picture a beer can-littered house show instead of the exploding Death Star. The trio returns to Fort Worth October 3, headlining a stacked bill that also features Panic Volcanic, Animal Spirit, Dead Vinyl and Vodeo (formerly Shake the Moon) at Magnolia Motor Lounge (3005 Morton St 817-332-3344).