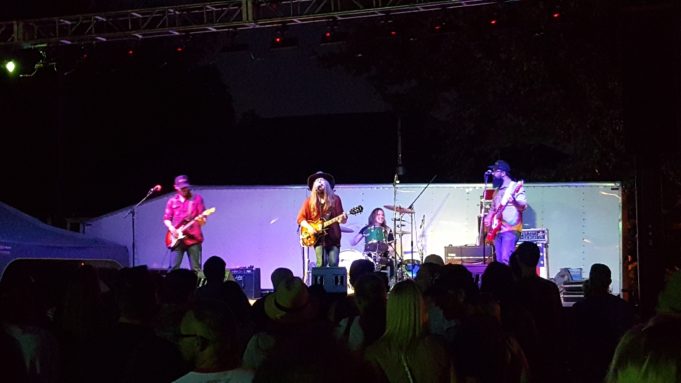 This past weekend presented the people of Fort Worth with no shortage of things to do. From the final Friday on the Green of the year to both the Rangers and Cowboys playing home games on Sunday and The Burrito Project Benefit that same night at Lola’s, there was plenty to choose from if one didn’t fancy sitting at home. The marquee event of the weekend though was Saturday’s Arts Goggle on Magnolia Avenue.

Now in it’s 12th year, Arts Goggle has grown bigger than ever with more than 600 visual artists displaying their work just about anywhere there was free space to set up. Booths were set up down the center of Magnolia Avenue, every restaurant/bar/retail space was being used as gallery spaces, and displays overflowed into the side streets and beyond. There was art literally everywhere you turned –– think downtown’s Main Street Art Festival injected with Near Southside flair.

If visual art is the backbone of Arts Goggle, live music is the festival’s circulatory system. More than 70 bands from all over North Texas played sets in venues both typical (The Boiled Owl, Avoca) and uncommon (the roof of Kent & Co., anyone?). Just about every set I saw drew crowds that would be impressive at half their size. At times it felt as though Arts Goggle was a local music festival first and art show second.

The venue that impressed the most was The Chat Room Pub (1263 W. Magnolia Ave. {76104} 817-922-8319). When the bar first announced it’s lineup featuring some of the biggest names from the area, many of whom could headline shows at venues 10 times the capacity of the Chat, those familiar with the bar wondered how the space was going to house such a collection of heavy hitters. The solution? Put up a stage that could rival many major music festivals setups in the bar’s back parking lot, throw a gate around the place to keep the TABC in check, and serve enough cold beer to make everyone forget how freaking hot the sun beating down on the asphalt actually was. 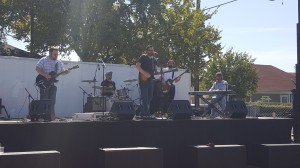 Kevin Aldridge and the Appraisers had one of the strongest sets of the day at a time when the sun seemed to be at it’s hottest. Aldridge’s songwriting is best compared to Ryan Adams or Jason Isbell, and on most days you can really hear those two songwriters influence in his work. But Saturday he kicked into another gear, channeling Roy Orbison’s melancholy-yet-hopeful tone on songs like “Aimless & Alright” and “Layin’ Around.” By the time the quintet launched into their set’s closer, the Jayhawks-esque new single  “Winner Leaves Town” (available here), a steady breeze started to make its way across the parking lot, hinting that the hottest part of the day might have finally passed.

Not surprising in the least, the biggest crowd of the day gathered to see Fort Worth’s Quaker City Night Hawks. The four-piece is no stranger to packed shows around these parts, and Saturday night, their last hometown show before heading out on a tour through the Midwest, was further proof of why they are considered one of the best live bands in the business. Mixing songs from across their catalogue, live staples such as “Fox in the Hen House” and “Bible Black Lincoln” with tracks from their new album that should be released early next year, Quaker City’s “boogie blues rock” had the entire crowd dancing and singing along.

The Chat Room wasn’t the only venue with live music throughout the day, The Boiled Owl and SiNaCa both hosted bills stacked full of some of the best our region has to offer, and if anything my biggest regret was not being able to be everywhere at once.