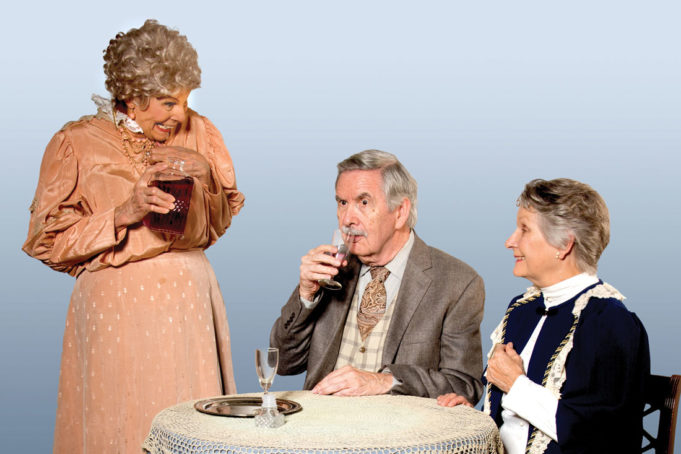 Wed 14 – Part of a cycle of plays alternately called Fear and Misery in the Third Reich or The Private Life of the Master Race, The Jewish Wife is an anti-Nazi playlet by Bertolt Brecht while he was in exile in Denmark, depicting a Jewish woman leaving her husband to save his career in Germany. The performances will be followed by panel discussions. The show runs thru Thu at UNT’s Radio Television and Performing Arts Bldg, 1179 Union Cir, Denton. Admission is free. Call 940-565-2428.

Thur 15 – It rather makes sense that Benedict Cumberbatch should star in Hamlet, a part that seems tailored to his brand of intensity, brainpower, and self-lacerating masochism. Tonight local movie theaters are showing a broadcast of a live performance from London’s venerable Barbican Theatre. The show starts at 7pm at various theaters; check Calendar for locations. Tickets are $20. Call 818-761-6100.

Fri 16 – How do Shakespeare’s bloody tragedy Macbeth and Allen Ginsberg’s alienated epic poem America go together? We’re not sure, but we’ll get an answer with The Americanization of Macbeth, a mashup being performed by an all-female troupe calling themselves The Daughters of York. The show runs today thru Oct 24 at Arts Fifth Avenue, 1628 5th Av, FW. Admission is free, though donations are accepted. Call 817-923-9500.

Sat 17 – Fort Worth Opera heads to Rose Marine Theatre to continue its outreach efforts with The Barber of Seville in Texas. This family-friendly patch on Rossini’s opera has an English-speaking Count Almaviva depending on his bilingual servant Figaro to communicate with a Spanish-speaking Rosina. It should be a nice warmup for next summer’s production of the opera in the original Italian. The opera runs Fri-Sun at 1440 N Main St, FW. Tickets are $5-10. Call 817-624-8333.

Sun 18 – Contrary to what its name may imply, Touch-a-Truck DFW isn’t a “hands on a hard body” contest. Instead, it’s a family-friendly show of more than 50 vehicles that service the community, including construction vehicles, garbage haulers, and a vintage Dairy Queen truck. Proceeds from this event benefit the Cystic Fibrosis Foundation. The event runs 11am-3:30pm at 9200 Mid-Cities Blvd, North Richland Hills. Admission is $5.

Tues 20 – William Friedkin’s The Exorcist may be broadly overrated, but it’s still a very good horror film whose techniques have been copied by hack directors ever since. The movie is showing as part of Harkins Theatres’ special showings of horror movies during the run-up to Halloween. The movie starts at 7pm at Harkins Southlake, 1450 Plaza Pl, Southlake. Tickets are $5. Call 817-310-0145.