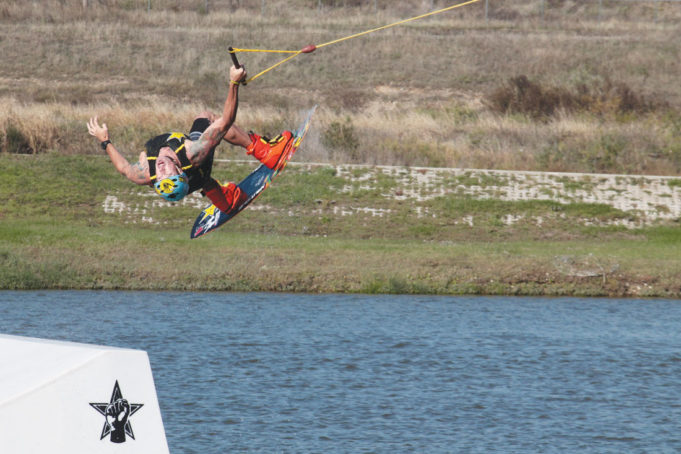 The city’s biggest wakeboard park is being resuscitated after it was flooded by Tropical Storm Bill in June. A new owner is rebuilding ramps at the donut-shaped watercourse at the West Fork of the Trinity River downtown and adding several new features, including shaded seating and a place to get food and drinks. All of this makes at least one guy really happy.

Wakeboarding is “like being Jesus for a little bit,” said Tarrant County College student Alex Purviance, “being able to walk on water.”

Purviance said his dream job is cable operating, running the system that, like a speedboat, pulls wakeboarders around a course.

The “here” Purviance is talking about is Cowtown WakePark. After visiting the park a couple of years ago, he made himself at home. Along with learning how to ride and striking up a friendship with cable operator Chris Dockstader, Purviance now volunteers at the renovation.

Once Cowtown WakePark reopens in 2016 under a new name, Republic Waterpark DFW, Purviance may get to live his dream.

The TCC student “will probably be one of the operators when we open back up,” Dockstader said.

Water levels on the West Fork, according to the USGS National Water Information System, rose by nearly 6-and-a -half feet during the last two weeks of May. These waters normally flow at low levels –– the West Fork is part of a flood control reservoir.

Since the park’s closure, Lray Villafuerte, owner of CWC Wakepark in the Philippines, bought out Cowtown WakePark and has been privately funding its reconstruction. About $150,000 worth of ramps and rails have been installed on the course. The new parts were assembled in Manila, Philippines, at a warehouse also run by Villafuerte.

After opening in 2011 (“In Progress’ Wake,” June 8, 2011), Cowtown WakePark was the city’s first full-scale wakeboard park. Only about a dozen similar parks existed nationally, with four of them in Texas. Now, the United States boasts about 30 cable parks, according to Surfer Today, an online resource for water sports. About a half-dozen are in Texas, and two are in Fort Worth: the full-sized Cowtown WakePark, with its endless loop cable hauling people around in circles, and TXMC Wake Park, which has a smaller, straight-line cable system.

“Initially, people were concerned that wakeboarding would take away from boat sales, but the more people involved in water sports, the better,” he said.

He hadn’t heard about new owners making renovations at Cowtown, but he wished them well.

“Ten years from now, that entire development over there is going to be amazing,” he said, referring to the Trinity River Project, an urban development and flood control project just north of downtown.

Phase 1 involves installing new course ramps and constructing the bar and 100-foot covered patio near the training pond. The bar will serve cold drinks, sandwiches, barbecue, and snacks –– ­­something Malloy said will make a difference for people looking to escape the heat. Cowtown WakePark offered no concessions, seating, or shade.

Construction has slowed as the new owners prepare building plans for approval by the Tarrant Regional Water District, the public entity that provides water to area residents, establishes flood control, and creates recreational opportunities such as kayaking, tube floating, and wakeboarding. The water district has already approved the installation of ramps and the waterside deck.

“We have been presented with some proposed concepts by the tenant that would bring a pro shop and dining options that are in line with what we originally envisioned for that facility,” said Chad Lorance, TRWD’s communications manager. “However, there are no specific plans for us to review at this time.”

Once those forms are submitted, TRWD will review them to make sure they meet design standards. Part of the review process ensures that all facilities are necessary to the park and can be installed without imposing on normal flood levels and water maintenance work, Lorance said.

“It is very early in the process right now, but we hope to have some more information to share in the coming months,” he said.

Though Malloy could not provide the exact numbers as to the overall cost of reconstructing the park, he estimates the project will round out to about $250,000.

Cable operator Dockstader said the park averaged 40 to 50 visitors per day before the flood. He said without the proper shade, non-riders had less fun watching their friends ride.

“I could tell that’s the reason why some people wouldn’t come out here,” he said.

But even before the floods, Dockstader saw improvements that needed to be made, such as replacing worn-down ramps.

“It should be really nice, like a completed cable park, as opposed to a work in progress, like it was,” he said.

Apart from the new amenities and management, Malloy said the new park will be similar to the original. Riders will still have the option of purchasing a day pass or riding for a set time. Many of the previous staff will remain, including Dockstader.

The health benefits of water sports like wakeboarding make parks like this important to the community, Malloy said.

“One of the biggest benefits is you get the youth out and exercising and being active and doing stuff outside instead of sitting in on PlayStation,” he said.

What gives wakeparks the advantage over public lakes is the shorter wait time, he said. As one person might have to spend an entire day on the lake to get in an hour of riding, he said park riders could cover that duration during their lunch breaks. And without having to rent a boat and pay for gas, it’s also cheaper.

Purviance is ready to reestablish the park as the place to go for fun and exercise.

“We have the best cable park in the United States, right here in Fort Worth,” he said. “I skateboarded all my life and then started getting older and getting, like, where actual injuries come and you get hurt. I took it to the water, where it’s a little more forgiving.”